Why do so many people hate Gwyneth Paltrow?

The much-despised blond actress triumphs at the Country Music Awards. Can her image be redeemed? 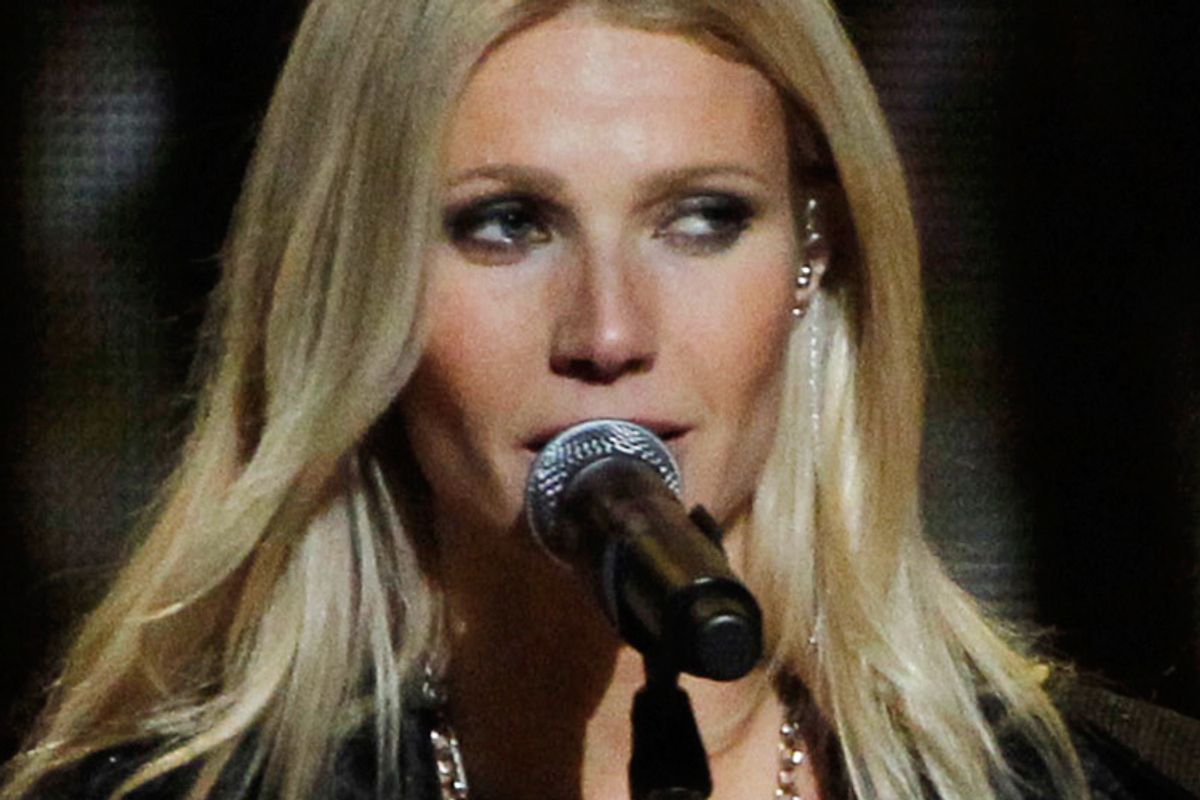 Two words for you: Gwyneth. Paltrow. Did you just shudder a little in revulsion? Did you roll your eyes in proletarian disgust? Did a low "ugggggh" sound escape your lips? You are not alone, my friend. Ms. Paltrow may be the single most despised Oscar-winning, rock star marrying, magazine cover-gracing, standing ovation at the Country Music Awards-getting woman in the world.

Gwyneth hate is nothing new, of course. Like herpes, it can lie dormant for long periods of time, but it never goes away completely. Taller, blonder, richer than thou, she has, since she launched her career 15 years ago, represented the epitome of everything most mere mortals will never come close to being, a Little Miss Perfect who had sex with Brad Pitt. But in recent years, as the economy has tanked, obesity rates have skyrocketed, and the proportion of have-nots to haves has grown exponentially, the line between Gwyneth and Everybody Else in the World has deepened into an unfathomable chasm.

The first big outbreak of Recessionary Paltrow Spite occurred in 2008, when she was tooling around Spain with Mario Batali, giving interviews in impeccable Spanish and familiarly referring to the famed chef as "Batals" and talking up her "arduous" diet and exercise regimen for "Iron Man."

This was right around the same time she launched her vanity lifestyle project Goop (the name is a twee spin on her initials), with her helpful tips on finding the best Balenciaga purses and where to stay in Paris -- how about the Ritz? Her Goop lifestyle, as Rebecca Dana wittily chronicled last year for the Daily Beast, is not for the faint of heart or light of paycheck. With all that going for her, Gwyneth was, like a splendid organic quince, ripe for the picking. Jezebel called her a "tone deaf … Marie Antoinette" and Salon's Kate Harding copped to a degree of "Goopenfreude," prompting the New York Times Styles section, in its own tone-deaf way, to boo hoo that the criticism of her was getting downright "shrill."

And now, after staying relatively out of the spotlight for two years, she's back, and she's more fabulous than ever. With nearly two months to go before the release of "Country Strong," her first top-billed, major studio film in years, she is on full-on, determined-to-wreck-your-day mode. Starting Tuesday, she's doing a guest arc on "Glee," kicking it off with a razzle-dazzle, safe-for-the-family-hour version of Cee Lo Green's (cough cough) "Forget You."  This week, her personal trainer Tracy Anderson revealed the hellish ordeal of watching her pack on 20 pounds for her role as an alcoholic country singer. "It was frustrating for me," she said, "but they wanted her to gain," adding that the effortlessly willowy Paltrow "dropped the weight immediately." If you've seen her in her black bra or clingy red dress in the trailer for the movie, you're no doubt applauding her courage for even leaving the house dragging around that much wagon.

And on Wednesday, she took the same stage that has graced Loretta Lynn, Reba McEntire and Sheryl Crow at the Country Music Awards to play guitar and sing the movie's title song with Vince Gill -- and got a standing ovation from a gracious, enthusiastic crowd of country legends.

That's pretty much Gwyneth in a nutshell. She gets standing ovations for doing stuff that isn't even her real job while the rest of us get our cars repossessed and drip pizza grease on our 4-year-old Target T-shirts. It's that appearance of endless ease, whether true or not, that riles so. Like Martha Stewart before she went to jail and loosened up, she seems to have not a single crack in her patrician façade. Even Hollywood's other reigning ice queen, Nicole Kidman, went through a very public divorce and wound up watching her new husband bounce right into rehab. Paltrow has never been caught snorting coke off a hooker, trashing a hotel room, or doing anything more horrible than starring in "View From the Top." She seems to swan through life with that closedmouthed smile fixed on her angelic face, collecting Oscars, Burberry trench coats, and ovations as her due. It's easy to see why Kathy Griffin famously referred to her as a big bag of BS.

Yet Gwyneth herself remains steadfastly above it all. To her credit, unlike a myriad of politicians and movie stars who play the game of being regular folks, she embraces her privilege and doesn't apologize for it. She may be perfect, but at least she's authentic about it. In fact, if there's only one thing she can't do, it's humility. As she told Elle last year, "I am who I am. I can't pretend to be somebody who makes $25,000 a year." That's a role plenty of us are playing with amazing accuracy these days. It's not exactly her fault that she's got so much, and enjoys it so openly. She may not be, as she sang Wednesday, "some wide-eyed dreamer that just rolled in off a dusty Midwest bus," but she's a true-blue Hollywood queen. And that, in its peculiar, incredibly envy-inspiring way, is just as real as it gets.