In today's media climate, there was something almost quaint about MSNBC's vigorous slap on Keith's wrist 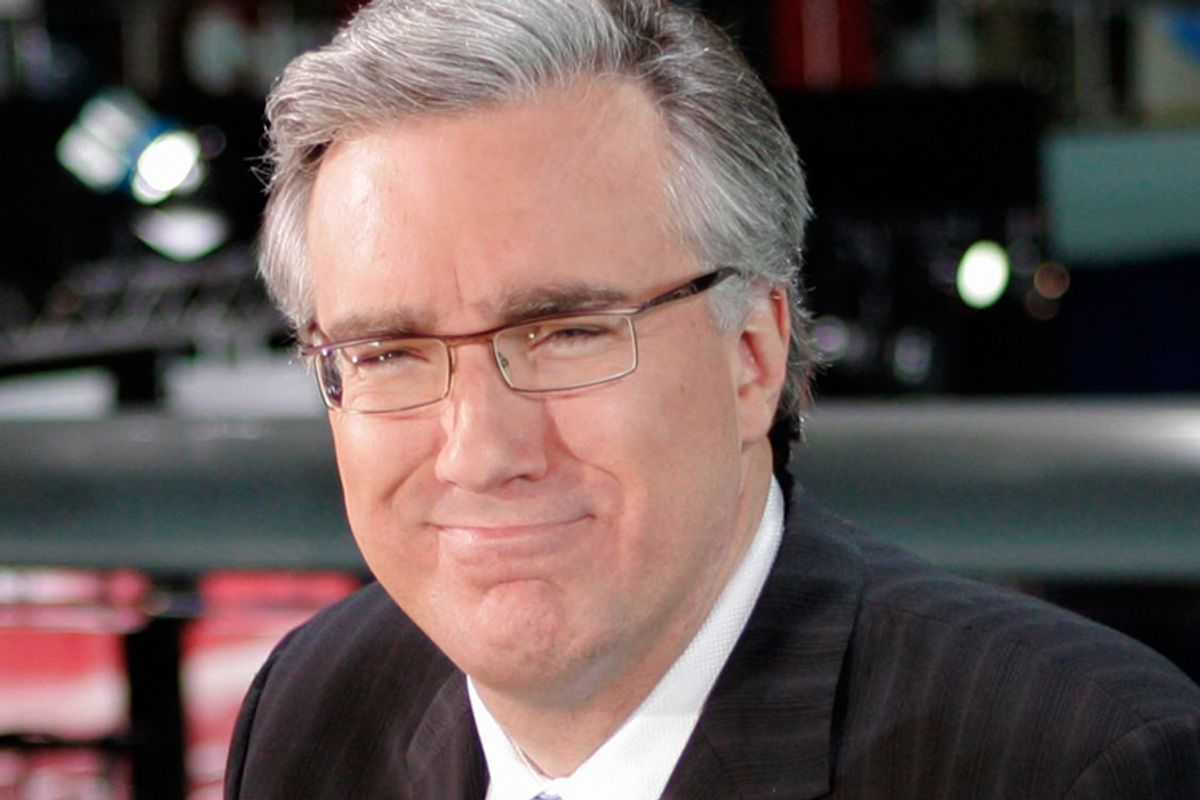 For the record, I don't buy Keith Olbermann's alibi that he didn't realize NBC News had a rule against reporters making political donations. As his frequent invocations of legendary figures going back to Edward R. Murrow make clear, Olbermann's virtually a scholar of TV broadcasting. He knew.

Historically speaking, avoiding entangling alliances with politicians was as basic to journalism as, oh, not sleeping with sources or filing stories datelined "Moscow" from Connecticut. Even on the rustic campus of Unsolicited Opinions Inc., the six-dog, one-man think tank where this column originates, we have an ironclad policy forbidding political contributions. It only encourages them.

That said, in today's media climate, there was something almost quaint and touching about the network's vigorous slap on the "Countdown" host's well-tailored wrist. Ditto for fellow MSNBC personality Rachel Maddow's defense of the network's ethics:

"I know everybody likes to say, 'Oh, that's cable news, it's all the same,'" Maddow told her audience. "Fox and MSNBC, mirror images of each other ... Yes, Keith's a liberal, and so am I, and there are other people on this network whose political views are shared openly with you, our beloved viewers. But we are not a political operation. Fox is. We are a news operation. And the rules around here are part of how you know that."

Maddow may be less than the perfect spokeswoman for objectivity in the factual sense, but her point's well-taken. People absolutely do conflate Fox News with MSNBC. I don't believe I've ever criticized Fox's practices without receiving a barrage of e-mails essentially asking, "What about MSNBC?" like 8-year-olds whining that their little brother stole cookies, too.

Even some of Olbermann's defenders, however, have wearied of his snarky tone. The influential blogger Digby wrote that he'd become a "bombastic gasbag," but our gasbag, who needed defending. After all, it wasn't as if MSNBC suddenly realized that his show had developed a partisan edge. "Countdown" is classic counterprogramming, like broadcasting figure-skating opposite NFL football.

And, yes, it's definitely come to that: Showbiz over substance almost across the board. In the fun-house mirror world of cable TV journalism, dispassionate professionalism has come to seem the lamest pose of all. It's always perilous to ignore reality, and when it comes to TV news, the United States is increasingly flying blind.

That said, I personally quit watching regularly during the 2008 presidential primaries, when Olbermann waxed indignant over Hillary Clinton's alleged racism. Sarcasm I don't mind; snark I normally revel in. What put me off "Countdown" was my sense that Olbermann, an intelligent man with what Hemingway called an excellent "shit detector," couldn't possibly believe the things he was saying.

Meanwhile, it's been business as usual over on the Chicken Little Right, with the conservative noise machine breathlessly hyping a make-believe "news story" about President Obama's state visit to India costing taxpayers a cool $200 million a day -- more per diem than the Afghan war. Supposedly 34 ships, roughly 10 percent of the Navy, had been dispatched to the Indian Ocean to guard the president, which a Pentagon spokesman dismissed as "absolutely absurd" and "comical."

The whole gang pitched in: Glenn Beck, Sean Hannity, Rush Limbaugh, the Drudge Report. As right-wing hoaxes go, it turned out to be short-lived; nothing like, say, the interminable Whitewater investigation, Saddam Hussein's WMD, Obamacare's imaginary "death panels," or any of those.

Also unlike the preceding examples, the so-called mainstream media did its job for a change, with ABC News, CNN, even the Wall Street Journal debunking the bogus allegation so conclusively that even Fox was eventually shamed into reporting that the tale was "wildly exaggerated."

No matter. Episodes like the president's Asian trip actually help Fox to masquerade as "fair and balanced" while accumulating ever more political power. Indeed, as several commentators have noted, it's no longer clear whether the GOP runs Fox News, or Fox News runs the Republican Party.

If Fox celebrities remained oddly quiet about Olbermann's predicament, that's because they not only donate to GOP candidates but make heavily promoted appearances at Tea Party rallies. As Maddow also pointed out, "There are multiple people being paid by Fox News now essentially to run as presidential candidates. (Sarah Palin, Mike Huckabee, Newt Gingrich, etc.). If you count not just their hosts but their contributors, you are looking at a significant portion of the whole lineup of Republican presidential contenders for 2012."

Meanwhile, feckless Democrats continue to act as if they're waiting for the so-called mainstream media to save them: the same worthies that gave us eight years of bogus Clinton scandals, sold Saddam Hussein's imaginary WMD like breakfast cereal, championed invading Iraq as if it were the world's biggest Boy Scout Jamboree, then reacted with horror last year when the Obama White House suggested that Fox News might not be a proper news organization.

Anyway, so Keith's back. Whoop-de-doo.