The plot to derail Nancy Pelosi

A week after their 60-plus seat drubbing, some House Democrats are balking at their leader's desire to stay 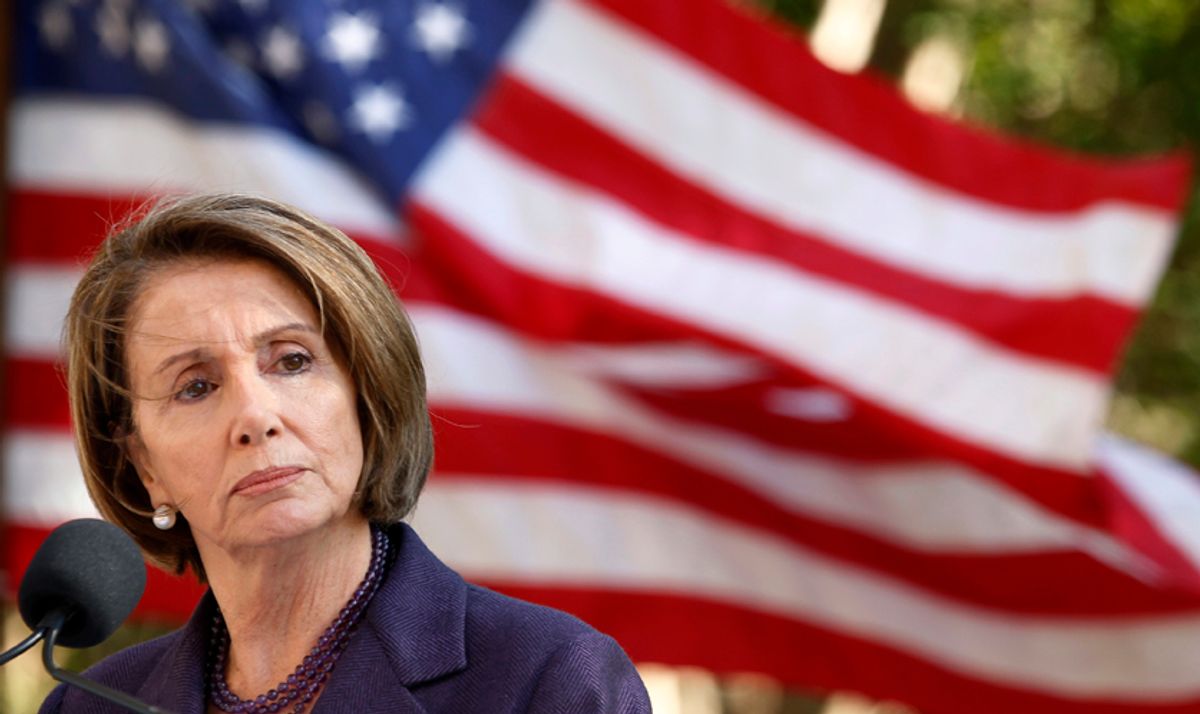 All it took to force Newt Gingrich to walk away from the GOP's House leadership was the unexpected loss of five seats in the 1998 midterms. So it probably shouldn't be too surprising that Nancy Pelosi's desire to stay on as her party's House leader in the wake of a 61-seat (at least) loss is stirring something of a backlash, both from liberal commentators  and -- more alarmingly for Pelosi -- from some of her liberal House colleagues.

The question is whether this dissent will disrupt her plans to slide into the minority leader's post when she hands in the Speaker's gavel in January.

It was obvious that Pelosi would face some Democratic resistance as soon as she announced her intentions last week. The assumption, though, was that the resistance would be futile -- maybe a token effort from one of the few remaining right-of-center Blue Dogs, like when North Carolina' s Charlie Rose waged a symbolic fight against Dick Gephardt after the 1994 midterms. But this week has brought signs of slippage for Pelosi among some of her natural left-of-center allies within the Democratic caucus. Reps. Marcy Kaptur and Peter DeFazio are now circulating a letter asking their colleagues to hold off on electing their leadership for the new Congress until December -- a delay that would give Pelosi foes a chance to build support and rally behind a single candidate. A few other House liberals, like Ohio's Tim Ryan, are also publicly expressing reservations.

As of now, this isn't nearly enough to topple Pelosi, mainly because there's no obvious challenger for dissenters to unite around. Steny Hoyer, now the Democrats' No. 2 House leader, has his own substantial base of support and would be the most obvious prospect. But he's probably a non-starter because of his long-standing rivalry with Pelosi. A Hoyer challenge would prompt soft Pelosi loyalists to harden in their support of her; the key to a successful challenge would be prying these loyalists away. Pelosi's foe would need someone less polarizing within the caucus than Hoyer.

But stature-wise, there's really no one after Hoyer who could enter the race with a formidable bloc of support. James Clyburn and John Larson, currently the No. 3 and No. 4 House Democrats, aren't viable. Neither is Chris Van Hollen, he might be an attractive prospect -- if he hadn't just overseen the Democrats' midterm slaughter as chairman of the DCCC. That leaves coup-plotters with no logical compromise candidate -- someone who could bridge the ideological gulf between the Blue Dogs who are scared of anything that makes them look "liberal" and the more mainstream Democrats who might be persuaded that it's time for a fresh direction after last Tuesday's result but who would bristle at any candidate substantially to Pelosi's right.

Pelosi, in other words, is still in good shape to hang on as the party's leader -- unless she were to decide that her continued presence is an obstacle to caucus unity. There's some precedent to consider here. After the 1946 midterms when Democrats lost 55 seats and control of the chamber, Speaker Sam Rayburn immediately ruled out staying on as minority leader in the next Congress -- a posture he adamantly maintained for nearly two months after the election. Instead, he threw his support behind John McCormack, who had been his majority leader. But McCormack, a New Dealer from Massachusetts, was unacceptable to the conservative Southern Democrats, who were then a far more significant force in the caucus. They begged Rayburn to reconsider (as did the Truman White House) and he resisted -- until McCormack, concluding that he could only win the minority leader's post after an ugly fight (and that even then, he's face bitter resistance from the Southern bloc), stood down and personally asked Rayburn to stay on. Only then, on the eve of the new Congress, did Rayburn give in and agree to serve as minority leader.

Pelosi's current situation is , obviously, much different. The dissent McCormack faced was much broader and more intractable than what Pelosi seems to be up against. Right now, she probably sees Rayburn's example -- Democrats gained 75 seats in 1948, elevating him back to the Speaker's slot -- as a better parallel. But what if more House liberals step forward and tell her it's time to go?