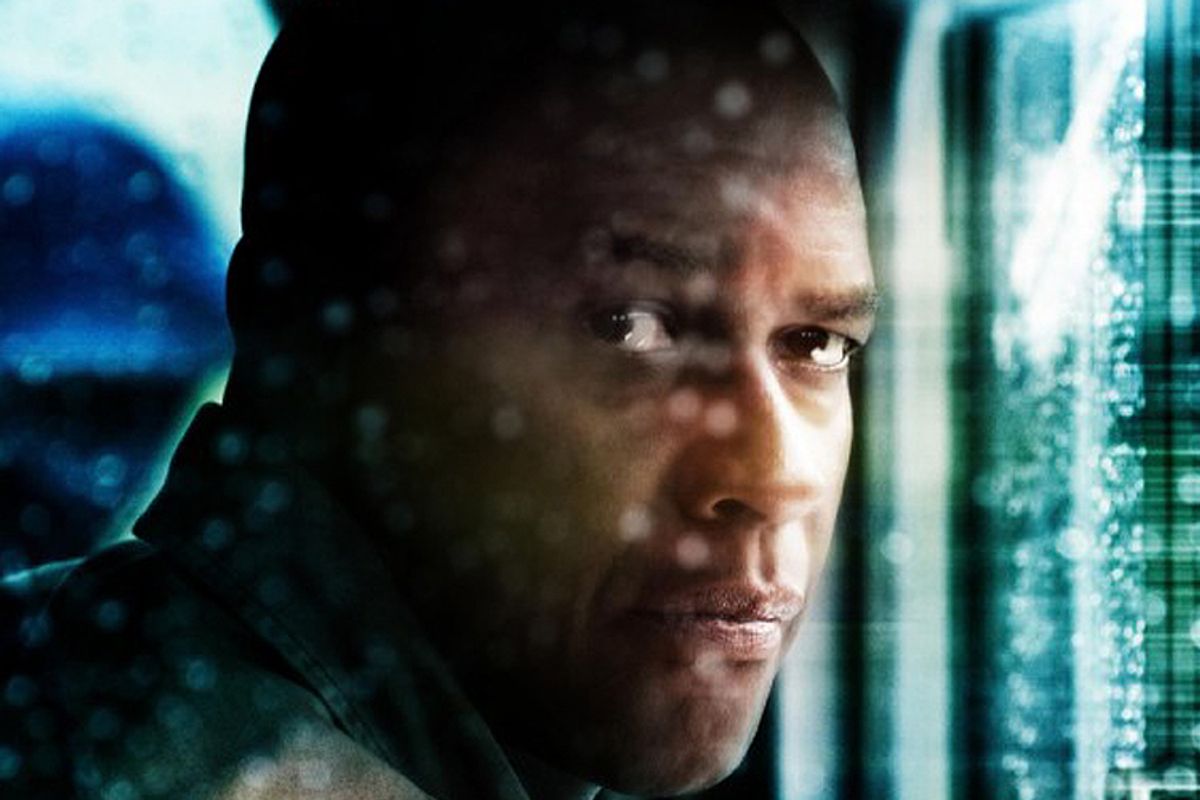 If a movie can be both exciting and boring at the same time, that movie would be "Unstoppable," an adrenaline-infused runaway-train flick that perfectly distills director Tony Scott's talents and limitations. It's got all the ADHD camerawork, aerial photography, compulsive jump cuts and smeary, digitally enhanced colors that Scott relies on to make his Hollywood hackwork seem fresh and contemporary. It pays only the most cursory attention to old-fashioned stuff like plot and characters, and who needs those when you've got "a missile the size of the Chrysler Building," as someone helpfully explains, threatening to wipe out an entire Pennsylvania city?

If you want to argue that "Unstoppable" is about anything beyond provoking a Pavlovian drug-addict response from the audience, then it's about men and their machines, both portrayed at least as lovingly as in those Soviet boy-meets-locomotive movies that Scott probably saw in film school in London, 130 years ago. Like so many American movies these days, "Unstoppable" is a semi-conscious nostalgic fantasy, set in an imaginary version of Middle America where the Industrial Age never ended and the immigrants (or at least the non-white ones) never showed up. The fictional Pennsylvania towns endangered by the runaway train loaded with toxic chemicals appear to be entirely Caucasian, except of course for Frank, the grumpy-charismatic train engineer played by Denzel Washington, who has a pair of hawt teenage daughters working their shift at Hooters on the day he faces death. (It wouldn't be a Tony Scott film without lecherous background details.)

Now, in case you're wondering, you didn't imagine it: Scott and Washington really did just make a train movie, and here they are with another one. Let's enumerate the important differences. "The Taking of Pelham 1 2 3" invoked clichés about ungovernable and corrupt big-city America, while "Unstoppable" invokes clichés about rock-solid, if dumbass, rural America. The train in Exhibit A was mostly stationary, while the train in Exhibit B is hauling ass, along with several carloads of an unstable and dangerous compound called molten phenol. The wearing-headphones-and-explaining-everything role, which belonged to Washington in "Pelham," goes to the ever-appealing Rosario Dawson here. (OK, she's the other nonwhite person in Pennsylvania.) The suit-wearing overlord who wants to cover the whole thing up, James Gandolfini in "Pelham," is Kevin Dunn in the new movie, while Kevin Corrigan plays the officious, semi-helpful expert role, inhabited last year by John Turturro.

In "Pelham," Washington played a courtly, sarcastic, vaguely troubled family man, while here he -- oh, forget it. One could complain, I guess, about the fact that an actor of Washington's range and presence plays the same guy in film after film, and seems supremely comfortable in the craptastic action cinema of Tony Scott. (This is at least their fifth movie together.) But you know what? Denzel is a movie star, and he's probably getting good career advice: Give the public the crusty, crafty, upstanding character it expects. There's no need to rehearse, and the checks have a lot of zeroes on them.

If Frank seems to embody the crisis of masculinity in one guy -- he's a mediocre single dad, being shoved into involuntary retirement -- he's got help. Washington's sidekick here is Chris Pine, who played Captain Kirk in the recent "Star Trek" reboot and seems like this year's contender for neo-Russell Crowe stardom. Pine plays Will, a trainee conductor with a restraining order hanging over him who makes an absent-minded mistake, one that could send his and Frank's train into a head-on collision with Train 777, which is coming straight at them at full speed with nobody on board. Will and Frank had nothing to do with that in the first place; 777 escaped because of a fat guy in the train yard. (You can't say that Scott doesn't understand visual language at its most primitive level, and here's one of its rules: Fat people are funny.)

After surviving that encounter, Frank and Will decide to defy their spineless bosses and take down 777 on their own, before it can get to the Big City and blow up a lot of blond moppets at the breakfast table. I'm not supposed to tell you how that turns out, but you only get one guess. (Mark Bomback's screenplay is nominally based on a real 2001 incident in Ohio.) Given that nearly the entire movie consists of high-speed stunt work, guys barking clipped shop-talk into intercoms and phones and walkie-talkies, and photography of various decrepit and/or beautiful Midwestern and Appalachian locations -- much of it was indeed shot in central Pennsylvania, but West Virginia, Ohio and western New York are also in there -- "Unstoppable" is one of Scott's cleanest and most effective movies. It delivers exactly the guy-friendly thrill ride it promises, and offers a predictable and entirely fantastic catharsis for its working-class heroes.

I'd like it a lot better, in fact, if Scott could resist his recent tendency to make his movies into sophomoric college essays about the power of the media, man. At least "Unstoppable" doesn't rest on an entirely ludicrous premise the way "The Taking of Pelham 1 2 3" did, with its Wi-Fi-equipped New York subway tunnels. As if not content with cinematographer Ben Seresin's jittery, streaky, speed-up-then-slow-down images, Scott shows us much of the pursuit of Train 777 as it's being seen on TV. It's a bit too O.J. Simpson, and feels like the wrong answer to a question nobody asked, arriving half a beat late. Instead of asking us to sit still through an entire motion picture, albeit one of the most hyperactive ever made, Scott decides to make us feel just as nervous as if we actually were watching YouTube and the evening news and Colbert and John Boehner and Denzel Washington's foxy daughters, all at once.