Revealed: the surprisingly close link between the liberal billionaire and the Republican superstar 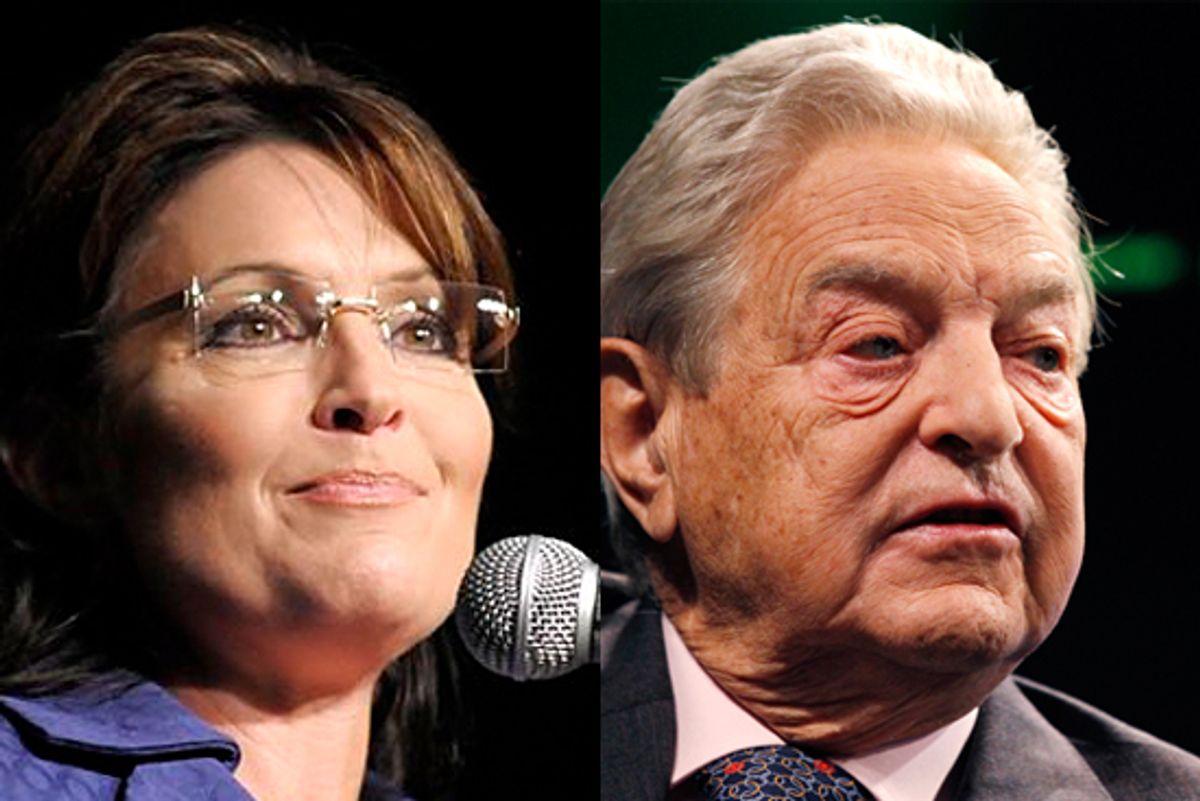 Glenn Beck spent the past week denouncing the liberal billionaire and philanthropist George Soros as a "puppet master" who is orchestrating a coup "to bring America to her knees."

Given Soros' alleged role plotting to destroy the United States, Beck and his Fox viewership might be surprised to learn that one of Sarah Palin's top aides has been on Soros' payroll for years.

That would be Republican lobbyist Randy Scheunemann, Palin's foreign policy adviser and a member of her small inner circle. He runs a Washington, D.C., consulting firm called Orion Strategies. Scheunemann and a partner have since 2003 been paid over $150,000 by one of Soros' organizations for lobbying work, according to federal disclosure forms reviewed by Salon. The lobbying, which has continued to the present, centers on legislation involving sanctions and democracy promotion in Burma.

In the course of Beck's three-day look at Soros' network of organizations and his links to Democratic politicians, the fact that a top aide to a likely GOP presidential candidate has been retained by a Soros outfit did not come up.

Scheunemann is known as a longtime neoconservative who pushed for the U.S. invasion of Iraq and for support for Georgia. He has been strongly identified with Palin since he met her while working as the chief foreign policy adviser of the McCain campaign in 2008 (see a classic picture of Scheunemann and Palin doing debate prep here). Since then, Scheunemann has taken on an increasingly prominent role in Palin-land. He traveled with her to Hong Kong for a speech in September 2009. In the second quarter of 2010, Scheunemann's Orion Strategies was paid $30,000 by Palin's political action committee for consulting on "national and international issues."

We reached out to Goldfarb Thursday afternoon to see if Orion had any comment about its work for Soros, and we will update this post if we hear back.

Here, finally, is one of the lobbying disclosure forms that shows Scheunemann's work for Open Society (the rest can be found by searching here):