The keys to crisp French fries at home

Everyone knows fries are hard to make and better in restaurants. Everyone is wrong 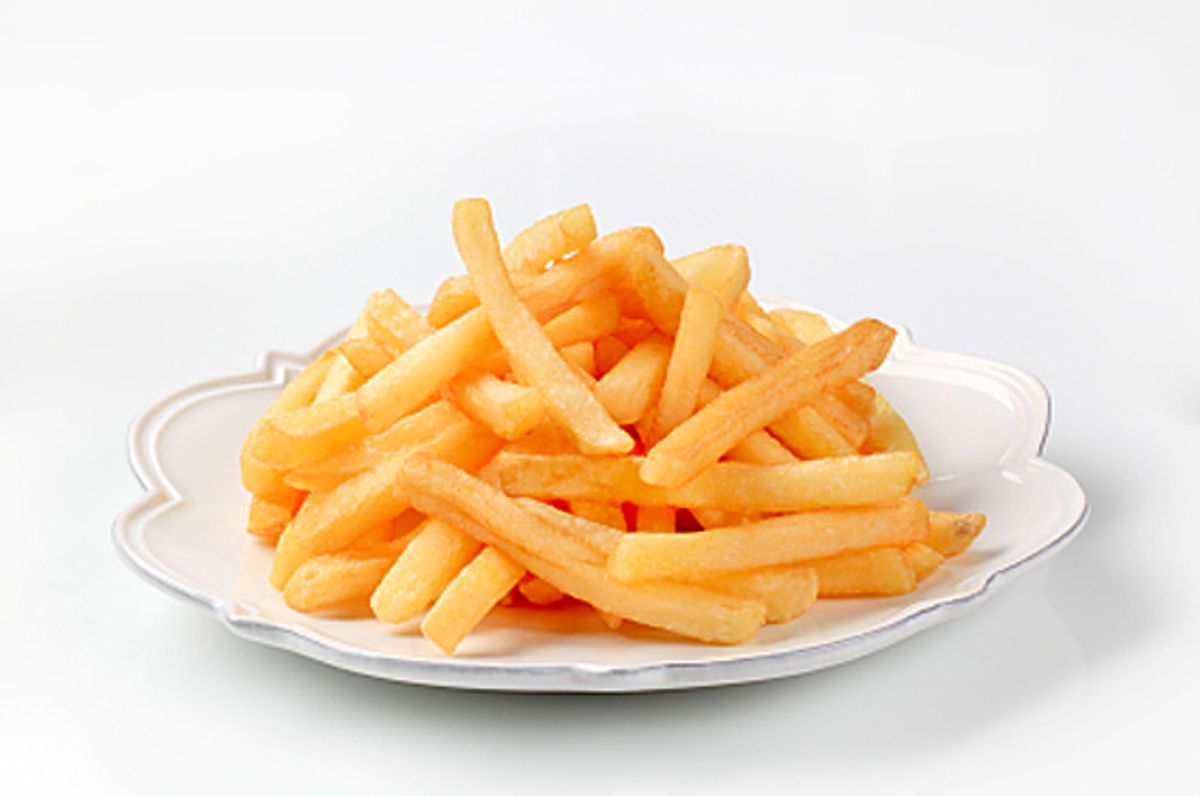 French fries -- like roast chicken, macarons and about half a dozen different ways to cook eggs -- fall into the category of foods I like to call, "Things anyone can make and a handful of borderline-crazy people will spend their lives trying to perfect." I'll have to work on a shorter version of that; it looks terrible in a spreadsheet.

Anyway, I am that borderline-crazy person when it comes to omelets and scrambled eggs, but with French fries, I take a saner, middle-ground approach. I use the old-school technique, one that is a tiny bit more work than just tossing potatoes into hot oil and a lot less work than the fabulous nutjobs who shoot their ducks to render fat for the grease and triple-cook the potatoes after freeze-drying them or whatever. And I'm perfectly happy -- thrilled, really -- with the results I get: hot, crisp and salty, giving away to tender, fluffy insides and a mild, earthy sweetness.

The key to this technique is frying the potatoes twice. The first is a dip into kinda-hot oil to cook them through, start to form a crust, and evaporate much of the water, because water is the enemy of crispness. Now ready, the potatoes take a second trip into hotter oil, and the fatty inferno crisps them up and turns them that color of brown that people like to liken to precious metals. Drain, a little salt, and, Boom! French fries!

Now, the obsessive -- because I understand him, because he is me -- can crow here about how these fries do not test the physical boundaries of how crisp fries can be, nor do they keep their texture in perpetuity. That's fine. But some of us have lives to get on with, and don't have an hour to make fries in cold oil, or, despite compelling arguments for it, a day to prep and freeze them in advance.

And besides, technique is just a part of it. The kind of oil and potato you use can produce wildly different results, which, I confess, I have not studied at length. I can tell you, though, that duck fat fries have long been the object of fetishists, and that beef fat fries were the tip of the spear in McDonald's global domination. I can also tell you that perhaps the greatest fries I've ever had in my entire life were at a restaurant in Chicago called The Publican, where the server told me, mysteriously, that the potatoes were tormented in a mix of "80 percent animal and 20 percent vegetable." I would have inquired further, but when someone says "80 percent animal and 20 percent vegetable," it just seems like going too far to ask for more clarity. But, all that said, I love my fries fried in regular-old peanut or corn oil. Or olive oil, if you're related to a Greek shipping magnate. I find canola oil to smell weirdly like fish at high temperatures, and I rarely find that appealing, but far be it from me to dissuade you from making your fries taste like low tide if that turns you on. To each their own grease!

As for the potatoes themselves, the orthodox choice is to use russets, or "Idahos." They're high in starch, which makes them fluffy; low in sugar, which has a tendency to burn; and low in moisture, which makes them crisp -- these are the choice for textbook fries. But that's not to say you can't make delicious fries with "all-purpose" or "chef" potatoes, medium-starch potatoes like Yukon Golds, or even waxy potatoes like new reds. As you move down the spectrum from starchy to waxy potatoes, you will lose crispness but gain in tenderness and sweetness. It's a matter of preference. (I would never make fries from waxy potatoes myself, but I know a chef who swears by their flavor, and while they only keep their crispness for a few minutes, they did keep very good company with my burger.) To each their own spud!

Serves, well, only you know how many fries you can eat. But this is good for 4-6 reasonably demure people

Special equipment: A big, deep pan, Dutch oven, or pot (a wok is great) for frying. A slotted spoon or long-handled strainer. A frying/candy thermometer is real handy, too, and you can find them in your supermarket for a couple of bucks.