This week in crazy: Glenn Beck 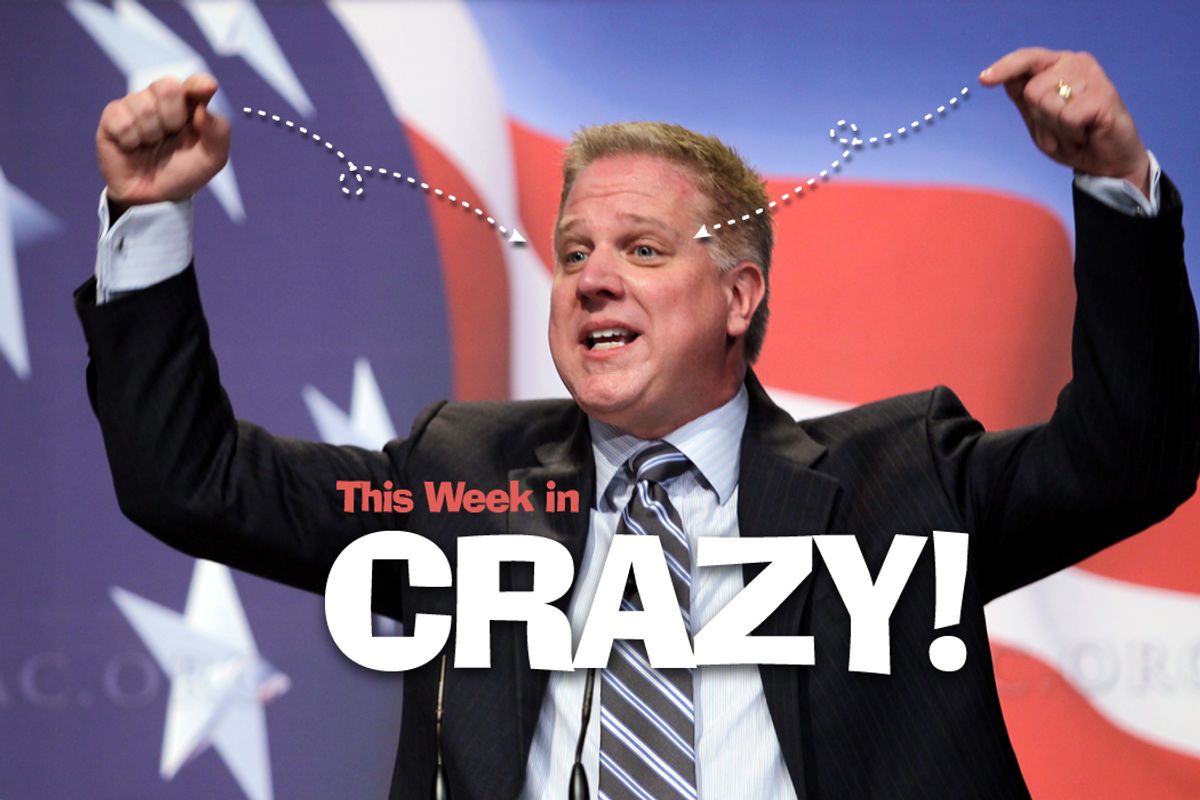 Shocking but true: Glenn Beck has not yet been the subject of "This Week in Crazy," the feature that was essentially created to honor 2009's Craziest Man. This week, though, as if he knew that his usual conspiracy-mongering, fake tears and suffocating paranoia just weren't cutting it anymore, Beck aired a series of shameless attacks on George Soros that seemed ripped from the pages of the Protocols of the Elders of Zion.

The message? Financier and philanthropist George Soros is a "puppet master" secretly at the center of a vast conspiracy that aims to destroy our economy and take over the nation through deceit. The proof? A lot of selectively edited quotes, wild innuendo and the fact that Soros "collapsed regimes" in "four other countries."

Beck knows full well that Soros dedicated his life to promoting democracy in Communist nations, which an avowed anti-socialist like Beck should theoretically be championing him for. But Soros is a progressive, and in the Beck world, progressives are socialists are Maoists are Communists are totalitarians, so any enemy of Soros is a friend of Glenn Beck's. Insanity makes strange bedfellows. Look who Beck quotes to support his argument that Soros is one of the secret rulers of the world:

He's known as the man who broke the bank of England. The Prime Minister of Malaysia called Soros an unscrupulous profiteer. In Thailand, he was branded the "economic war criminal." They also said that he "sucks the blood from people."

The prime minister of Malaysia went on to say: "We do not want to say that this is a plot by the Jews, but in reality it is a Jew who triggered the currency plunge, and coincidentally Soros is a Jew." (The other quote, about how Soros is a bloodsucking something-or-other, speaks for itself.)

I don't think people who read secondhand accounts of the specials -- or even those who read the transcripts -- can grasp how weird and shameless the entire spectacle was. There were puppets strewn about the set. The camera always watches Beck watching whatever we're supposed to be watching. Beck blatantly flirted with classic anti-Semitic tropes, knowing he'd be called on it but confident his friends would have his back. His taunting response to criticism: If he's a lying anti-Semite, why would Rupert Murdoch allow him on the air?

But the craziest bit of the entire thing came when Glenn Beck accused Soros -- a 14-year-old Jew in Budapest attempting, during the war, to survive the Holocaust -- of collaborating with the Nazis and "helping send the Jews to the death camps." Yes, that happened. Repeatedly.

Even Beck's allies in the Anti-Defamation League seemed taken aback by this -- though they affirmed that they still supported Beck the following day.

The fact that, for reasons of partisan convenience, half the media and the Anti-Defamation League ignore or pretend to not see fairly blatant repurposing of ancient anti-Semitic propaganda on a major cable news network by a prominent pundit? That makes me feel like this week's craziest person.