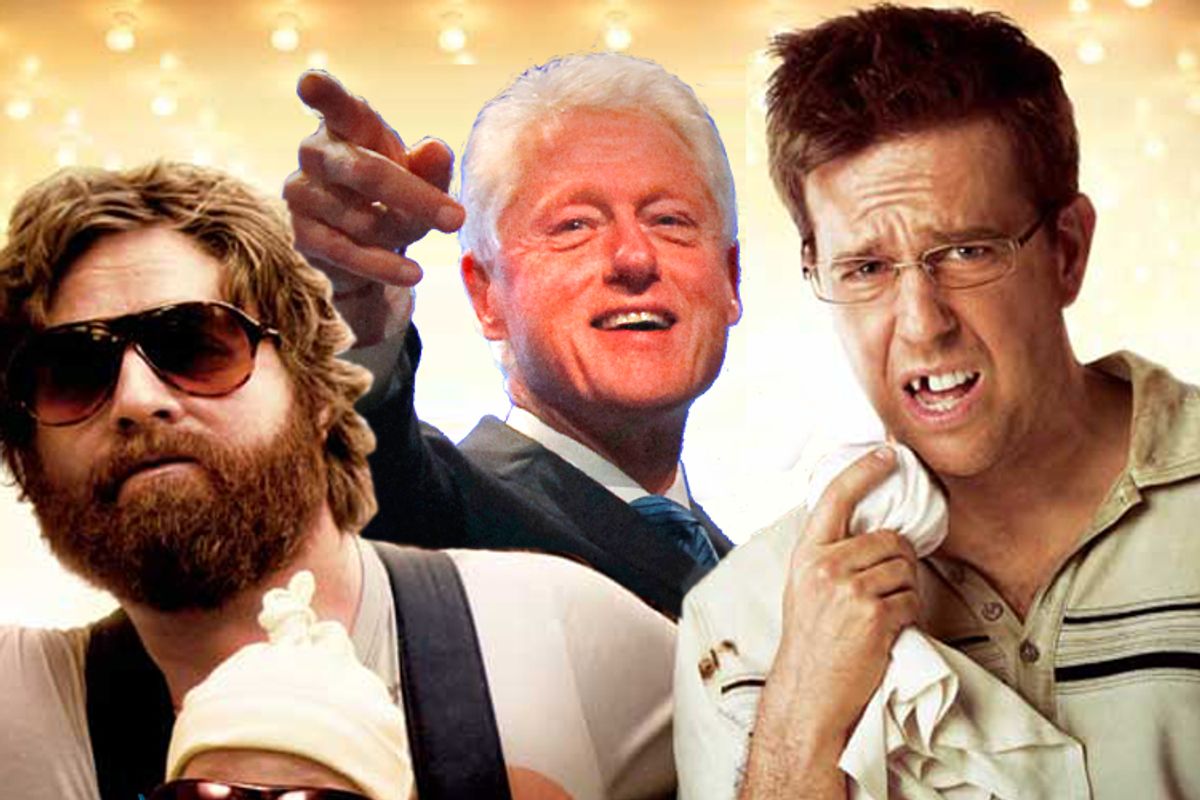 Bill Clinton's office won't say whether he did, as rumor has it, film a cameo for the upcoming sequel to "The Hangover" while in Thailand over the weekend. In a way, the chatter makes perfect sense, since Clinton is such a naturally gifted performer. And he demonstrated some decent acting chops in a memorable video that was prepared for the last White House Correspondents Dinner of his presidency (the setup:  A bored president is passing his final days in office by doing the laundry, manning the White House switchboard and making sandwiches for his wife).

If Clinton is, in fact, going Hollywood, he will only be the latest former president (or vice-president) to take a stab at show business. Some recent memorable examples:

Reagan did little actual play-by-play, sticking mostly to supplying background material given him in advance. But when Ozzie Smith began the game by hitting a foul into the stands, you could hear Reagan say, "Whoops," and then, "Somebody has a souvenir."

Later, when a man was thrown out at first, Reagan said, "Aw-oh!" Indicating that he was not the best-informed commentator as he was not the best-informed president, Reagan confessed he didn't know if Julio Franco's first name was pronounced "Hoolio or "Joolio." But he corrected Scully when Scully misidentified another player as Franco. "Oh, I thought it was Tony Gwynn," Reagan said. And so it was.

Scully was adept at bringing Reagan into the game. Noting that one player used videotape to study technique, Scully asked if Reagan had ever used it. "No, I'm afraid I was a little before that," Reagan said. "Of course, in the picture business, we have a thing something like that, and that is, all through a picture you're making, you go into a projection room and see what you did the day before."

"I went to see a few women, all of them very special," [Brooks] said. "Doris Day I spoke to, but she did not want to come out of retirement. Esther Williams I spoke to. And quite by accident, I actually mentioned as a joke one day to my agent, 'I wonder if Nancy Reagan wants to act.' And my agent's sister is her best friend."

Two hours later, Brooks said he got a call: "She wants to read the script."

"I went to her house, and we worked on some scenes together. But waaaay before I would ever have to make a decision on that . . . she said this is not the time. She said, 'I won't be able to do this, but God, am I gonna hate whoever you get to do this.'