The Mama Grizzly's new TLC reality show claims to be neutral. But its real purpose is political -- and dangerous 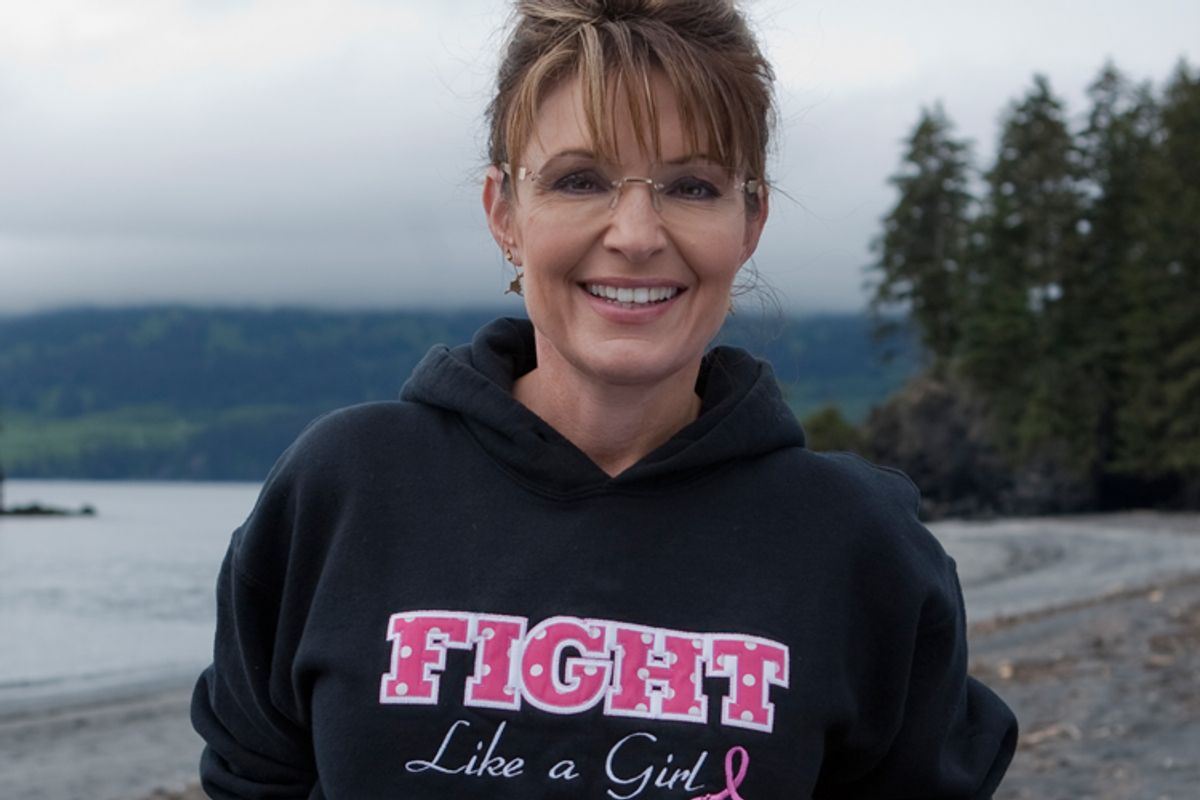 "Sarah Palin's Alaska" has no table-tipping divas and no Hawaiian bounty hunters. It has no bouffant sporting Snookis (though it does showcase some similar hairstyles). It is in many ways a tamer, less Ed Hardy festooned "Jon & Kate Plus 8." Yet whether you prefer your rallies to be of the honor, sanity or fear-restoring variety, there's something to disgust and delight everyone in TLC's new Palinpalooza.

For the devout, the eight-hour campaign ad thinly disguised as a travelogue will do absolutely zip to dispel any comfortingly clung-to notions of Palin as the straight-shooting regular gal who can smoothly move from baking cupcakes with her family to talking taxes on "The O'Reilly Factor." TLC, meanwhile, is hilariously promoting the Mark Burnett produced show as "not taking sides" with a blog that insists, "The show has nothing at all to do with the 2012 Presidential campaign." That's like saying "The Biggest Loser" isn't about fat people.

I guess when Palin says in the teaser trailer for the show that "I'd rather be doing this than in some stuffy old political office; I'd rather be out here being free," that wasn't some shameless "unless you really, really want me" ploy. And when in the first episode, she just happens to observe, "I love watchin' these mama bears; they've got a nature humankind could learn from," that has nothing at all to do with her own political action committee ad of earlier this year entitled -- what was it again? -- Mama Grizzlies. Sure, TLC, I believe you. Because I'm just that stupid. Likewise, when the Palin family triumphant built a fence to protect themselves from a journalist who's "writing an ugly book" next door, it wasn't just an issue of privacy; it was, as Sarah declared, "a good example of what we need to do to secure our border." Palin 2012 -- Keeping America safe from Joe McGinniss.

Palin, in fact, is shutting down access and asking for papers with the zeal of an Arizona border patrol agent in the show's first episode. When daughter Willow bounds up to her bedroom while entertaining a gentleman friend, Palin stops him in his tracks and points to the baby gate at the foot of the stairs. "See this gate?" she asks. "It's for nooooo boys." Moments later, he breaches it anyway, and Palin promptly deports him back to the living room couch. Go drop your anchor baby someplace else, buddy.

But it's not all remedial metaphors and Palin as a glowingly-presented working mom. Even if you're not on Team Pit Bull/Grizzly Bear/Other Throat Ripping Spirit Animal, you might enjoy the show anyway, for its unquestionably breathtaking Alaskan scenery, its occasionally rogue-going younger Palins (9-year-old Piper's critique of her mother's Blackberry addiction is pretty swell) and for its near-constant willingness to put Palin in the line of danger.

In the space of the series' first hour, Palin sits nervously near a family of bears hunting for dinner, takes a bumpy ride in bad weather in a bush plane, lands on a glacier, sidesteps crevasses and clings perilously to Ruth Glacier as she climbs it one slippery step at a time. Previews for the rest of the series show her dog sledding, rafting, kayaking and shooting rifles -- and naturally repeating her mantra, "Don't retreat, just reload." And with seven episodes to go, it's just a matter of time before somebody's tying her to the train tracks. I guess in lieu of installing a hot tub, the producers had to do something to jazz up the works. But if you'd rather skip the former governor's whole transparent ploy for America's eyeballs, here's a spoiler alert -- no actual Palins were harmed in the making of this show.

With its clichéd, tell-us-how-to-feel soundtrack (Kids = cute tinkly music; bears = dun dun DUN) and its obviously heavily orchestrated whipping up of adventure, "Sarah Palin's Alaska" sometimes resembles a run-of-the-mill, less dysfunctional than average reality show. And then you remember, this isn't about a self-described "normal, average, everyday American." This isn't even Blagojevich on "Celebrity Apprentice." This is a series about a person currently, actively campaigning for the Tea Party's "common-sense conservative principles" as "the future of politics" who gets to have eight hours of prime-time television handed to her.

It may not be as intense as "Big Brother," but I'll say this about "Sarah Palin's Alaska." The fact that TLC continues to straight-facedly assert that "Sarah Palin will make remarks that will be explicitly and implicitly political" but that the series itself is still "whatever viewers want it to be" isn't just a steaming pile of grizzly manure: It trumps "Bridalplasty" as the hands down most dangerous reality show ever conceived.