Four Loko and the history of banned drinks

As New York outlaws the caffeinated alcohol, we talk to an expert about what happens when booze becomes illicit 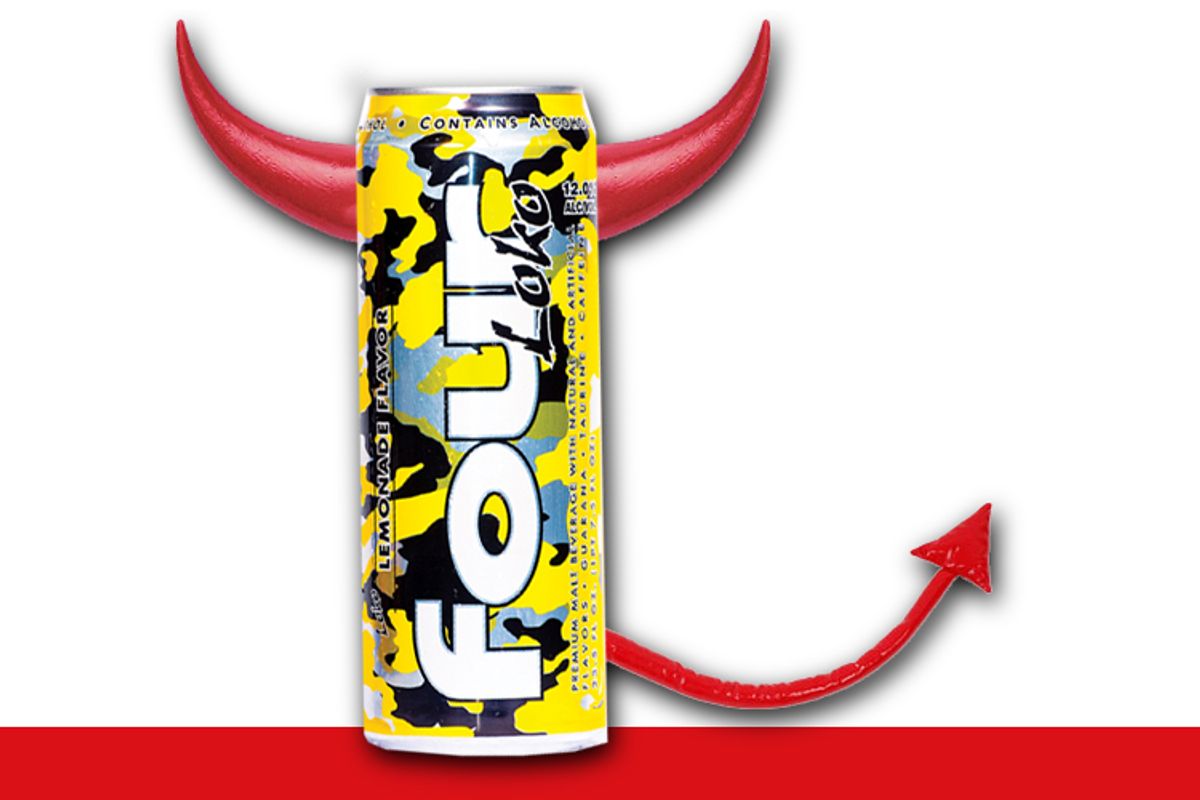 Four Loko -- the latest wildly popular, wildly caffeinated, wildly alcoholic beverage to take hold with recreational drinkers -- is not long for the Big Apple. On Sunday, Gov. Paterson announced New York would join a growing number of states, including Michigan, Washington, Utah and Oklahoma, that have banned the sweet, fruity concoction, nicknamed "blackout in a can" and " liquid crack." In addition to being super-potent (one 23.5-ounce can has as much alcohol as three beers and one to two servings of coffee), Four Loko has also been linked to several alcohol-related deaths and sicknesses (including the June beating of gay teenager in the Bronx) -- so many, in fact, that the FDA is now reconsidering its approval of the product.

The beverage is just the latest in a rash of "demon drinks" to incite public outrage. It was only last year that another alcoholic energy beverage, Sparks, removed the caffeine amid public pressure. Everclear, a grain alcohol that boasts 95 percent alcohol, is banned in several states. Even Cristal, the signature hip-hop drink, was branded racist by Jay-Z in 2006, prompting a boycott of the brand. And, of course, there is the much-mythologized absinthe.

So where does the Four Loko ban figure in the history of taboo spirits? To get some historical perspective, we turned to Dan Okrent, the former public editor of the New York Times and an expert on the biggest ban in alcohol history: Prohibition. Okrent's book. "The Last Call: The Rise and Fall of Prohibition" is the definitive history of the period. Salon spoke with him over the phone about how moral outrage over alcohol is different today than 80 years ago, and whether the banning of a drink can actually make it more popular.

What other drinks have met with this type of controversy?

Absinthe was outlawed because it was 150-proof. And at the time there were the same sort of arguments: that it was causing brain damage and hallucinations, and it was doing terrible things to people. That was the argument. Whether or not it's true, I don't know.

Let's talk about the historical anxiety about certain drinks. What are some of the more ridiculous drinking bans?

Well, you can't get much more ridiculous than a 14-year constitutional amendment! Although it's interesting to note that it was not against the law to drink. It was against the law to sell, transport and manufacture alcohol. The specific bans that popped up in various states before that, in every instance, were honored more in the breach than in the reality. The state could ban the consumption of alcoholic beverages and people would find alcoholic beverages. Go to any college campus today where the drinking age is 21, and people find a way around the ban.

How does banning a drink, historically, play into its popularity?

Well, if is banned, how are people getting it? This is different from the total ban of alcohol, which immediately began a huge billion-dollar bootleg market. But I can't see that happening with an individual brand, because there are plenty of other drinks to get. It's hard to imagine people smuggling Four Loko and selling it after hours in speak-easies. People will drink something else. In states where it's not banned, I could see how you could begin a marketing push: "Banned in New York! You can only get it here!" But within New York, who's going to go through the bother?

A major sticking point for people who want the Four Loko ban is the combination of alcohol and caffeine. But that combo isn't new. They've both been around for a long time, and people have been mixing them for a long time: Irish coffees, rum and cokes, Red Bull and vodka. Why the backlash now?

The logic of that would seem to be that you can't stop people from mixing the two on their own, taking a coffee and pouring some Bailey's or Kaluha into it. You can't stop people from making explosives out of nitrogen fertilizer either. But you can outlaw the sale of explosives. Food and drug laws are there to protect people that don't know what's in the things they are buying. Whether it's the nutrition information that's put out on every food product sold in the U.S., or the smoking warnings on cigarettes, there's this assumption that the government can play a role in  determining what we know about what we consume.

The push to ban Four Loko is coming from concerns over whether it is actually safe, as well as a sense that, with its sweet taste and bright packaging, it might be a little too appealing to underage drinkers. The New York SLA did a sting operation sending underage secret shoppers into bodegas to buy it, and the success of that played a large role in the ban. How does this sort of furor compare to the moral fury that caused Prohibition?

Men in the 19th century in both cities and the countryside were drinking huge quantities, and mistreating their families, and spending the mortgage money, and bringing home venereal diseases. It was a huge social problem. In 1830, Americans drank three times as much as they do today. And at the time women had no political or civil rights, really. A lot of other factors influenced it by 1910, but it was rooted in alcohol abuse. Genuine alcohol abuse. We drink about a third of what we drank then. There are a lot of reasons why people drank more then. One, the quality of water was so lousy, so it was almost a safer way to hydrate yourself. But in the words of one historian, Americans drank from the crack of dawn to the crack of dawn. It was a drunken society. Even industrial production was down lower. Factories couldn't hope for a full staff on Monday, because Sunday was the day that people got smashed, workers would stop midmorning and mid-afternoon for a coffee break that was called "grog time" but it was booze. It's hard to imagine today how much people drank then. So the moral furor that came out of it was out of this wish to protect people. The term used by the women who started that side of the movement was "home protection." The men were drinking so much, and the families were suffering terribly because of it.

There are some rumblings that the various alcohol lobbies are behind the Four Loko ban, because it's eating up a big market share. Do you think that could be the case? Is there any historical precedent for the industry blocking a specific product?

In the years before Prohibition, the beer lobby and liquor lobby hated each other. The beer people wanted to outlaw liquor. They said beer was liquid bread. It was nourishing. And those evil liquor people were trying to kill you. And the liquor people said, "Well, if you're going to screw with us, then we're not going to support anything you want to do." So never refer to the beer and liquor lobby, because they really don't like each other. That's a good example.