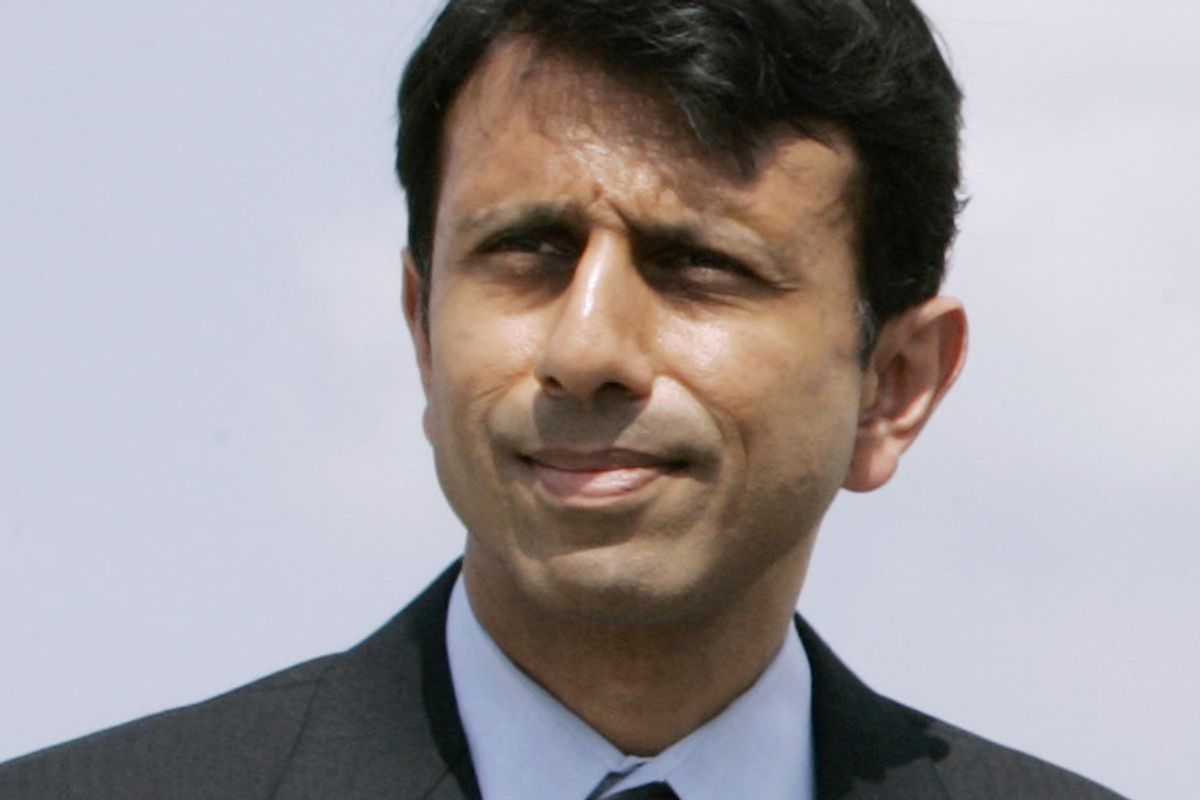 The evidence is growing that Gov. Bobby Jindal embellished a story of heroism in the face of bureaucracy during Hurricane Katrina to put himself in the middle of the action.

In his new book, "Leadership and Crisis," Jindal repeats a favorite story that first drew scrutiny when he told it last year. And subtle but telling shifts in the way Jindal recounts the story suggest that the original version was less than accurate.

This gets a bit complicated, so bear with us. The story of the story begins in February 2009, when Jindal was selected for the plum assignment of giving the Republican response to President Obama's first State of the Union address. A central anecdote in that speech involved Jindal, at the height of Katrina in 2005, supposedly helping the sheriff of Jefferson Parish in suburban New Orleans to beat back an unnamed bureaucrat who was trying to block boats from rescuing stranded citizens because the boats lacked proof of registration. Here is the video of that bit of the speech, with transcript below:

During Katrina, I visited Sheriff Harry Lee, a Democrat and a good friend of mine. When I walked into his makeshift office I'd never seen him so angry. He was yelling into the phone: 'Well, I'm the Sheriff and if you don't like it you can come and arrest me!' I asked him: 'Sheriff, what's got you so mad?' He told me that he had put out a call for volunteers to come with their boats to rescue people who were trapped on their rooftops by the floodwaters. The boats were all lined up ready to go - when some bureaucrat showed up and told them they couldn't go out on the water unless they had proof of insurance and registration. I told him, 'Sheriff, that's ridiculous.' And before I knew it, he was yelling into the phone: 'Congressman Jindal is here, and he says you can come and arrest him too!' Harry just told the boaters to ignore the bureaucrats and start rescuing people.

After Jindal's SOTU response, the account drew scrutiny from Talking Points Memo and others because of several possible discrepancies, including the fact that Lee had given an interview to CNN saying that he found out about the boat registration issue seven days after the storm -- not during the actual rescue effort. (Lee, by the way, died in 2007.)

In response, Jindal's office sent several statements to Politico that appeared to concede that key implications of the story -- that Jindal had intervened during the heat of a rescue effort, and that Lee had acted to tell the boats to go out only after Jindal had offered support -- were false. But things were still ambiguous.

So it was with interest that we picked up a copy of Jindal's new book, "Leadership and Crisis," which offers his views on both Katrina (which took place when Jindal, who was elected governor in 2007, was still a congressman) and the BP oil disaster. Sure enough, Jindal recounts in the book the same story about Lee -- but this time, he tells it in a subtly different way that suggests that Jindal was hardly at the center of the action, and perhaps even that the episode occurred well after the actual boat rescue effort. Here's how Jindal recounts the story in his book:

When I was with Harry after the storm, I had never seen him so angry. He was in a makeshift office cussing somebody out on the phone. "Well, I'm the sheriff," he barked, "and if you don't like it you can come and arrest me!" He explained the problem to me: he had asked for volunteers to show up with their boats to help rescue people out of the water. Scores of people offered to help, but then some bureaucrat announced no one could go out on the water without proof of insurance and registration for their boat. People were clinging to their rooftops for their lives, and some government hack was worried about rescuers not having the proper papers! So Harry told the volunteers to ignore the bureaucrat and use an exit ramp off the interstate to launch their boats.

After I agreed with his approach, Harry got back on the phone and said, "This is Sheriff Harry Lee. You can come arrest me, and Congressman Jindal's here -- you can come and arrest him, too."

So what's different here? In a word, the timeline. First, note that the 2009 speech began with the phrase "During Katrina." The book version begins with "after the storm." That's not dispositive, but the basic timeline is clearly different. In the book version, the story goes like this:

So the suggestion is that Lee is arguing with the unnamed person on the phone about whether his decision -- in the past -- had been the correct one. And, he's saying, Jindal agrees with me that I made the right call.

As it turns out, that's basically the same version of events that Jindal's chief of staff provided Politico after questions were raised about the 2009 speech. "Bobby and I walked into Harry Lee’s office -- he’s yelling on the phone about a decision he's already made," chief of staff Timmy Teepell told Politico. "He's saying, 'This is a decision I made, and if you don't like it you can come and arrest me.'"

But go back and watch the video of what Jindal said in his 2009 speech; his version then went like this:

So, to review: In the 2009 version, Jindal was actually present during the crisis, and he played a role ensuring that rescue went forward.

But the book version of the story suggests that Jindal was present only when Lee was arguing about the decision sometime later. And he played no substantive role in contributing to the call to dispatch the boats.