Mel Gibson slapped his girlfriend. Is it abuse? 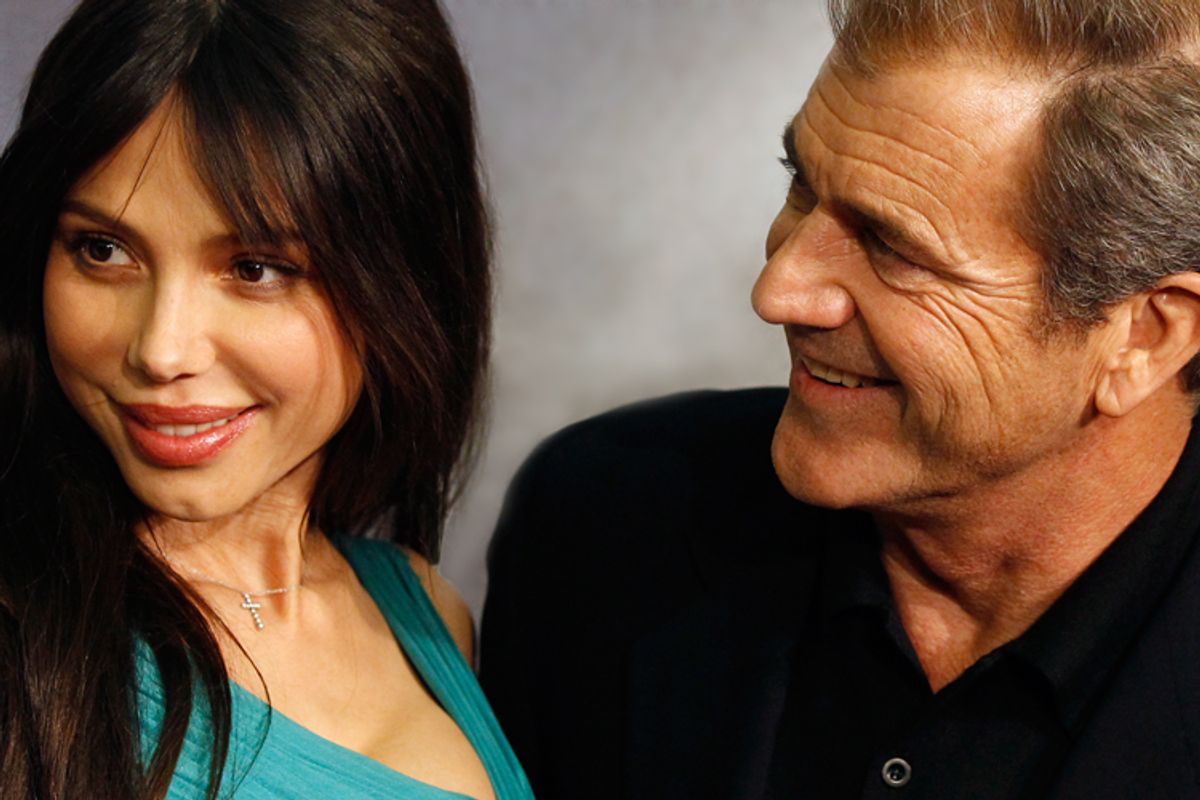 Actor Mel Gibson (R) and Oksana Grigorieva pose during the Spanish premiere of the film "Edge of Darkness" on February 1, 2010.
--

Mel Gibson would have it known he did not hit his girlfriend. He did not punch her while she was holding their baby daughter Lucia. He slapped her, OK? In court papers obtained Monday by TMZ, the 54-year-old actor, and occasionally erratic driver, details a heated January argument with his estranged girlfriend Oksana Grigorieva -- and unsurprisingly, it differs significantly from Grigorieva's version of events. But the guy Jodie Foster describes as "truly the most loved man in the film business" does cop to slapping Grigorieva "one time with an open hand in an attempt to bring her back to reality" during a fight while their 2-month-old daughter was in her arms. Grigorieva has alleged that Gibson broke her teeth, after photos of her with a chipped set of front choppers emerged. In his statement, Gibson claims "There was never any blood on Oksana and none of her teeth were 'broken,' although one of the false veneers from a tooth apparently did come off."

There are plenty of conflicting versions of events in Gibson's nightmarish breakup saga. There are the he said/she said reports of violence. In his statement, Gibson claims that it was precisely because Grigorieva was holding their child that he slapped her, alleging that she was "so rough and erratic with her movements I feared for Lucia's safety." There are, of course, the spectacularly racist, sexist, physically threatening telephone conversations, purportedly with Gibson. At one point Grigorieva says, "You were hitting a woman with a child in her hands. … Breaking her teeth, twice, in the face, what kind of man is that?" and gets the reply, "You fucking deserved it." There are the differing accounts of how Grigorieva got the cuts and bruises she was publicly sporting on her face after their blowout. Gibson claims they were the result of her "impulse control disorder characterized by the repeated urge to pull out one's own hair." He says that "during our relationship Oksana often had scratches and bald spots on the side of her head as a result of this disorder."

Grigorieva, whose penchant for going through lawyers like they're pretzels and lack of concern over whether doing tonight's "Larry King" might hurt her custody case, certainly doesn't come without her own set of questionable, self-preserving tactics. But here's what we do know for sure about Gibson: that the actor, who has a proven record of "belligerent conduct," admits he slapped his girlfriend hard enough to whack out her veneers. Just take that in for a moment. Suppose she was "hysterical." Suppose he was genuinely afraid for his baby. Suppose, as he says, he "did not hit her with a closed fist ... did not punch her in the face or in the temple." Was his action then justified, perhaps even necessary? Is there ever a moment where it's OK to hit your girlfriend? Sorry, I meant slap, because if your palm is open it's not assault, right? Oh wait, actually it is.

Nowhere in his statement does Gibson say that Grigorieva struck, or even attempted to strike, either him or their baby. He made that choice, and then, aw, shucks, said, "I do not believe I handled the situation as well as I should have." Whatever we choose to believe about any other elements of this tale, the fact now stands that the guy admits he smacked his girlfriend when she was not being physically theatening to him. And it's all too easy, when talking about abuse, to go down the road of justifying violence based on the likability or lack thereof of the victim, or to quibble over whether the abuser's fingers were curled or not. But you don't have to close your hand to be an abuser. And just because Mel Gibson doesn’t seem to know that doesn't mean the rest of us are similarly gullible.