Two presidents and their justifications 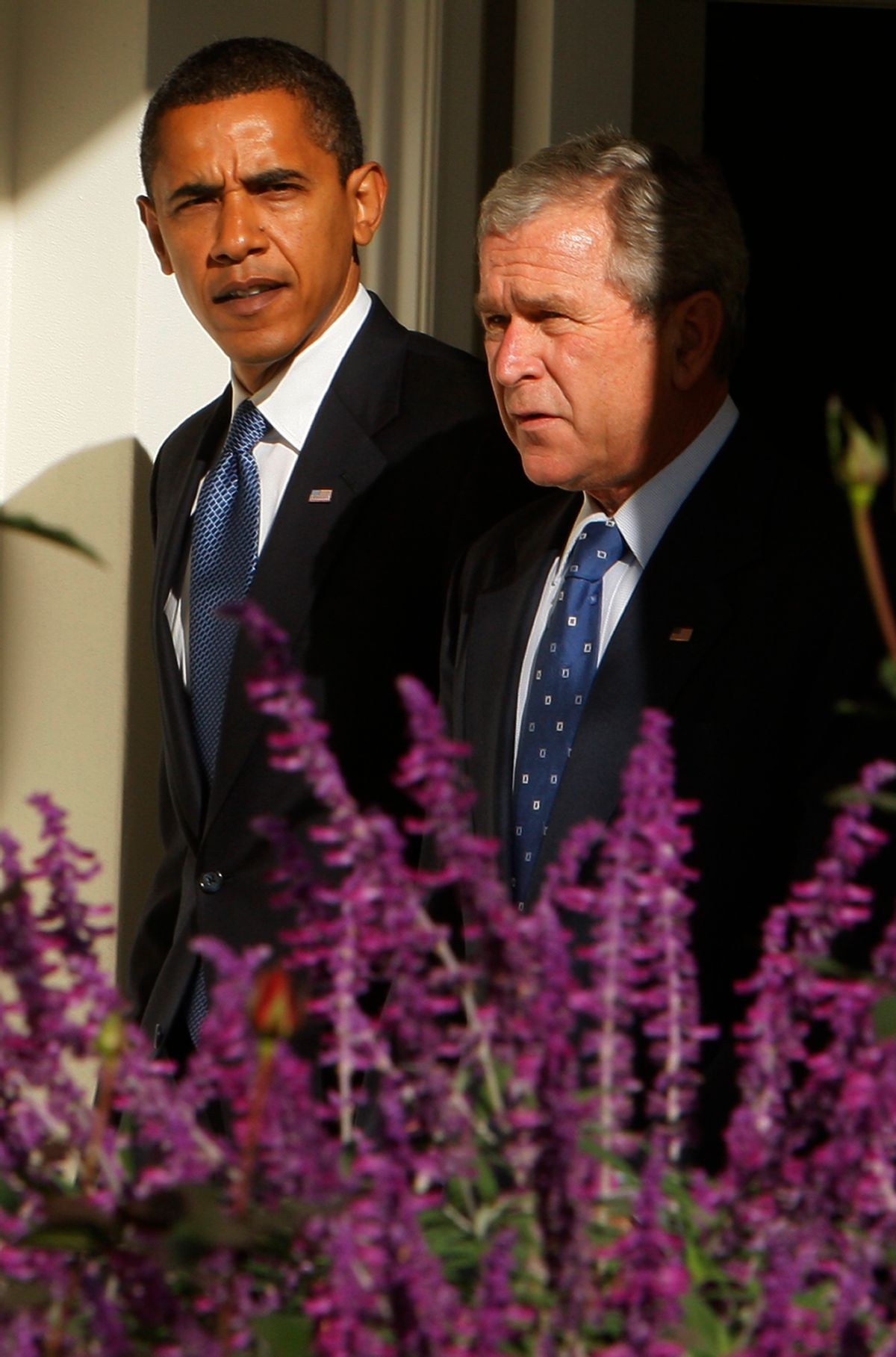 President Bush and President-elect Obama walk along the West Wing Colonnade of the White House in Washington, Monday, Nov. 10, 2008 prior to their meeting in the Oval Office. (AP Photo/Charles Dharapak) (Associated Press)
--

The real finalization process on my book leaves me very pressed for time today, but I wanted to note these two brief though highly illustrative items:

First, relating to the story I reported last week about the warrantless border seizure of the laptop and cellphone of a Bradley Manning supporter for the crime of visiting Manning in prison, The New York Times today editorializes in favor of greater restrictions on such searches and writes:

There is also a big difference between government agents scanning items for explosives or looking through a suitcase full of clothing, and searching through the hard drive of a laptop computer containing work papers, financial records, e-mail messages and Web site visits. . . .

The George W. Bush administration first authorized border agents to seize and view the contents of laptops, smartphones, and other devices and copy and share data with other government agencies without need for any individualized suspicion of wrongdoing.

The Obama administration has tweaked the policy, requiring approval from supervisors to hold a seized device for more than five days, for example. The fundamental flaw remains: it permits the government to engage in indiscriminate and invasive fishing expeditions.

I actually laughed audibly when I read that because, on reflection, it so perfectly expresses the Change -- sorry, "tweaking" -- that Barack Obama has brought to the nation in these areas:  we're going to keep in place and aggressively enforce George Bush's unfettered laptop seizure policy for Americans, but our Goodness is reflected by our new requirement that some low-level unaccountable "supervisor" somewhere give their approval if we want to keep the citizen's seized property for more than five days.  Well, just as long as some unseen "supervisor" agrees that my seized, searched and downloaded laptop can be permanently stolen by the Federal Government and all its data permanently stored and shared even in the absence of a whiff of suspicion that I've done anything wrong, then I'm satisfied.

The Editorial also notes that legislation has been introduced by the now-defeated Russ Feingold to (a) ban all border laptop searches and seizures except where there is reasonable suspicion of wrongdoing;  (b) require a probable cause warrant from a court in order for a laptop and other electronic devices to be seized and kept by the Government; and (c) limit the ability of Homeland Security to share the information it obtains.  That illustrates why, despite his flaws, Feingold's re-election was one of the very few this year about which I cared enough to advocate.  That bill has three remaining Senate co-sponsors, all Democrats (Akaka, Wyden, Cantwell), but if the Tea Party candidates were even minimally genuine about their professed belief in liberty and limited government, shouldn't they vocally support such limitations on the Federal Government's unfettered power to invade, seize and then forever keep your laptops, cellphones and other instruments of communication and thought?  Who can simultaneously support that power and claim with a straight face to be an advocate of individual liberty and limited government?

Second, The Washington Post Editorial Page today furrows its forehead, scratches its chin, and wonders -- as its headline puts it -- "Why George W. Bush can confess to approving torture," despite the fact that, as they note, "waterboarding . . . had been considered a crime by the U.S. government for at least 90 years."  They're referring to the 43rd President's new book where he proudly confesses to having ordered waterboarding, among other torture techniques ("Damn right," he eloquently writes using his best cowboy-tough-guy falsetto).  The Post comes up with this answer:

Yet Mr. Bush feels free to confess to authorizing its use against three al-Qaeda leaders. That's because senior lawyers in his administration - most of them political appointees - provided him with secret memos declaring waterboarding and other standard torture tactics legal.

Actually, the fact that he got his own lawyers to write permission slips for him to break the law and torture people is not why he feels free to run around confessing to these war crimes.  It's because our media and political class is filled with people like Washington Post Editorial Page Editor Fred Hiatt, who last year urged that there be no criminal investigations or prosecutions, and wrote:

On the one hand, this is a nation of laws. If torture violates U.S. law -- and it does -- and if Americans engaged in torture -- and they did -- that cannot be ignored, forgotten, swept away. When other nations violate human rights, the United States objects and insists on some accounting. It can't ask less of itself.

Yet this is also a nation where two political parties compete civilly and alternate power peacefully. Regimes do not seek vengeance, through the courts or otherwise, as they succeed each other. Were Obama to criminally investigate his predecessor for what George W. Bush believed to be decisions made in the national interest, it could trigger a debilitating, unending cycle. . . .

There is a better, though not perfect, solution, one that the administration reportedly considered, rejected and should consider again: a high-level, respected commission to examine the choices made in the wake of Sept. 11, 2001, and their consequences. . . .

[A] fair-minded commission -- co-chaired by, say, former Supreme Court justices Sandra Day O'Connor and David Souter -- could help the nation come to grips with its past and show the world that America is serious about doing so. It could help Americans understand how this country came to engage in what many regard as vile and un-American practices. It might help the country respond better the next time it is frightened.

The alternative, for Obama, is a series of debilitating revelations, prosecutions and arguments that could drip-drip-drip through the full length of his presidency.

An O'Connor-Souter Commission!  That'll teach people never to torture again.  Sure, Hiatt acknowledged with a yawn, we're "a nation of laws" and we can't simply "forget" when our most powerful political officials commit the most serious war crimes, etc. etc. etc..  But criminal investigations are so terribly messy, uncivil, uncouth, distracting and disruptive.  Prosecutions are for those dirty rabble on the street selling drugs to other adults whom I sometimes see from the window of my car, not for our upstanding, Serious political leaders.  When they commit grievous crimes, we should have an impotent Commission of other upstanding, Serious political leaders politely look at what happened, issue a pretty Report, and then call it a day.  That is why George W. Bush feels so free to run around beating his chest and boasting of his war crimes:  because Fred Hiatt and his media comrades, masquerading as watchdogs over the politically powerful, have deliberately created the climate where such crimes can not only be committed, but publicly confessed and heralded, with total impunity.

UPDATE:   Last week, John Tyner, a resident of Southern California, was subjected to a long series of harassing and vindictive actions by Homeland-Security/TSA functionaries after he refused to submit to the new body scanning and groping searches at the San Diego International Airport.  He was randomly selected for the new procedures, and after he refused on privacy grounds, he repeatedly offered instead to go through the metal detectors which were being used on the vast majority of passengers.  When told that he would not be permitted to fly unless he submitted to the new procedures, he agreed to leave the airport, but was then prevented from doing so and threatened with large fines and other punishments if he tried.  The same day, he chronicled this abuse in a long blog post -- with detailed narratives and videotapes -- which quickly went viral and was widely-circulated.   If you haven't already, I highly recommend reading it.  As Digby wrote about it:

Just read this story of Orwellian airport hell and then think about how many of our basic notions of freedom we've given up in the name of "Homeland Security" in the past few years. Then think about the fact that we are spending billions of dollars in this so-called era of austerity on bullshit like this, with layer upon layer of supervisors and officers and supervisory officers basically performing security theater for no good reason.

These routine insults, humiliations and suspensions of human dignity are training us to submit to the police state. I noticed this morning that in all the blathering about tax cuts and deficits, not one person brought up Homeland Security. That bloated budget is going to get bigger and bigger and bigger and if you build it they will use it. And the results of that are obvious.

Making this story so much worse:  as John Cole notes today, the TSA called a news conference to announce that it was formally investigating Tyner to determine whether to impose $11,000 in fines on him.  As Cole observes:  "Don’t submit to the police state, and we’ll come after you. This isn’t a punishment for Tyner, it is a message to everyone else."

This is the sort of outrage that really merits a national uprising in defense of this citizen.  I hope to have some details on that in a bit (I turned in a major chunk of my book today and am thus slightly liberated until tomorrow).  I wrote on Twitter two days ago in response to this story:  "What has most degraded the American citizenry is convincing them that no value competes with or should be weighed against *Security*."  And, of course, these measures rarely provide real security:  only security theater.

Many Americans, to their shame, are typically apathetic to such concerns because privacy and civil liberties infringements are -- at least it's perceived -- being directed only at foreigners and Muslims, not "real Americans."  But these patdowns and body invasions are implicating the masses, and, as Salon's Dan Gillmor persuasively argued yesterday, could therefore finally provoke Americans in large numbers to declare they've had enough with invasive surveillance, at least on this front.  The fact that they are now making an example of Tyner for speaking out and publicizing his incident may very well intensify that response; it certainly ought to.

UPDATE II:  Mother Jones' Nick Baumann interviews Jeffrey Goldberg on the subject of Obama's attempts to assassinate Anwar al-Awalki, and that produces some (pleasantly) surprising results.  And, credit where it's due, Goldberg's two posts on his experiences with the new TSA procedures -- here and here -- are really quite amusing.

Speaking of credit where it's due, ThinkProgress has been documenting the interesting and encouraging trend of at least a few newly elected Tea Party members of Congress insisting that cuts in defense spending are necessary as part of increased fiscal responsibility.  We'll see if they follow through with that.  Clearly, the neocon elements of the GOP are quite worried about this potential rift in the Right over America's imperialism.  It'd also be good (shockingly so) to see them follow through on their individual liberty and limited government rhetoric by opposing these excesses in "Homeland Security," the Surveillance State and the War on Terror.

UPDATE III:  Jane Hamsher compellingly makes the case:  "Investigate the TSA, not John Tyner," and includes a link to a petition calling for that investigation.  The more people who sign onto that, the better.  The link is at the bottom of her post, which should be read, or here.