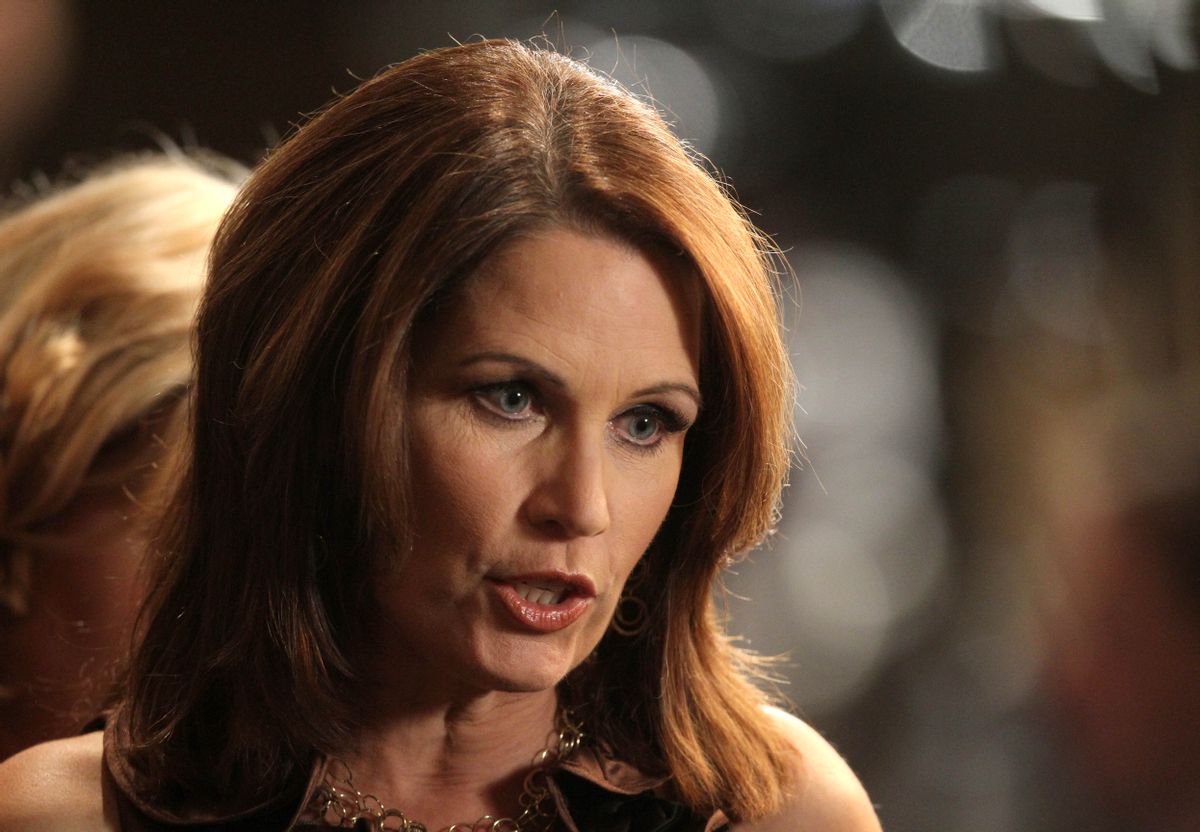 Boy, does this sound like fun. Michele Bachmann, veteran lawmaker of four years, wants to teach all the congressional newcomers the ropes. First up, per the Minnesota Independent, she'd like to hold regular Constitution classes for her proposed "Constitution caucus." And she'd better get moving! Because, as Michele explains in this clip: "Quite quickly -- within a matter of two months -- people can be co-opted into the Washington system." (But she's been there since 2007! What's her secret?)

Who would teach the classes? The only people she mentions by name are the most conservative members of the Supreme Court (and they're going to lecture freshmen Republican representatives on the Constitution once a week?) and David Barton.

Constitutional scholar Barton is an evangelical minister whose life's work is inventing an alternate pseudo-history of America in which that inconvenient separation of church and state is dispensed with. Back before the Anti-Defamation League regularly aligned itself with the religious right, it published a whole book trashing the religious right, and that book took Barton to task for giving his Constitution lessons "in the meeting halls of the racist and anti-Semitic extreme right."

The ADL also trashed Barton's "scholarship," saying, "in the manner of other recent phony revisionisms, the history it supports is little more than a compendium of anecdotes divorced from their original context, linked harum-scarum and laced with factual errors and distorted innuendo."

(Glenn Beck, tireless advocate of Israel and the Jewish people, has repeatedly praised Barton, of course.)

Here, again from the Minnesota Independent, is a sampling of Barton's brand of tea:

He has called holding Congressional sessions on Sunday unconstitutional and he has stated that United States borders were drawn by God.

"God's the one who drew up the lines for the nations, so to say open borders is to say, 'God, you goofed it all up and when you had borders, you shouldn’t have done it,'" he said recently on his radio program. "And so, from a Christian standpoint, you cannot do that. God's the one who establishes the boundaries of nations."

Bachmann and Barton go back years -- she's invited him to give guided tours of the Capitol and asked him to help shape Minnesota's education standards -- and while the conservative movement's warm embrace of resurgent neo-Bircherism is alarming I guess we should feel grateful that Bachmann's too busy hanging out with crackpots to actually do any of the hard work of legislating.