When it comes to civil rights history, Rush Limbaugh and fans suddenly like to hide behind ... liberal Republicans 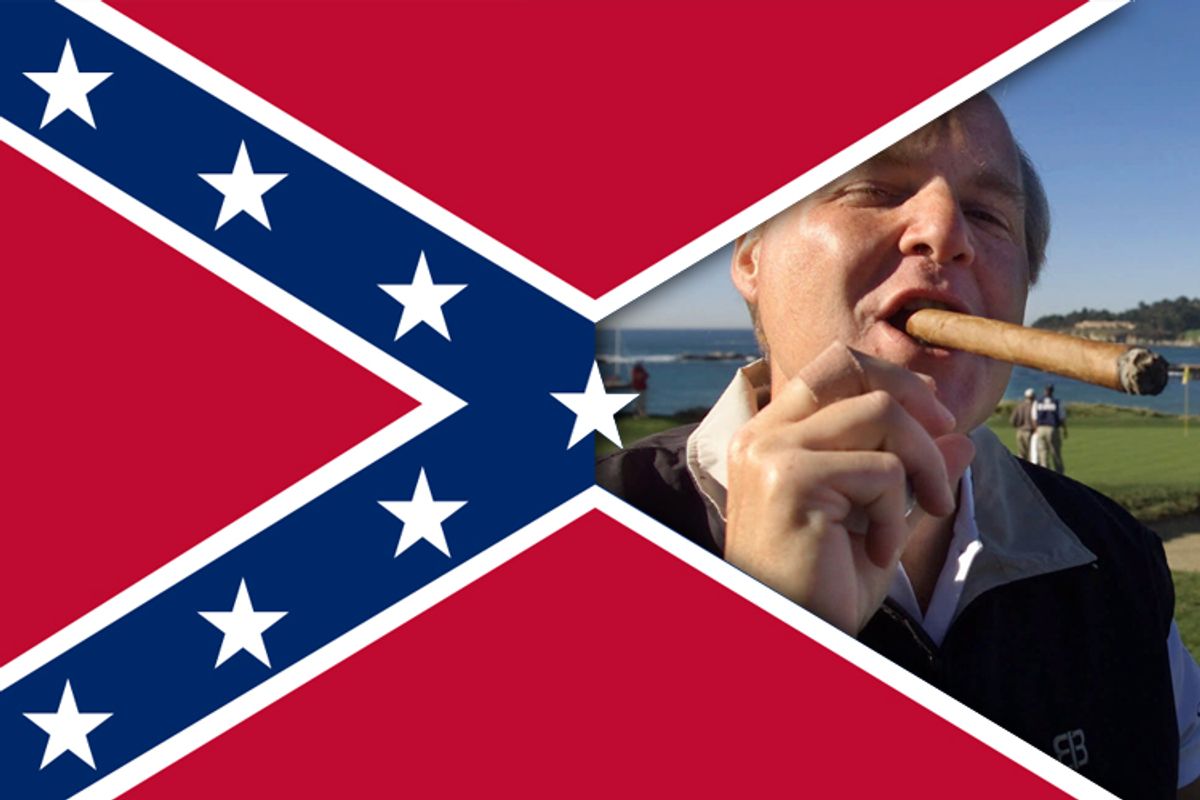 On Tuesday, I learned that there is a circumstance under which right-wingers are happy to align themselves with RINOs: in hindsight over the issue of civil rights.

I discovered this almost by accident, after including in a post about Rush Limbaugh's confused racial paranoia -- he can't seem to decide whether powerful white Democrats are conspiring to stifle the ambitions of their black counterparts or if they've been intimidated by political correctness into excessive deference -- a line in which I characterized the Republican Party as "an overwhelmingly white party that owes its strength to decades of growth in the South, a result of its 1964 decision to reject the Civil Rights Act."

It's not exactly a revolutionary claim, given the crucial role the South has played in the rise of modern conservatism and the degree to which the region has been remade as a Republican bastion -- a reality driven home by this month's midterms, which left the GOP, as the New York Times put it, "at a stronger position in the South than at any time since Reconstruction." The Civil Rights Act of 1964 is not the only reason for the GOP's evolving dominance in the South (nor is race in general), but it does mark a pivotal turning point in the relationship between the region and both political parties.

But, at least to judge from the e-mail I received on Tuesday, many conservatives aren't comfortable acknowledging this. By Tuesday afternoon, my in box was flooded with irate responses, virtually all of them making the exact same point: A greater percentage of Republicans than Democrats voted for the Civil Rights Act in Congress in 1964. Many of the e-mails included the exact partisan vote breakdown in both chambers. "Care to redo that rejection of the Civil Rights Act you discuss in the article?" one correspondent asked.

Through a quick Google search, I discovered that my piece had been linked at Lucianne.com, the right-wing news forum created a decade ago by Lucianne Goldberg (the same woman who infamously prodded Linda Tripp to rat out Monica Lewinsky to Kenneth Starr). The comments, just like the e-mails I was receiving, were filled with reminders of the partisan breakdown of the '64 vote. Who was this guy Kornacki claiming that the modern Republican Party had capitalized on the South's resistance to civil rights? "[T]the Democrats actually filibustered against the law," one typical comment read. "Simple fact is that the Republicans passed the Civil Rights Act. Only left wing biased historians keep lying about the facts."

A little more searching revealed that Limbaugh himself has been sounding the same theme. "All these were Democrats in the civil rights days that opposed civil rights," he said in a broadcast this past August. "They were Democrats. Bull Connor, Democrat. Lester Maddox, Democrat. George Wallace, Democrat. J. William Fulbright, Democrat." So have other prominent voices on the right. "As with the 1957 and 1960 civil rights acts, it was Republicans who passed the 1964 Civil Rights Act by huge majorities," Ann Coulter wrote back in May. "A distinctly smaller majority of Democrats voted for it."

What Rush and Ann (and the folks who e-mailed me and filled up the comments section at Lucianne.com) don't mention, of course, is that all of the Democrats who voted against civil rights back in the '60s were conservative white Southerners, while most of the Republicans who voted for civil rights were moderate-to-liberal Northerners -- and that in the years following the '64 vote, each of these groups migrated to the other party.

I've written about this history before, but it's worth going over once more. During the "radical Reconstruction" that followed the Civil War, liberal national Republicans installed liberal GOP governments throughout the South, stirring intense feelings of resentment, humiliation and resistance among most Southern whites. When Rutherford B. Hayes, convinced that these whites would be more cooperative if they were left to control their own affairs, ended Reconstruction in 1877, one Republican state government after another fell. Virtually every Southern white voter lined up with the Democratic Party, simply because the GOP had been the party of Reconstruction. Jim Crow laws were quickly enacted, and decades of segregation ensued.

In all this time, Northern Democrats were mostly content to look the other way, seeing the South as a crucial source of electoral support within Congress and in presidential elections. The overwhelming margins that Democratic White House candidates routinely ran up in the region can't be emphasized enough. In 1916, for instance, Woodrow Wilson won 85 percent of the vote in Louisiana, 92 percent in Mississippi and 96 percent in South Carolina; nationally, his share was 49 percent. In 1936, FDR took 98.5 percent in South Carolina and 97 percent in Mississippi. Even Adlai Stevenson, while getting crushed nationally by Dwight Eisenhower, took 70 percent in Georgia in 1952. For all intents and purposes, the Republican Party didn't exist in the South.

Civil rights changed this. The impetus was the Great Migration, the movement of millions of African-Americans away from the South and to the urban centers of the North and West Coast -- places where there were no Jim Crow laws to keep them from voting. Suddenly, civil rights became a priority for the Democratic Party's urban bosses; if they didn't go to bat for these new voters, they'd risk losing their grip on power -- especially with the rival Republican Party, then filled with educated liberal Northerners, compiling a much better record on the issue. (It was Republican Theodore Roosevelt, remember, who invited Booker T. Washington to dinner at the White House in 1901.) No longer could Northern Democrats ignore and abide Jim Crow.

In 1948, Democrats, urged on by an ambitious Minneapolis mayor named Hubert Humphrey, adopted a civil rights plank at their convention. Southern delegates promptly walked out and rallied around South Carolina's Democratic governor, Strom Thurmond, who won four Southern states (and 2.4 percent of the national popular vote) running as a "Dixiecrat" in November. Democrats managed to tamp down the South's anger for the next decade or so, but by '64 the issue could wait no longer. The party's officeholders and voters outside the South uniformly supported the sweeping civil rights bill working its way through Congress. President Lyndon Johnson, who had pushed through a watered-down civil rights bill as the Senate's majority leader back in 1957, did too. When he put his signature on the new law, LBJ supposedly noted that he'd just signed away the South for a generation.

At the same time, the Republican Party, which had racked up a largely admirable record on civil rights, took a sharp turn to the right, nominating for president Barry Goldwater, an Arizona senator who had supported Southern Democrats in their effort to filibuster the civil rights bill. The new law, Goldwater argued, would create a "police state" and foster an "informer" mentality among citizens. By all measures, Goldwater was no racist when it came to his personal views, but in 1964 he made common cause with every white Southerner who wanted to deny African-Americans federally guaranteed equality. These white Southerners, as noted above, had voted Democratic for their whole lives. But in the fall of '64, they rejected LBJ and embraced Goldwater in stunning numbers. In Mississippi, Goldwater claimed 87 percent of the vote. In Alabama, nearly 70 percent. In South Carolina, nearly 60 percent. Mind you, Goldwater only received 38 percent nationally -- one of the worst-ever showings for a major party candidate. He was roundly rejected in every corner of the country. The only voters who liked him? White Southern "Democrats."

Just consider Time magazine's state-by-state handicapping of the race a few weeks before Election Day '64. Mississippi? "Barry's anti-civil rights vote makes him an all but certain winner," the magazine (correctly) predicted. Louisiana? "Barry has been slipping, but the big segregationist vote north of New Orleans should put him over." (It did.) Here's how Time analyzed the politics of the "Democratic" South in the wake of the Civil Rights vote:

[Goldwater is] abloom in the South. Florida's Democratic candidate for Governor, Haydon Burns, said last week that he would not campaign for his party's national ticket, and added: "I expect the Republican candidate will have strong support in Florida." Louisiana's Democratic Governor John McKeithan admits that he may well decide to back Barry. The recent Mississippi Democratic convention was filled with pro-Goldwater sentiment. Georgia's Democratic Senators Richard Russell and Herman Talmadge both predict privately that today Barry could carry their state. Pollster Sam Lubell discovered last week that Goldwater is, as of now, running ahead of Johnson in Florida, Virginia, South Carolina and North Carolina. In Texas, Lubell found Lyndon holding an uneasy lead that could quickly vanish under the pressure of civil rights troubles.

Goldwater ended up carrying five Southern states in '64. The election marked the beginning of the region's steady, decades-long shift to the Republican Party. Think of Richard Nixon's "Southern strategy" (which a future Republican national chairman would apologize for) and Ronald Reagan's decision to tout "states' rights" as he launched his 1980 general election campaign in Philadelphia, Miss. (where three civil rights workers had been murdered just 16 years earlier). It didn't happen overnight, but Southern states began routinely voting for GOP candidates for president (with blips in 1976 and 1992, when the Democrats nominated Southerners), and Democratic officeholders began defecting to the Republican Party (although plenty of entrenched conservative Democratic officials finished out their careers with the party).

As the New York Times noted after this month's midterms, just about the only Democrats left in Congress from the old Confederacy represent majority black districts that were created by the Voting Rights Act after the 1990 census. Otherwise, as the paper put it, "Southern white Democrats in Congress have become as rare as a Dixie blizzard." In effect, the region's white voters have gone from uniformly Democratic to uniformly Republican. And it's obvious when and why the transformation really took hold.

So, yes, Rush, it's true: Plenty of Republicans did support civil rights back in 1964. They were moderates and liberals with names like Margaret Chase Smith, George Aiken, Clifford Case and Jacob Javits -- and as the GOP became an ideologically right-wing, Southern-dominated party they were, in many cases, driven out for being RINOs (Case and Javits both saw their careers end in Republican primaries, as the "New Right" targeted them in its purge campaign of the late '70s). The voters who'd elected them began to favor Democrats more regularly, a response to the GOP's embrace of Southern-style conservatism.

And, yes, Rush, it's also true that plenty of Democrats did oppose the Civil Rights Act in '64. It's just that they became Republicans (or started voting like Republicans) as soon as it became law.

For what it's worth, I responded to one of my email interlocutors on Tuesday with a (very truncated) version of this history. A few hours later, I received this response:

Was Martin Luther King one of those Southern Republicans? Tell me just what the Liberal Democrats have done for African Americans other than keeping them on the Plantation for voting purposes?