"Made in Dagenham": A patronizing film about working-class feminism

Sally Hawkins is tremendous, but "Made in Dagenham's" approach to the historic auto-plant strike just feels canned 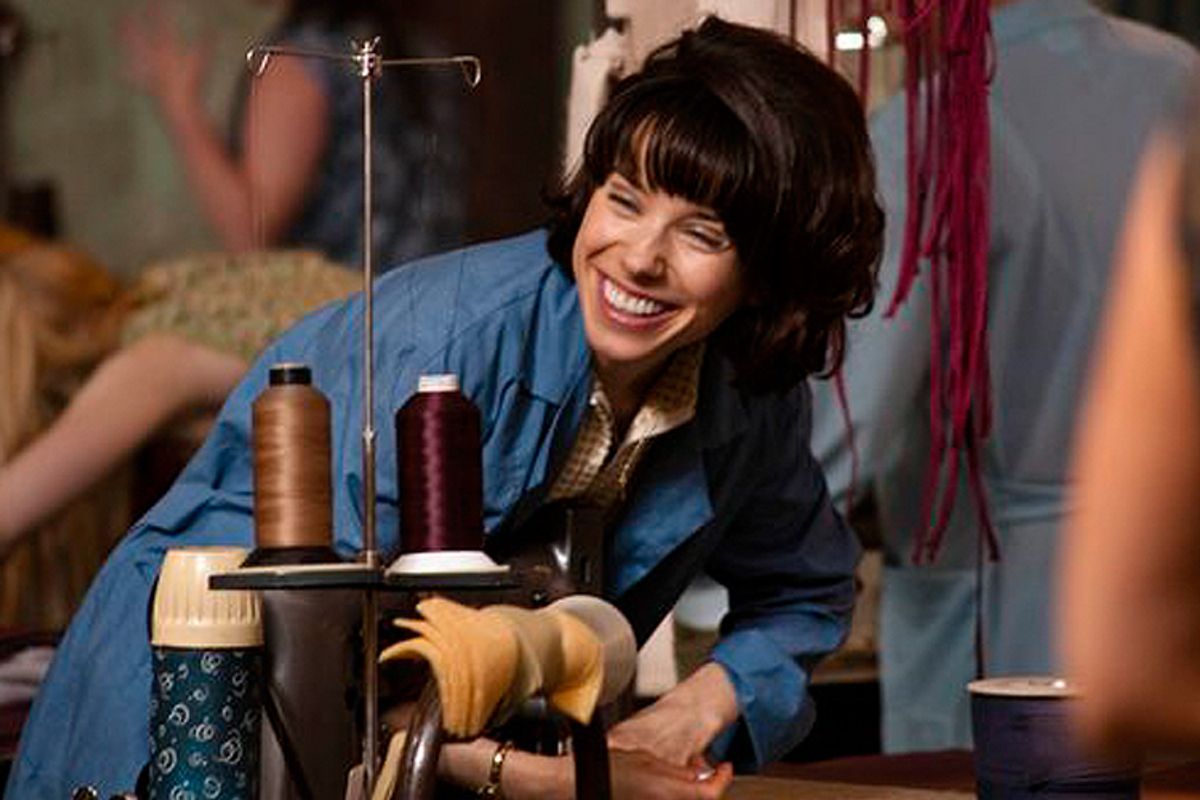 Sally Hawkins in "Made in Dagenham"
--

It's not like "Made in Dagenham" marks the first time a fascinating historical episode has been made into mediocre melodrama. Moviemakers have ransacked history since the medium was invented, but the combination too often results in bad movies and bad history. You can't even call "Made in Dagenham" bad -- it's a competent entertainment, built around an enjoyable performance by the superb English actress Sally Hawkins (Mike Leigh's "Happy-Go-Lucky"). But it does manage to take a crucial turning point in feminist and labor history -- an event loaded with ambiguous significance -- and render it into one of those gang-of-gals movies full of bicycles, reggae songs, underwear shots and scenes of emotional growth. (Memo to producers: You can't use Jimmy Cliff's "You Can Get It if You Really Want" in your movie. You just can't. It is against the law.)

There can be no doubt that the story of the female machinists' strike in 1968 at the Ford plant in Dagenham, England, is worth telling. That event in an east London industrial suburb had social consequences that were arguably a lot more meaningful and far-reaching than, say, the invention of Facebook. As an inspirational history lesson, director Nigel Cole and screenwriter Billy Ivory's "Made in Dagenham" gets the broad strokes across in dramatic fashion: At the height of late-'60s social unrest, a group of fewer than 200 working-class women brought Ford production to a halt, and in so doing forced the British labor movement, the British government and the ultra-conservative management of Ford to confront the immense wage gap between male and female workers. It was a moment that suggested class politics wasn't just for guys and feminism wasn't just for well-bred university girls.

All that stuff, the complicated social and political reverberations of the Dagenham strike, is totally fascinating -- but it's also just packing material around the edges of a standard-issue female-empowerment ensemble drama, complete with kicky period costumes, rapid Cockney chatter and shots of the women stripping down to their brassieres and slips for a day in the hot factory. I kept waiting for the Dagenham ladies to take off their clothes and do a calendar shoot, which is what happened in Cole's best-known film. Honestly, they might as well have, given that none of the characters in "Made in Dagenham" is based on a real person, and Ivory's script reverts to a hackneyed set of Brit-film female stereotypes: the spunky but addled housewife; the beehive-wearing sex bomb; the Twiggy-esque blonde; the grim-faced, self-sacrificing mum. No one seems to have remarked that making a movie about women's rights in which the female characters are all clichés is slightly odd.

Hawkins is being talked up as an Oscar contender for her starring role as Rita O'Grady, the brassy young wife and mother who gets thrust onto the front lines by Albert (Bob Hoskins), a sympathetic union leader. As always, Hawkins is immensely pleasurable to watch; she's knock-kneed, bucktoothed, skinny as a rail and imbued with an almost feral intensity. Her performance is full of dimensions -- Rita is raw, vulnerable, socially awkward, oddly sexy, driven by righteous indignation -- but we're still talking about a character cut from a template: Norma Rae meets Solidarity's Anna Walentynowicz, with an Oliver Twist accent.

Rita and the other female machinists at Dagenham begin with a narrow and specific grievance: Ford has reclassified them as unskilled workers to hold down their wages, even though their work (sewing seat covers by hand, with no pattern to follow) requires considerable expertise. After a one-day strike and tense meetings with labor leaders and Ford management, they realize they're facing a much bigger issue: British industry's high-wage contracts with the major male-dominated unions are supported by a subordinate caste of low-wage female labor. Rita tours the country addressing other female workers, makes an unlikely alliance with a Ford executive's Oxford-educated wife (Rosamund Pike) and ends up sipping sherry at Westminster Palace with Barbara Castle (Miranda Richardson), a Labour Party cabinet minister who dares to defy the power of Ford.

Creating a fictional composite to anchor a historical tale is defensible enough (there was and is no Rita O'Grady), but "Made in Dagenham" is an awkward mishmash that blends a lot of historical intrigue with the formulaic character interplay in the foreground. Like most of the men in Dagenham, Rita's husband, Eddie (Danny Mays), doesn't get it, but the filmmakers lack the stomach to make him cruel or unsympathetic. Rita's co-worker Brenda (Andrea Riseborough) has a huge bouffant and humps anything in trousers, while Sandra (Jamie Winstone) wears Mary Quant hot pants and dreams of stardom, and shop steward Connie (Geraldine James) gloomily tends to her husband, still suffering from World War II trauma.

I feel pretty sure that "Made in Dagenham" comes with honorable infotainment intentions (thanks largely to producer Stephen Woolley, an indefatigable fighter of the good fight), but the movie is ultimately almost as patronizing to women as the devious union boss (Kenneth Cranham) and unctuous Ford executive (Rupert Graves) who try to outflank Rita. Whether they're as nefarious as those two or as honorable as Hoskins' Albert, the male characters seem like individuals, while the women come off as inspirational symbols of female camaraderie and diversity. Don't get me wrong: As genial, positive-message holiday viewing goes, you could do a hell of a lot worse. "Made in Dagenham" offers girl power in a can, lightly seasoned with swinging London and topped with cute-clumsy Sally Hawkins charming us to pieces. But the real women of Dagenham deserve better, and so do their sisters in the audience.

"Made in Dagenham" opens Nov. 19 in New York and Los Angeles, with wider national release to follow.