In a gloomy, impressive penultimate chapter, Voldemort's power grows while our heroes wander the wilderness 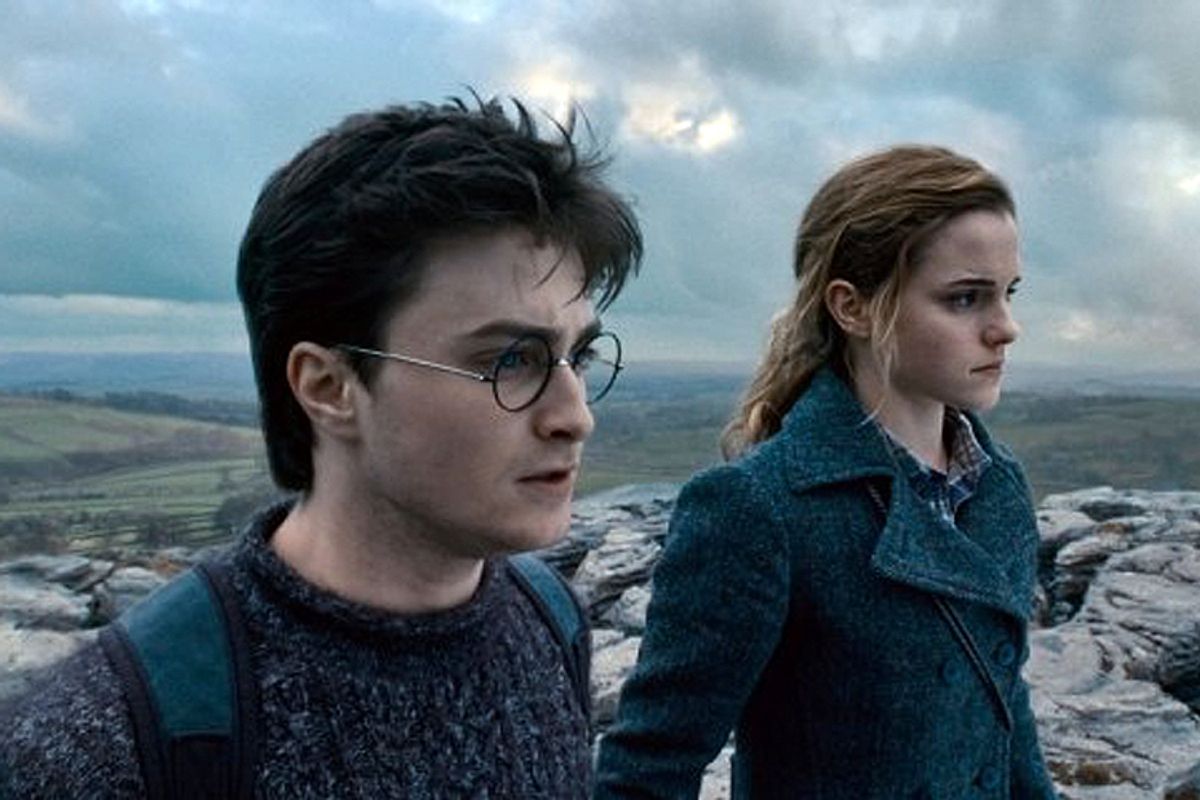 Daniel Radcliffe and Emma Watson in "Harry Potter and the Deathly Hallows: Part 1"
--

Here's a rule I'm trying on for size: Any Hollywood movie with a really long name is already completely sure of itself, and feels no need to seduce you with blunt monosyllables. Maybe all that clunky verbiage is in itself calming to a crazed fan-base, as it chews through its restraints in demented desperation; think "Indiana Jones and the Kingdom of the Crystal Skull" or "The Lord of the Rings: The Return of the King" or "Pirates of the Caribbean: The Curse of the Black Pearl." (For every rule there must be an exception, and therewith I give you "Master and Commander: The Far Side of the World," launching pad for a franchise that was not to be.)

That brings us to "Harry Potter and the Deathly Hallows: Part 1," which embodies both the title-stretching and episode-stretching tendencies of megabucks movie franchises. The seventh and last volume in J.K. Rowling's series of best-selling fantasy novels has been split in half for Hollywood purposes, making this long, dour, impressive and handsome motion picture the penultimate chapter, largely designed to build up the heavy-duty suspense before the climax is delivered next year. It's difficult to know what to tell you about "HP7.5," as bloggers and Twitter denizens have dubbed it, since the population of the world is largely divided between those who must see it at the earliest opportunity and those who couldn't be dragged by a team of horses.

I can offer some arithmetical guidance for the tiny undecided minority, at least: The over-under for making sense of "Deathly Hallows" is five. If your consumption of Potter books and movies totals at least that much, and includes one or more iterations of "Harry Potter and the Half-Blood Prince" (sixth in the series), you should be fine. If you lack at least a moderate degree of immersion in the Potter canon, though, then this movie seriously isn't for you. Sure, doing some homework on Wikipedia or fan sites might help, but it's no substitute; you won't greet the members of the extended Weasley family with the same affection, welcome the deus-ex-machina reappearance of the magical elf Dobby with the same joy, or squirm in your seat at the ongoing soul-torment visible within Draco Malfoy and Severus Snape.

As I was constantly reminded by the histrionic gasping, cackling and sobbing of a handful of Potterphiles a few rows behind me at the New York press screening I attended, my personal investment in this series is very low. Rowling is a capable storyteller, but I find her prose weak and her borrowings entirely too blatant. The movies have been up and down, with a tendency to run long and overload themselves with silly schoolboy humor and bogus-looking CGI battles. Overall, though, they've been constructed with care and craft, and as the central cast members -- Daniel Radcliffe as the orphaned Jesus-wizard Harry, Emma Watson as Hermione Granger and Rupert Grint as Ron Weasley -- have aged into their roles, the tone has grown darker and the series has tackled what I take to be Rowling's central themes: the painful transition from childhood to adulthood, the loss of parents and loved ones, the first intimations of personal mortality.

With "Harry Potter and the Deathly Hallows: Part 1," we reach that lonely stretch near the end of a quest narrative where the heroes must leave the comforts of home behind and voyage through the wilderness, while the long shadow of the enemy hangs over the land. (Frodo and Sam alone in Mordor, of course, though there are numerous other examples.) I'm going to spoil the end of "Half-Blood Prince" for you neophytes right now: Harry's beloved mentor Albus Dumbledore (Michael Gambon, in the part originated by the late Richard Harris) has been killed by turncoat Severus Snape (Alan Rickman) under circumstances that remain, ah, somewhat murky. Hogwarts, the cozy-spooky school of witchcraft where so much of the story has been set, has fallen into the clutches of Lord Voldemort (Ralph Fiennes in fish-face makeup), who is feeding the staff one by one to his enormous pet snake. The Ministry of Magic in London follows suit, and it appears that Voldemort will soon subjugate both the realm of magic and the non-magical Muggle world to his pseudo-Nazi rule.

At the risk of hijacking this review onto a meta-geeky tangent, I'm interested in people's reactions to the fact that Rowling uses her Dark Lord, whose name is so scary most people won't utter it, as a more-or-less regular character (with an unfortunate resemblance, at least in his movie form, to the Creature from the Black Lagoon). J.R.R. Tolkien's Sauron never appears in person in "The Lord of the Rings," although he is said to possess a physical form, and it's fair to say that over the years Satan has been highly inconsistent about this. In some Christian fables and folk tales (and in Milton's "Paradise Lost") he shows up as a charismatic, articulate fellow -- he is a fallen angel, after all -- whereas more recently he seems to prefer the Too Scary to Be Seen mode. How do you like your Dark Lord: Comic-book supervillain with gills, or numinous hostile entity?

For a brief interlude near the beginning of the film, Harry, Ron and Hermione are protected at a safe house by an alliance of old friends, French Resistance-style. But with Voldemort's Death Eaters roaming the world, no place is safe, and after all the trio are now adolescent wizards who guzzle "butter beer" and have love lives (mercifully, we do not learn the intimate details). Director David Yates, who's been in charge of the series since "Harry Potter and the Order of the Phoenix," takes the threesome on an extended, somewhat lugubrious camping trip through some sodden but impressive British landscapes, where they get on each other's nerves and grow increasingly bummed out by the Horcrux, a fragment of Voldemort's soul encased in a pendant, which they need to destroy but can't. (By my count, two other Horcruxes have already been destroyed, with four more still undiscovered. But don't trust me on this stuff.)

In this part of the movie, and indeed for much of "Deathly Hallows," it feels as if Harry and his mates have wandered into some other film in some other genre. Maybe it's a post-apocalyptic yarn, and the wizarding trio are the last living normal humans, fleeing from the cities overrun with mutant zombies and "Road Warrior" vigilantes. Maybe it's an E. Nesbit update, about teenage orphans going it alone. (Nesbit is a less obvious influence on Rowling than Tolkien is, but she's definitely in there.) Maybe it's one of those disarming Communist-era fables about a family dealing with father's long absence "on business." Potterphiles presumably would not show up in large numbers for any of those movies, but one of the great things about a fantasy epic, or at least a good one, is that it ends up enfolding many kinds of stories and many approaches to stories.

There's some more typical Potter-style action high jinks in "Deathly Hallows," including a daring raid on the Voldemort-occupied Ministry of Magic and a critical battle against Goth princess Bellatrix Lestrange (Helena Bonham Carter), but I think Yates and his cast are at their best in the quieter passages. Hermione, perhaps the series' strongest character, must bid farewell to her Muggle parents in more than one sense; in a heartbreaking scene, she actually erases herself from their memory, to save them from becoming targets of evil. When Ron vanishes from the story for a while (I say no more than that!), Harry and Hermione dance together wistfully, late one night, to Nick Cave's elegiac "O Children," in a scene that outdoes the rest of the series for melancholy poetry. The sexual tension between those two remains unconsummated and barely acknowledged, but there's a flicker -- and if you ask me, that subterranean flame keeps the whole story going.

Along their lonely road, the three young-adult wizards hear a children's story retold (via charming, creepy cutout animation) about three magical objects given by Death to travelers: the Resurrection Stone, which can be used to raise the dead; the Elder Wand, against which even the most powerful magician is defenseless; and the Cloak of Invisibility. If Voldemort can gather these Deathly Hallows before Harry and company destroy the Horcruxes, he will become the immortal Master of Death (known in the Muggle world as Dick Cheney). Serious Potter fans already know exactly what will happen when Harry meets Voldemort once more, in the apocalyptic last battle of this quasi-Christian allegory, but Yates and screenwriter Steve Kloves have done a fine job of building up a big, black foreboding cloud in this next-to-last installment.

In fact, Warner Bros. and the producers of the Potter series have hewed very closely to the old-fashioned manner and settings of Rowling's books, which share with Tolkien's "Lord of the Rings" an avowed nostalgia for the Englishness of a bygone pre-industrial age. It would have been easy to turn this series into transatlantic kitsch -- but in fact the kitsch is respectfully made, and distinctively British. By any reasonable measure this is now the most successful series of films in history, but that happened because the filmmakers were forced to understand that the fantasy audience was discerning and literate, and exceptionally eager to air its likes and dislikes. If the audience for, say, romances or thrillers were even half as organized and proactive, we'd be subjected to a lot less insulting garbage.