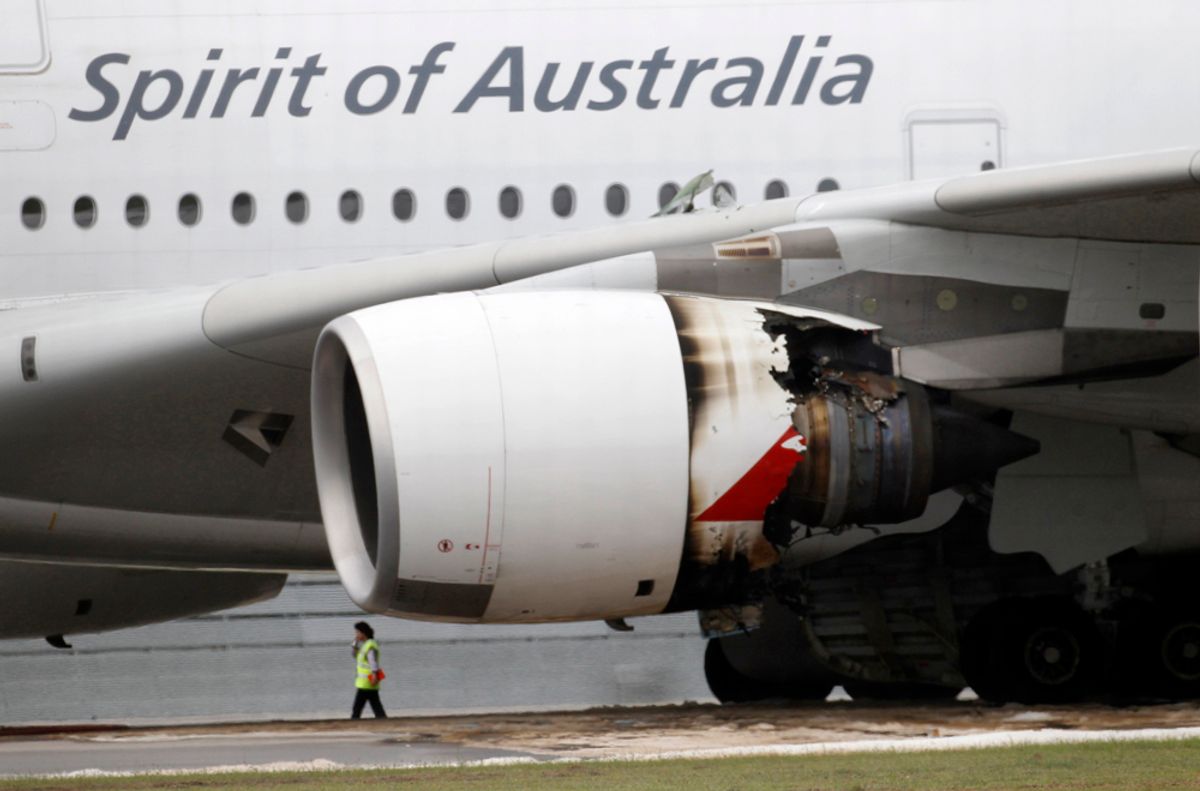 Qantas Airways A-380 passenger plane QF32 with its partially damaged engine sits on the tarmac after making an emergency landing at Changi airport in Singapore November 4, 2010. The Qantas Airways passenger plane carrying 459 people was forced to shut down an engine and return to to Singapore's Changi airport on Thursday, ending speculation that it had crashed, the airline and Singapore state TV said. REUTERS/Vivek Prakash (SINGAPORE - Tags: TRANSPORT DISASTER BUSINESS) (Â© Vivek Prakash / Reuters)
--

On Nov. 4, the left inboard engine of a Qantas Airways Airbus A380 suffered an uncontained failure shortly after takeoff from Singapore, peppering the huge jetliner with shrapnel. The plane returned to Singapore for an emergency landing. There were no injuries, and at first the incident seemed minor.

That's how I described it, for one, here on Salon. What follows is not a mea culpa, exactly -- I wrote my article when the story first broke, and relatively little was known -- but it's definitely time for an update. It turns out things were a lot more serious than it first appeared: The failure of the giant Rolls-Royce turbofan triggered a massive fuel leak, as well as 50 or more failures and malfunctions of various systems and subsystems, some more serious than others and not all of which are yet understood.

Bear in mind there were five Qantas pilots on the flight deck at the time, including a training captain and relief crew. All five were suddenly a lot busier than they ever expected to be, handling a slew of warning and caution messages; running checklists; coordinating communications with company dispatchers, maintenance staff, air traffic control, passengers and flight attendants. They did their best to follow the checklists and standard operating procedures, but this was a scenario of unusual and rapidly compounding problems that required some quick decision-making and, frankly, a bit of improvising.

The following rundown is drawn from second- or third-hand accounts, but I take it to be reliable. This, in a nutshell, is what the crew of Flight QF32 was dealing with.

Additionally, a substantial amount of fuel became trapped in the aft, so-called trim tank, leading to a serious center-of-gravity issue during descent and landing. The crew received repeated caution messages about this impending out-of-balance condition, but was unable to address it.

(Planes slow down in stages, deploying flaps, slats and gear at particular target speeds. These speeds are usually obtained from the flight management system, but reportedly there weren't enough data fields on the input screen to account for all the necessary corrections. The crew did the best it could, entering what it thought were the most critical corrections to come up with reasonable numbers.)

I have been told that the crew chose to commence its approach not because the problems were sorted out, but because of worries over fuel balance and center-of-gravity.

In the end, the plane used virtually all of the 13,000-foot runway at Changi Airport. Brake temperatures neared 1,000 degrees while fuel poured from the punctured left-side tanks.

The crew elected not to evacuate as the emergency trucks were on hand instantly, but a fire was a real possibility.

Really the biggest issue was about stopping. Pilots practice overweight or high-speed landings all the time in simulators, but this was a perfect storm of multiple failures.

A near disaster? Not quite, but it could have been much, much worse than it was. Had the plane gone off the runway and caught fire, or burst into flames because fuel was ignited by the overheated brakes, it is still entirely possible that everybody could have survived (see Air France in Toronto, et al.). However, Qantas Airways' proud record of zero fatalities, intact since the 1950s, would have been in very serious jeopardy.

Was this an Airbus issue, a Rolls-Royce issue, a Qantas issue or some combination? And were the jet's cascading malfunctions and redundancy failures a symptom of internal design flaws? All newer airplane models endure certain teething problems -- one remembers the 747, for example, whose early-on difficulties nearly bankrupted Boeing -- but I reckon this was a closer and more perplexing call than anybody at Airbus, Rolls or Qantas is comfortable with.

We'll find out eventually. Until then, all we know for sure is that more than 400 people emerged unscathed thanks to a well-trained and fast-acting crew -- and to a little bit of luck as well.