The Ghailani verdict and American justice

Accused terrorist Ghailani is convicted of 1 charge, acquitted of 280. Here's why the people crying foul are wrong 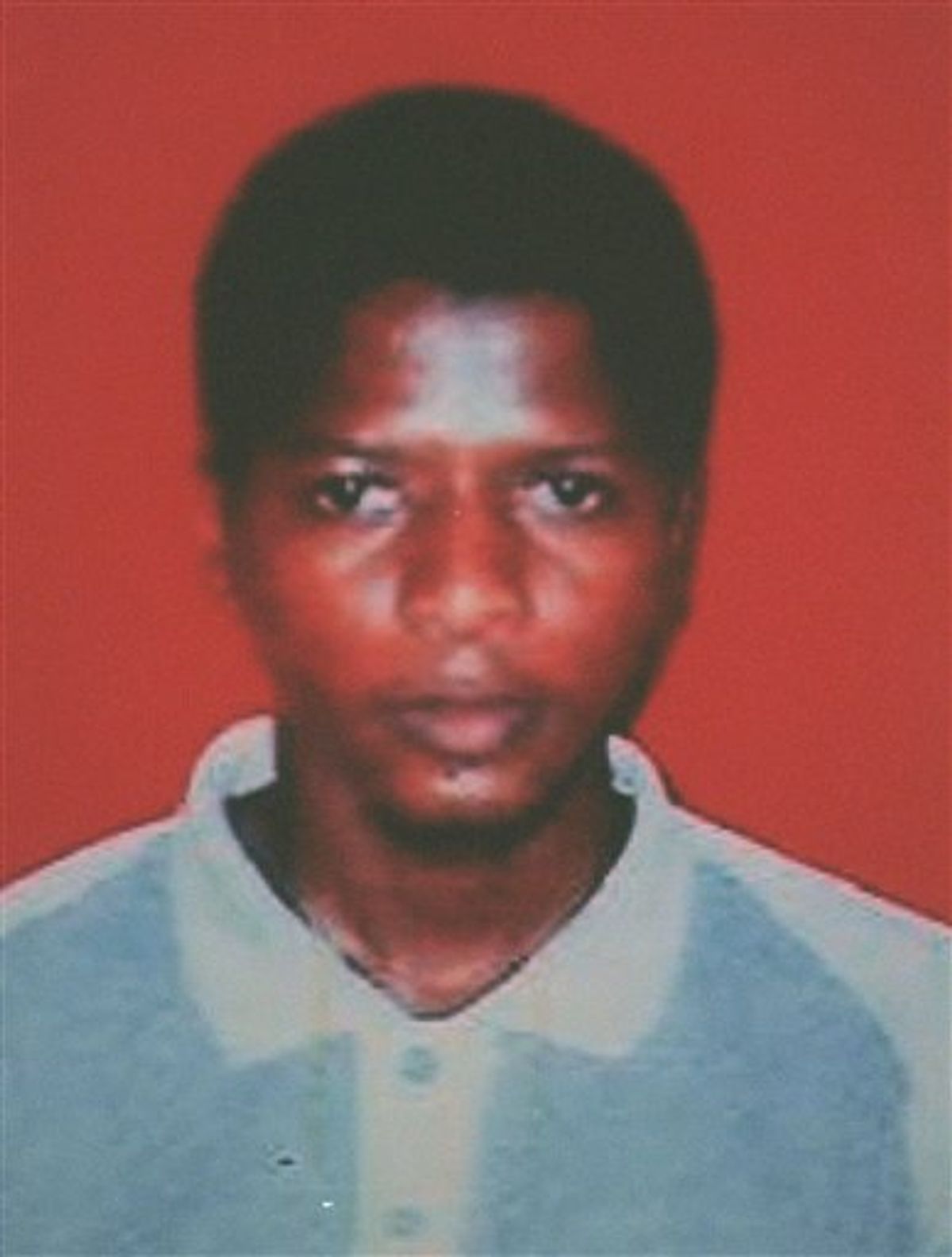 FILE - An undated file photo provided by the U.S. District Attorney's office shows Ahmed Khalfan Ghailani. Ghailani, the first Guantanamo detainee to face a civilian trial, has been acquitted in New York City of all but one charge accusing him of a deadly 1998 plot to bomb two U.S. embassies in Africa. (AP Photo/File) (AP)
--

A federal jury in New York yesterday returned a guilty verdict against accused Terrorist Ahmed Ghailani on one count of conspiracy to blow up a government building, a crime which entails a sentence of 20 years to life, but acquitted him on more than 280 charges of murder and conspiracy relating to the 1998 bombings of the U.S. embassies in Kenya and Tanzania.  Last month, the federal judge presiding over the case, Lewis Kaplan, banned the testimony of a key witness because the Government under George Bush and Dick Cheney learned of his identity not through legal means but instead by torturing Ghailani (and also possibly coerced the testimony of that witness).  The verdict will provoke predictable, fact-free, fear-mongering attacks on the American judicial system and on President Obama for using it in this case -- renowned legal scholar Liz Cheney and heralded warrior Bill Kristol wasted no time spewing these trite accusations -- but this outcome actually proves the opposite.

Initially, it should be noted that the verdict in this case -- no matter what it was -- would be largely inconsequential in terms of Ghailani's imprisonment.  He has already been imprisoned without charges for six years, including two years at a CIA "black site," and yesterday's verdict means he will spend decades more in prison.

But even had he been acquitted on all counts, the Obama administration had made clear that it would simply continue to imprison him anyway under what it claims is the President's "post-acquittal detention power" -- i.e., when an accused Terrorist is wholly acquitted in court, he can still be imprisoned indefinitely by the U.S. Government under the "law of war" even when the factual bases for the claim that he's an "enemy combatant" (i.e. that he blew up the two embassies) are the same ones underlying the crimes for which he was fully acquitted after a full trial.  When he banned the testimony of the key witness, Judge Kaplan, somewhat cravenly, alluded to and implicitly endorsed this extraordinary detention theory as a means of assuring the public he had done nothing to endanger them with his ruling (emphasis added):

[Ghailani's] status as an "enemy combatant" probably would permit his detention as something akin to a prisoner of war until hostilities between the United States and Al Qaeda and the Taliban end even if he were found not guilty in this case.

Most news accounts are emphasizing that trying Ghailani in a civilian court was intended by the Obama DOJ to be a "showcase" for how effective trials can be in punishing Terrorists.  That's a commendable goal, and Holder's decision to try Ghailani in a real court should be defended by anyone who believes in the rule of law and the Constitution.  But given these realities, this was more "show trial" than "showcase" since the Government would simply have imprisoned him, likely forever, even if he had been acquitted on all counts.

Then there is the false premise -- found at the center of every attack on the Obama DOJ's conduct here -- that the key witness would not have been excluded had Ghailani had been put before a military commission at Guantanamo.  That is simply untrue.  The current rules governing those military tribunals bar the use of torture-obtained evidence to roughly the same extent as real courts do.  Anyone who doubts that should simply read Rule 304(a)(1) and (5) of the Military Commissions Manual, found on page 205 of the document:

[304(a)(1)]  No statement, obtained by the use of torture, or by cruel, inhuman, or degrading treatment. . . . whether or not under color of law, shall be admissible in a trial by military commission . . . .

[304(a)(5)] Evidence derived from a statement that would be excluded under section (a)(1) of this rule may not be received in evidence against an accused who made the statement if the accused makes a timely motion to suppress or an objection . . . .

The only exceptions to those exclusionary rules are essentially identical to those used in the judicial system, which were applied by Judge Kaplan but found to be inapplicable ("the evidence would have been obtained even if the statement had not been made; or [] use of such evidence would otherwise be consistent with the interests of justice").  As The New York Times' Charlie Savage pointed out this morning, "Judge Kaplan strongly suggested in a footnote that a military commission judge would have excluded that testimony, too, pointing to restrictions against the use of evidence obtained by torture in military trials."  Savage went on to note:  "still, arguments over the factual details of the case were overshadowed by the political dynamics of the verdict" -- meaning that nobody is going to let the facts get in the way of a nice right-wing, fear-mongering, liberty-attacking orgy.  (And all of that's entirely independent of the fact that civilian trials have proven far more effective [if not more just] at punishing accused Terrorists than military commissions have been.).

But the most important point here is that one either believes in the American system of justice or one does not.  When a reviled defendant is acquitted in court, and torture-obtained evidence is excluded, that isn't proof that the justice system is broken; it's proof that it works.  A "justice system" which guarantees convictions -- or which allows the Government to rely on evidence extracted from torture -- isn't a justice system at all, by definition.  The New Yorker's Amy Davidson made this point quite well today:

Let’s be clear: if time in the extra-judicial limbo of black sites, and the torture that caused some evidence to be excluded, makes prosecutors’ jobs harder, the problem is with the black sites and the torture, and not with the civilian trials that might eventually not work out quite the way everyone likes. It’s a point that bears some repeating.  Our legal system is not a machine for producing the maximum number of convictions, regardless of the law.  Jurors are watching the government, too, as well they should. Ghailani today could be anyone tomorrow.

It's supposed to be extremely difficult for the Government to win the right to put someone in a cage for their entire lives, or to kill them.  Having lived under a tyranny in which there were very few barriers impeding the leader's desire to imprison or otherwise punish someone -- and having waged a war to escape that oppression -- the Founders designed it this way on purpose.  And they did so with the full knowledge that clearly guilty and even extremely evil people would sometimes receive something other than the punishment they deserve.  Here's how Thomas Jefferson weighed those considerations, as expressed in a 1791 letter:  "I would rather be exposed to the inconveniencies attending too much liberty than those attending too small a degree of it."

That courageous declaration -- and not the desperate, eager desire to sacrifice safeguards in single-minded, fearful pursuit of Security -- was the central calculus that drove the American Founding, shaped the U.S. Constitution, and formed the political identity which Americans claimed to embrace for the next two centuries.  As usual, the people who are now screaming the loudest over the need to defend American Freedom are the ones who believe least in the values that were intended to define it and the principles that were intended to safeguard it.