As she publicly wrestles with Chaz's gender reassignment, the American icon continues to inspire 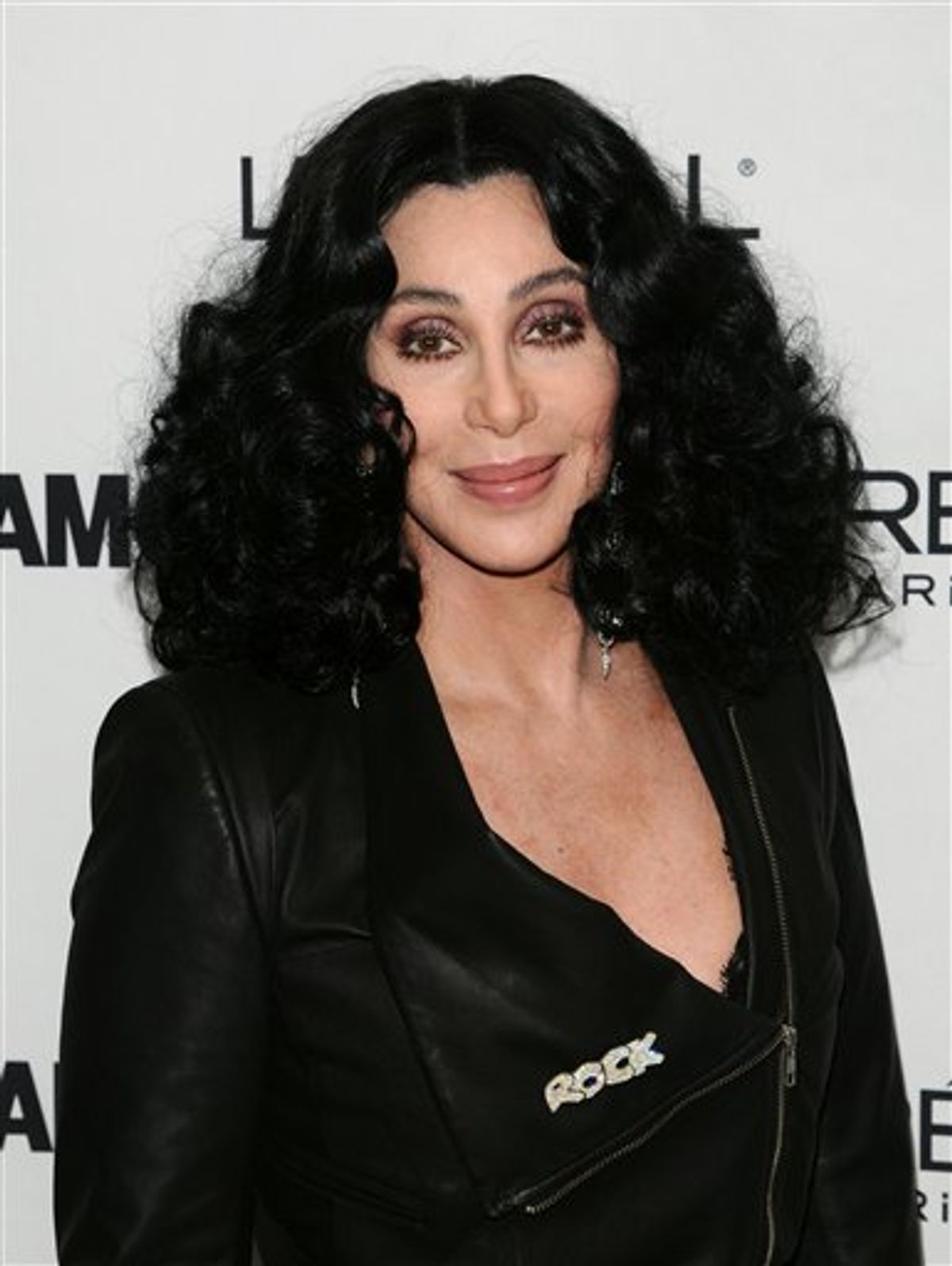 Thank God for Cher. The woman ranks right up there with the cotton gin and baseball on the list of greatest things America ever invented. We still have to wait a week for her promisingly campy "Burlesque," but she's already doing the publicity rounds to promote it -- and reminding us that she's not just an icon, she's an occasionally awkward, struggling-to-get-it-right mother of a transgender child.

In an interview for "20/20" that airs Friday night, Cher tells Cynthia McFadden, "I have two sons. Never thought that would be, but, you know? You go through life, and you get what you get. You get what belongs to you." And on "Letterman" last week, she was all Cher, strutting out to the strains of "Half Breed" and planting a big wet one on Dave. But then she sat down and discussed, with clarity and compassion, her firstborn, Chaz -- nee Chastity -- and his gender reassignment.

Nobody who could inspire so many legions of drag queens can be a stranger to the concept of gender fluidity, and Cher's relish of her status of diva is undiminished at 64. On "Letterman," she giddily related going to a gay Jewish wedding ("which for me was like a busman's holiday") and having a guest ask for her card -- because she was "the best" Cher impersonator the person had ever seen. But when it comes to her own offspring, that famous Cher openness hasn't always been in evidence. Chaz has admitted that his mother initially "went ballistic" before coming around to acceptance when he came out as a lesbian to her 1987.

Today, Cher confesses she's gone through similar soul-searching over Chaz's very public gender reassignment, which began last year. On Wednesday she gave the Advocate her advice for other parents of transgender kids, saying: "Take it slowly. There are so many feelings that come up and most of them are difficult. And you go through a lot of changes, just as Chaz was going through whatever her changes were. One time I called, and she obviously had forgotten to change her voicemail, and I thought, 'Oh my God, that's probably the last time I'm going to hear the voice I've known my whole life.' There are small things you take for granted. It took a long time for me to know, this is the same person I've known my whole life." That's a huge message to parents and family and friends of LGBT individuals: The person who comes out to you is still the person you love. You may have to tweak your vision of the person, but go ahead, do the work. If Cher can, you can.

On "Letterman," for example, she was still flailing around how to refer to Chaz and his new identity. "I don't know what made her change her mind," she said, interrupting herself to note, "I still haven't got the pronouns right, but she says that's not so important." And then she did get the pronoun right, declaring, "He said to me one day, 'I think I have to do this.' ... I said if you have to do this, you have to do it. I wasn't always able to be quite as calm, but that day I was calm. And I thought this is what has to happen." That's not just Cher talking -- that's a pretty cool mom.

Even as she wrestles with labels, saying Chaz "is a lesbian, but it's not the same ... No, that doesn't work," Cher understands what every parent needs to keep in mind forever -- that her child is still first and foremost her child, and every other adjective comes in a distant second. And if you mess with family, like when Bill Maher sniped of Chaz's gender transition that "If [Cher] was your mother, you would [transition] too," you could do worse than to emulate Cher's hearty retort: "Fuck him."

She's one of a kind. Nobody else in the planet can walk in Cher's sky-high shoes. But that doesn’t mean she can't put herself in someone else's, especially when that person is her kid. "I like being a girl," she explains to "20/20." "If I woke up tomorrow and I was in a guy's body, I would just be flipped out, and it would just be horrendous for me. And that's all I can think of. That's the way I put myself in Chaz's place." Empathy -- it's harder to master than the high notes in "Gypsies, Tramps, and Thieves," and it's endlessly good for the soul. Underneath all the many layers of wigs and sparkles, what makes Cher so enduringly special is her realness, her willingness to say to world that she gets confused and she gets it wrong sometimes, but she keeps trying anyway, because that's the right thing to do. And that what makes the spangly, big-haired queen of Vegas a role model for us all.