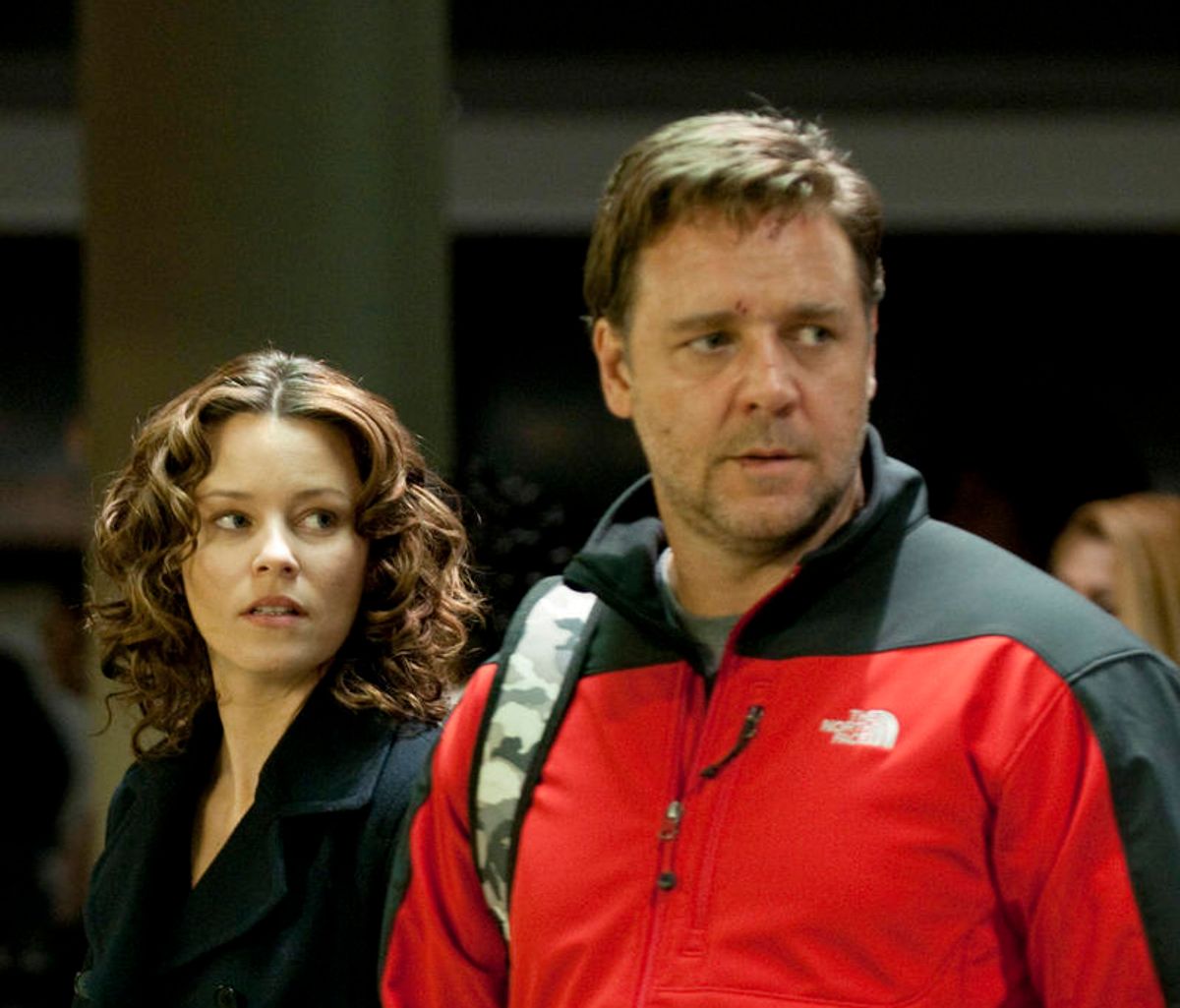 Elizabeth Banks and Russell Crowe in "The Next Three Days"
--

I'll say one thing for "The Next Three Days," a ponderous but mesmerizing tick-tock thriller starring Russell Crowe in his depresso-shlump mode, unshaven and unlaundered and apparently making frequent midnight raids on the fridge. It's a way better use of writer-director Paul Haggis' peculiar talents than the Oscar-sweeping 2005 "Crash." I know, I know -- there are those of you out there who found "Crash" powerful and moving and who wept tears of sadness and joy and wonder, and I have no choice but to take you at your word and marvel at the variety of human feeling. Personally, that film's pileup of artifice, sentimentality and unlikely coincidence hit me like an overdose of month-old Halloween candy, but chacun à son whatever -- and anyway, "The Next Three Days" helped me understand Haggis and "Crash" a little better.

In "Crash," Haggis seemed to be presenting his beautiful people and impossible events as if they might hypothetically occur in the real world and therefore possess, y'know, social significance. "Next Three Days" makes no such claims, unless you think it's likely that a community-college prof who lectures boringly about "Don Quixote" (why is academic work always presented so wretchedly in the movies?) is going to hatch the most ingenious prison break in the history of prison breaks to spring his convicted-murderer wife from the can. (Haggis wrote the last two James Bond movies, so he's no stranger to fantasy-adventure movies.) And yes, the fact that John Brennan (Crowe) teaches Cervantes' picaresque novel is meant to be a ding-ding-ding moment: He tilts at windmills, dreams the impossible dream, etc.

John and his peroxide-blond wife, Lara (Elizabeth Banks), purportedly lead a normal, yuppified life, raising their 3-year-old son in the Pittsburgh suburbs. But normalcy in a Haggis movie is always normalcy on steroids; the guys are brooding and muscular and the women are implausibly hot (if, that is, you find the dental-hygienist type hot). Lara is also hot as in hot-tempered, and after she has a huge fight with her boss one evening, the boss is found with her head caved in and Lara comes home with blood on her raincoat. So the cops interrupt suburban breakfast hour with a warrant signed by Judge Kafka, bust Lara for murder, rough up John a little and Taser the 3-year-old. OK, they don't do that last part, which reflects unusual restraint on Haggis' part.

The blood matches the bitchy dead boss, Lara's prints are found on the murder weapon, and a witness saw her leaving the scene. Nobody listens to her protestations that the killer was a random homeless person, maybe because that's what middle-class white people always say after they commit heinous crimes. Even John may harbor secret doubts about his wife's innocence, and for much of the film we're left wondering whether Haggis will supply some elaborate and ridiculous Rube Goldberg-style reconstruction of the crime that will solve the mystery. OK, no -- we don't wonder whether that will happen, only when.

While Lara languishes in the jug, John settles into a pattern of stolid, gloomy parenting, hopeless legal appeals and untucked chamois shirts, while trying to avoid the gaze of the implausibly hot, ultra-skinny single mom (Olivia Wilde) at the playground. You know how that scene goes:

Implausibly Hot Single Mom: Please come to this super-innocent, kid-oriented event. With your kid. I am so not hitting on you.

IHSM [brightly]: I'd love to meet your wife!

GRCD: No, no, no. Nothing like your pathetic situation. She's in prison. She didn't do it.

IHSM: Sure she didn't. If you ever get off the crack pipe, I'll be over here pining for you by the faux-Polynesian play structure.

Thing is, despite my mockery, "The Next Three Days" exerts a powerful narrative pull, especially once you get past its inflated midsection, which is full of legal truisms about how guilt and innocence don't matter and shots of Rusty staring into the middle distance. Haggis' screenplay is based on a little-seen French thriller called "Pour Elle," which asks one of those Hitchcock questions: Can this ordinary, unprepossessing guy transform himself into a master criminal for love? And if he can, will the woman he's doing it all for still recognize him? There's nothing subtle about the plot or the script, but Crowe, always a master at portraying states of masculine despair and denial, provides a measured, careful performance as a man who comes to understand that his only hope for reassembling his family lies in doing something that is almost impossible.

Little by little, John transforms himself into an escape artist, learning about "bump keys" on the Internet, or arranging a Brooklyn barroom meeting with an ex-con turned author (Liam Neeson) with numerous jailbreaks on his record. As John hatches his incredibly complicated plot -- which involves robbing drug dealers, switching medical records, buying fake passports from a deaf biker (!), covering the walls of his apartment with charts and maps, and leaving a trail of false clues behind him -- a pair of enterprising Pittsburgh cops (Jason Beghe and Aisha Hinds) begin to sniff him out, which oh-so-slowly ramps up the momentum. There are nice performances around the edges from Neeson, from a near-silent Brian Dennehy as John's dad and from Lennie James as a cynical police lieutenant who thinks he's seen it all but definitely hasn't seen this.

This is a prison-break thriller as imagined by a Russian novelist; it's slow and portentous and wretchedly excessive (I've already mentioned the deaf biker), and as ever Haggis likes to finish off his scenes with the Pounding Jackhammer of Obviousness. But the actual escape, when we finally get there, is a wrenching, tense, beautiful construction, full of lovely shots (by cinematographer Stéphane Fontaine) and hair-raising edits. Many things go wrong, of course, and the cops are just seconds behind. Most important, Haggis keeps us in suspense about the central question -- will a Hollywood movie allow its hero to get away with a completely antisocial crime, an act of vigilante justice, or will reason and order somehow be restored?

Movies Oscars Our Picks The Next Three Days