This Week in Crazy: Mel Gibson

Twenty-five years ago, he was the Sexiest Man Alive. But now, he's making headlines again for all the wrong reasons 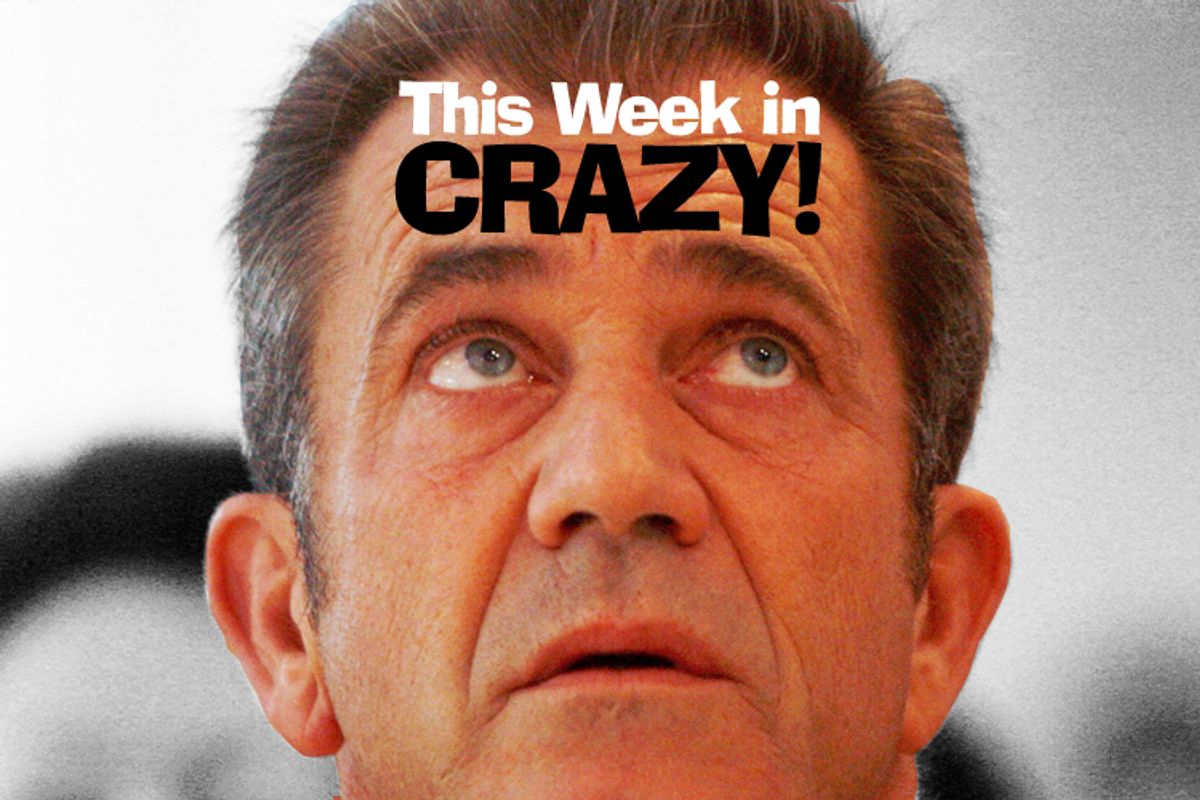 Ryan Reynolds, don't let this happen to you. As People magazine celebrates the 25th anniversary of its Sexiest Man Alive! (exclamation point required) issue this week, its first king of sexy, Mel Gibson, is still every inch the newsmaking superstar. It's just that these days, he's better known as that guy with the rage issues.

You know things are bad when an Oscar-winning actor and director's biggest release this year was the slew of epithet-laced telephone tirades purportedly aimed at his estranged girlfriend. And Gibson made headlines again this week when it was revealed that he admitted, in court documents, that he slapped Oksana Grigorieva hard enough to knock out her dental veneers during a vicious January argument. But it's OK because "I did not slap her hard, I was just trying to shock her so that she would stop screaming, continuing shaking Lucia back and forth." Oh, well, when you put it that way, Crazy Sauce.

Gibson has not hesitated to go on the offensive in his custody case over baby daughter Lucia, claiming that Grigorieva "is lying about Lucia's alleged injuries" the night he smacked her and saying that she inflicted her own cuts and bruises. But he has never spoken about the authenticity of the notorious scream-fest tapes, nor has her ever claimed that Grigorieva assaulted or attempted to assault him.

He does, however, clearly take umbrage with being painted as a hitter when he is in fact merely a slapper. What's the diff? Well, a man who's petitioning for full custody of his child might have an uphill battle if he, as Grigorieva told Larry King this week, "hit me and choked me in front of my son and brandished a gun at me." Gibson says in court papers that's not how it went down. However, he has, in the past, admitted a fondness for getting his hands into the squeeze position, telling Diane Sawyer a few years ago that "I've been angry all my life. I can murder inanimate objects. You should see me choking the toaster in the morning."

The actor's had his abundant share of public relations disasters in the past, but this time around, it seems a smirking sit-down with Diane Sawyer will not cut it. And the guy who strolled onto the stage at the Golden Globes last winter to Ricky Gervais' introduction that "I like a drink as much as the next man, unless the next man … is Mel Gibson" (ha ha! it's funny because of the drunk driving!) saw his winking comeback axed when he was booted from "The Hangover 2." He is not currently working on any new films and was dropped by the William Morris Agency last summer.

Say what you will about Grigorieva – and Gibson says she's "emotionally unstable" -- she still is a woman currently at the center of a bitter court case, one in which a rich, powerful man with expensive lawyers is trying to obtain sole custody of her baby. The same man who has admitted to slapping her -- which, by the way, is also known as domestic abuse. A man for whom the worst he can admit of himself is still, "I do not believe I handled the situation as well as I could have."

A quarter-century ago, Mel Gibson was the smolderingly hot star of the "Lethal Weapon" and "Mad Max" movies. He set generations of hearts aflutter with his good looks and roguish charm. At 54, he still looks pretty damn good. But there's something about a guy who smacks around a woman that's just not so appealing. The fact that he still can't acknowledge his bad behavior would be tragic if it weren't so delusionally vile. But while he may never again top the People magazine list of sexiest men in the world, Mel Gibson, you're still No. 1 in our book -- as the biggest loon in town.

Mel Gibson This Week In Crazy