How the New Jersey governor manufactures his YouTube moments 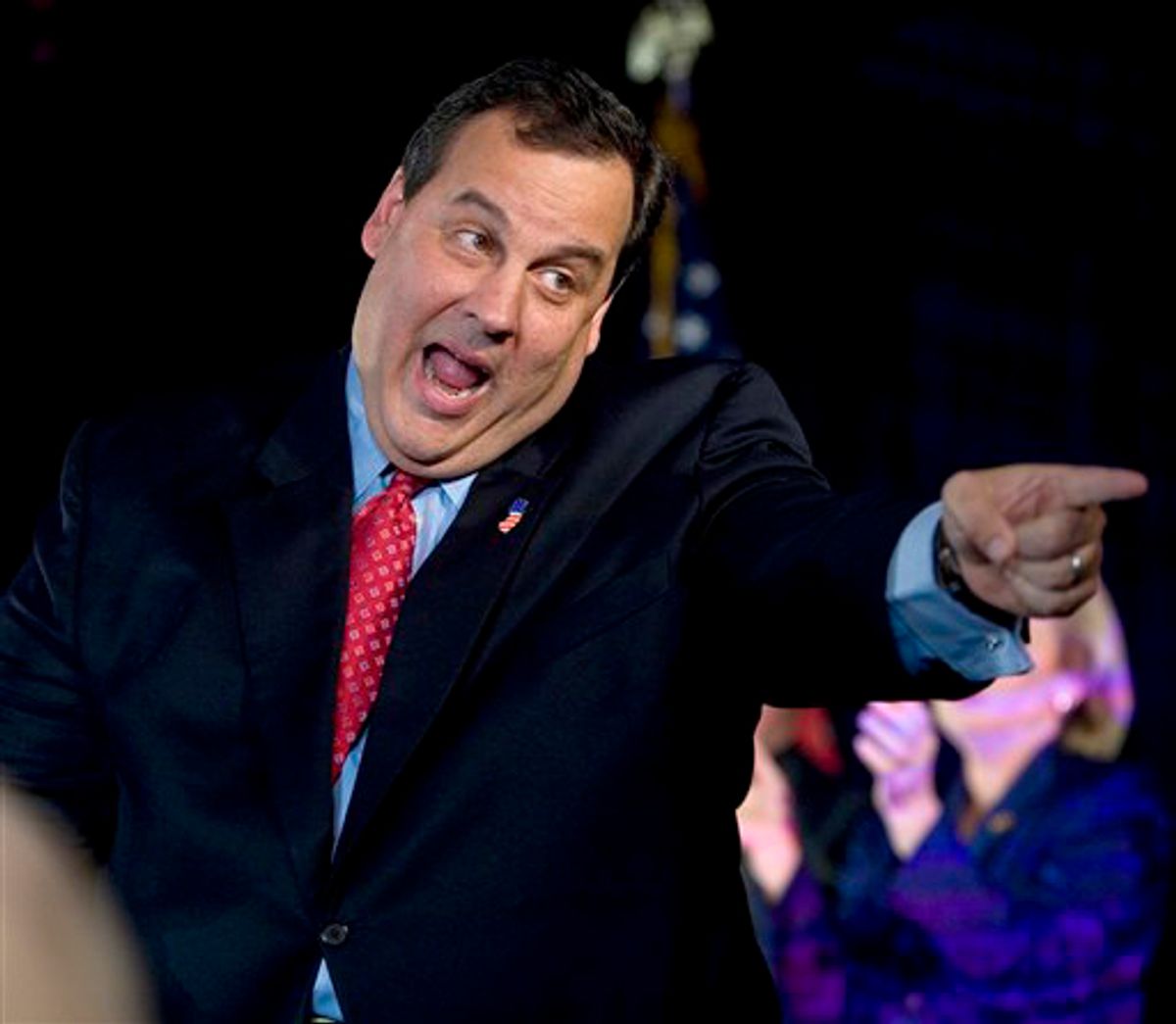 FILE - In this Nov. 3, 2009 file photo, then-New Jersey Republican Gov.-elect Chris Christie greets supporters on election night at his headquarters in Parsippany, N.J. The Republican Party was in shambles, and Barack Obama's throngs of emboldened Democrats filled the November air with chants of "Yes we can!" "Change has come to America," Obama declared in Chicago on Election Night 2008, certain that with large Democratic majorities in the House and Senate, he could deliver. (AP Photo/Christopher Barth, File) (Christopher Barth)
--

New Jersey cartoon Chris Christie has become very popular for his famous "YouTube moments," where the millionaire governor is caught on tape shouting insults at teachers and public servants. But because he is so incredibly popular among the sort of people who identify with the bullies in Very Special Episodes about bullying, it's apparently getting harder for him to craft these spontaneous moments of delightful authenticity at his public appearances.

That is not stopping him from attempting to "Go Viral" though. In this week's New York Magazine, Jason Zengerle describes the process by which these awful videos are manufactured. An aide tapes Christie's every public appearance and Christie just goes around yelling at people like Don Rickles, even when there is no one to yell at.

Now in Moorestown, Christie was hoping to create another such moment. After some introductory remarks, he opened the floor to questions. “For those of you who have seen some of my appearances on YouTube,” he cautioned, peeling off his suit jacket as he spoke, “this is when it normally happens.” Then, recognizing the man who was first in line at the microphone, Christie began to grin. “This could happen right here, ladies and gentlemen! This guy at times has the tendency to annoy me … Get ready! If you have your own cameras, start rolling!” But the man proceeded to lob Christie a softball, asking why the Legislature wouldn’t pass the governor’s education proposals. And the subsequent questions from the audience only got softer, as it seemed that everyone at the town hall was a supporter. “I want to take this moment to say two words to you, and that is thank you,” said one woman, not even bothering with a question. Christie did his best to pepper his responses with bombastic shots at his absent political opponents—“This is the crap I have to listen to,” he said of some of their criticisms—but the performance soon became like watching a prizefighter shadowbox.

Thankfully, he was saved when a black woman asked him about his decision to kill an infrastructure project because his wife didn't want to walk from Sixth Ave to Penn Station, and the footage of him yelling at this random citizen totally blew up on YouTube.