Growing up, I fought my Chinese parents to make the holiday as American as possible, but they get the last laugh 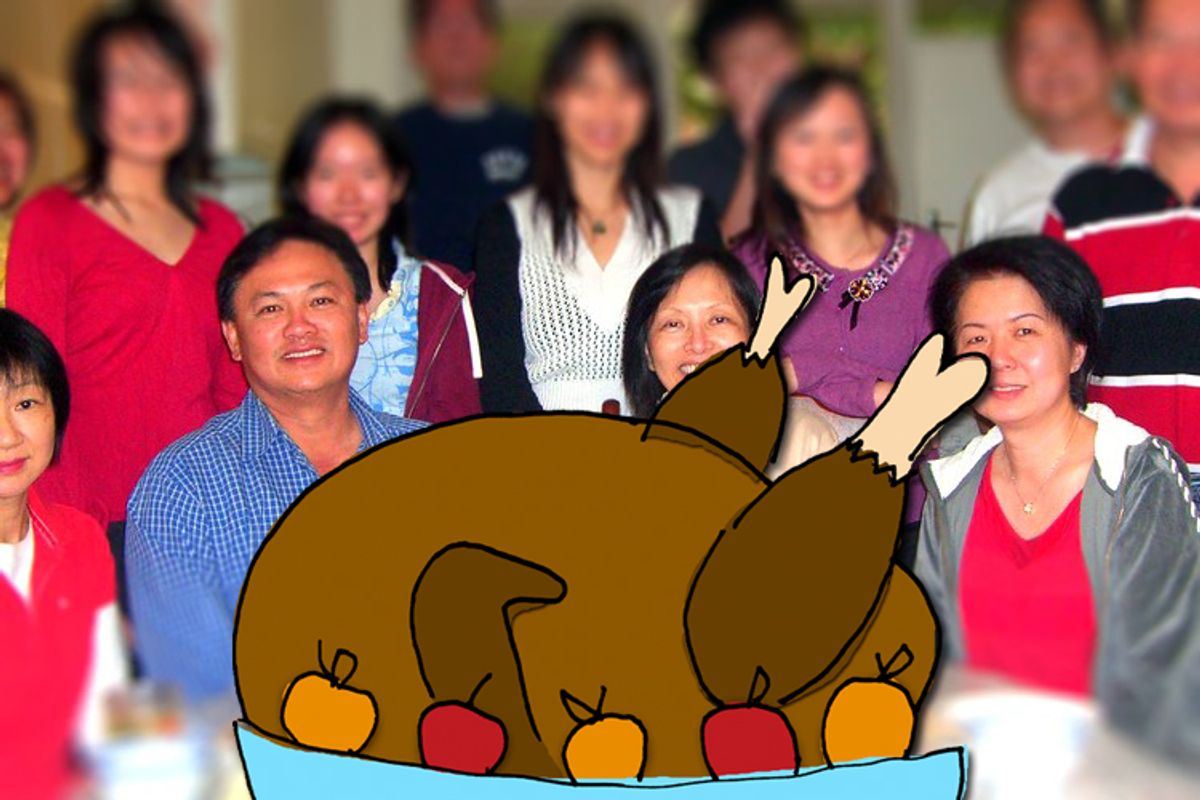 Ungrateful whining is an American child's birthright. But if you grow up in an immigrant family, you have a whole battery of things to whine about that other kids don't.

For one, your parents and their friends will insist on infesting every event with dorky, embarrassing stuff from the old country. Back in my whiny years, all my cool friends from school got to have buttery mashed potatoes and flaky little Parker House rolls at their Thanksgiving tables. And I was stuck with ... plain boiled rice.

"MO-OM! Why do we have to have RICE? I want potatoes!"

End of discussion. (This is another thing Chinese-American kids get to whine about: We never get to have the last word. Ever.)

Thanksgiving, according to my grade-school teachers, was the most American of holidays, a time to celebrate our common heritage by bonding around indigenous American foodstuffs. So I decided it was up to me, as a patriotic native-born American, to protect the sanctity of the holiday from creeping Sinofication.

"You know what Auntie Pat puts in her turkey?" Mom said one night, a week before Thanksgiving, "Naw mai and lop cheung."

Dad's eyebrows raised from behind the Wall Street Journal. "Mmm," he said.

"MO-OM! NO!" my sisters and I yelled in unison. Not that there was anything wrong with naw mai (sticky rice) and lop cheung (dried Chinese sausage), but these weren't Thanksgiving food. They were everyday boring food. The kind of stuff we ate while relatives interrogated us about our grades and asked us why Mom didn't have any sons (as if we could possibly formulate an intelligent answer to this question).

Year after year, we successfully fought off rice-stuffed turkeys and stir-fried side dishes. We also managed to increase, ever so gradually, the proportion of toasted marshmallows on top of our absolutely mandatory sweet potato casserole. And as my sisters and I assumed more and more responsibility and control in the kitchen, our Thanksgiving spreads became less Norman Rockwell and more Martha Stewart: Pumpkin flans and souffles are more our thing than pumpkin pies.

These days, we count our victory over immigrant dorkitude nearly complete. But the purity of our red-blooded Yuppie American Thanksgiving feast lasts only until the dishes are cleared. That's when our Martha Stewart idyll ends, and Mom's annual turkey jook production begins. (Jook is often described, unappetizingly, as rice porridge or gruel, but it deserves to be rebranded as a savory and soothing cream of rice soup.)

While the dishes are still in the sink, Mom puts the turkey carcass (denuded of stuffing and any pieces of meat large enough to save for sandwiches) in a slow cooker and covers it with water. She tosses in a cut-up carrot and a stalk or two of celery, (Neither of these are traditional Chinese soup ingredients, but that's how she rolls.) Then she turns the cooker on and lets it do its thing while we do the dishes and attempt to foist foil-wrapped packets of leftovers onto our guests.

The cooker stays on all night, and early on Black Friday morning, Mom removes and dumps the carcass, and adds several handfuls of leftover rice from the night before. (Yes, we still have plain boiled rice every Thanksgiving. Since almost no one touches it except Dad, we can always count on leftovers for jook-making.) Within an hour, the rice will have dissolved, turning the rich turkey broth into a silky ivory cream -- just in time for a comforting, very traditional Chinese breakfast for late risers.

In the end, that pointless bowl of Thanksgiving rice always manages to redeem itself. And we always end up with a real Chinese dish for Thanksgiving -- albeit one with an all-American backbone. And none of us have ever complained about it.

As always, Mom and Dad get the last word.

Jook is traditionally served at breakfast or as a late-night snack. It can be made with fish, meat or poultry broth, and usually contains pieces of the corresponding meat. (I've heard of jook based on plain water, but this would be unthinkable in my family.)

True confession time: I've never hosted a full-on Thanksgiving dinner, so I've have never had unfettered access to a turkey carcass. (Yes, I know -- I've missed a crucial milestone of American womanhood and should probably just go and join the Taliban right now.) But I have made jook many times, and it's dead easy. The recipe below produces a more modest portion than Mom's -- a good starter size for newbies and doubters. It calls for raw rice, since I assume most non-Chinese don't typically have cold cooked rice lying around. But you can use a larger portion of cooked rice and cook the soup for a shorter amount of time.