"Love and Other Drugs": Jake Gyllenhaal and Anne Hathaway get naked

"Love and Other Drugs" combines satire and tears in a sexy, bighearted love story 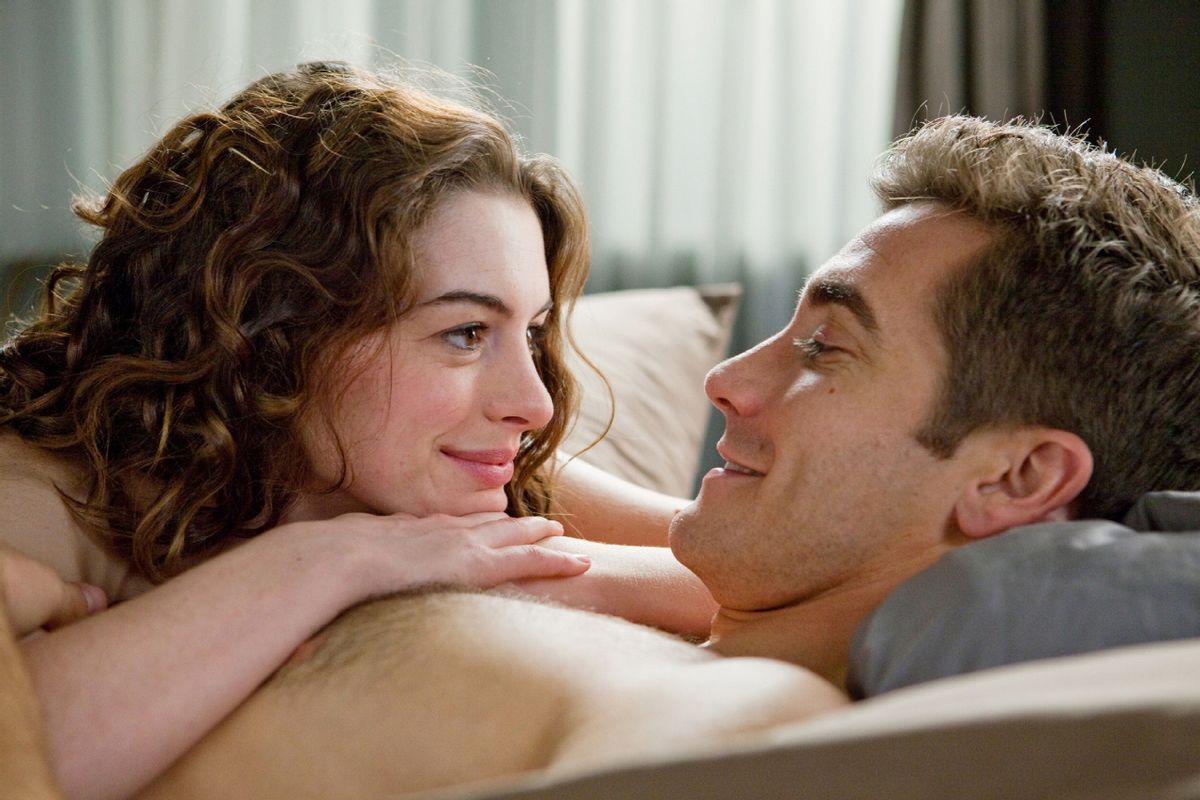 Anne Hathaway and Jake Gyllenhaal in "Love and Other Drugs"
--

Edward Zwick doesn't so much make movies and TV shows as he stuffs them, after the fashion of someone stuffing a sofa, or a turkey. Co-creator of the generationally flavored TV series "thirtysomething" and "Once and Again," and director of "Glory," "Legends of the Fall," "The Last Samurai" and a half-dozen other features, Zwick is an unabashed maximalist who tries to pack in more melodrama, more dialogue, more gags and more hit-you-over-the-head message delivery per minute than anyone else in Hollywood. See one Zwick movie and, for better or worse, you'll feel like you've seen three.

Even if we start with the premise that Zwick is the leading figure in the unfashionable but not-quite-defeated Dickensian media tradition that includes James L. Brooks and Oliver Stone, his new movie "Love and Other Drugs" is quite a mishmash of competing flavors. I mean that almost entirely in a good way. This love story stars Jake Gyllenhaal as a handsome but scurrilous pharmaceutical sales rep, circa 1996, who can't help falling in love with a woman with early-onset Parkinson's, perhaps because she is played by Anne Hathaway and is gorgeous, funny and kind of a badass.

Yes, it's a screwball romance featuring two exceptionally good-looking people and lots of nudity and it's a disease-of-the-month weeper, but we're just getting started. It's also a frequently hilarious social satire about the relationship between drug reps and doctors -- Jamie Randall, Gyllenhaal's character, winds up selling a remarkably successful pill called sildenafil citrate, and go ahead and click that link if you don't already know -- and a political diatribe about healthcare with a little Parkinson's activism thrown in and a bittersweet buddy comedy starring Oliver Platt as the older dude Jamie blows past on the road to success. There's no singing or dancing, or at least not much, and the fact that there's no fantasy karaoke number involving an '80s hit ("Girls Just Want to Have Fun"? "Everybody Wants to Rule the World"?) must mean that's too much of a shameless hack move even for Ed Zwick. Take note, world.

"Love and Other Drugs" is a preposterous mess that positively insists on not sticking together or having any clear subject, except of course the subject of guy-plus-girl, which is approximately the best subject you can have. It honestly shouldn't work at all, yet somehow on the strength of good humor and sex appeal ends up being one of the most enjoyable mainstream films of the season. Zwick and co-writers Marshall Herskovitz (his frequent collaborator) and Charles Randolph have adapted the memoir of real-life Viagra salesman Jamie Reidy, and any normal Hollywood writing team would have tried to strip the story down to essentials. But nobody's ever going to accuse Zwick of stripping anything down, and while I think his movies are hit-or-miss -- and this one's both at the same time -- there's something wonderful about that. He has prospered, at least some of the time, by assuming that there's a somewhat literate grown-up audience out there that wants a whole bunch of talking packed around its romance and action and melodrama. I'm willing to forgive him almost anything.

Mind you, when it comes to Gyllenhaal as Jamie, a fast-talking rich kid and lady-killer who drifts from selling mid-range electronics to a fast-track entry-level gig at Pfizer, there's nothing to forgive. A smoothly coiffed preppie from a doctor's family (his parents are played by George Segal and Jill Clayburgh, in what I believe is her final screen role), Jamie is much too sure of himself with girls, gear and money, but Gyllenhaal somehow stops him just short of being unforgivably odious. Maybe what we can see below the surface is what Parkinson's patient Maggie Murdock (Hathaway) also sees -- even after Jamie gets a close look at her breast under false pretenses and she responds by decking him in a parking lot. He's not a decent guy at the moment, even by the standards of antidepressant salesmen in Cleveland. But he might be a decent guy in embryo.

As for Hathaway, since at least "The Devil Wears Prada" she's been looking for an adult role that fits her combination of luminous beauty and lively intelligence, and this one might be it. Let's put the accent on "might," since Maggie is in some ways a ridiculous part, a spectacular heroine suffering from a disease so dreadful that (like the ailments in Victorian novels) it only seems to make her more lovely. She has tremors. In her fingers. Sometimes. She drinks and looks haggard, or at least what passes for haggard when you're Anne Hathaway.

Still, you can't play a beautiful-but-damaged character with half your heart, and Hathaway jumps in with no fear, making us believe in the bigness of Maggie's soul and the depth of her wounds. Jamie suits her, she keeps saying, precisely because he's a jerk and their relationship is just about sex. Famous last words, of course, and both of them know it. (I'm aware that Ivan Reitman's upcoming Ashton Kutcher-Natalie Portman movie, "No Strings Attached," involves a similar FWB-gone-wild plot. Prepare yourself for a wave of thematic essays about Hollywood's relationship to sexual reality and the decay of feminine morality.)

Let's not even pretend that we don't know how the oh-no-we-don't-love-each-other story between Maggie and Jamie will play out. There are scenes in "Love and Other Drugs" that come so close to "Say Anything" and "Jerry Maguire" that I think the movies actually intersect on a quantum, subatomic level. But Zwick isn't trying to reinvent cinema. He's trying to put on a show, one that combines steamy sex scenes and R-rated dialogue, an irresistible cast (let's mention Hank Azaria as an embittered Cleveland doctor and Gabriel Macht as Jamie's Prozac-shilling nemesis) and a huge heart. And sometimes a turkey, or a sofa, stuffed to the point of bursting is just what you want.

Love And Other Drugs Movies Our Picks