It might just be Ron Paul himself. He talks to Salon -- and it sounds like he's a little uneasy with Mitt and Sarah 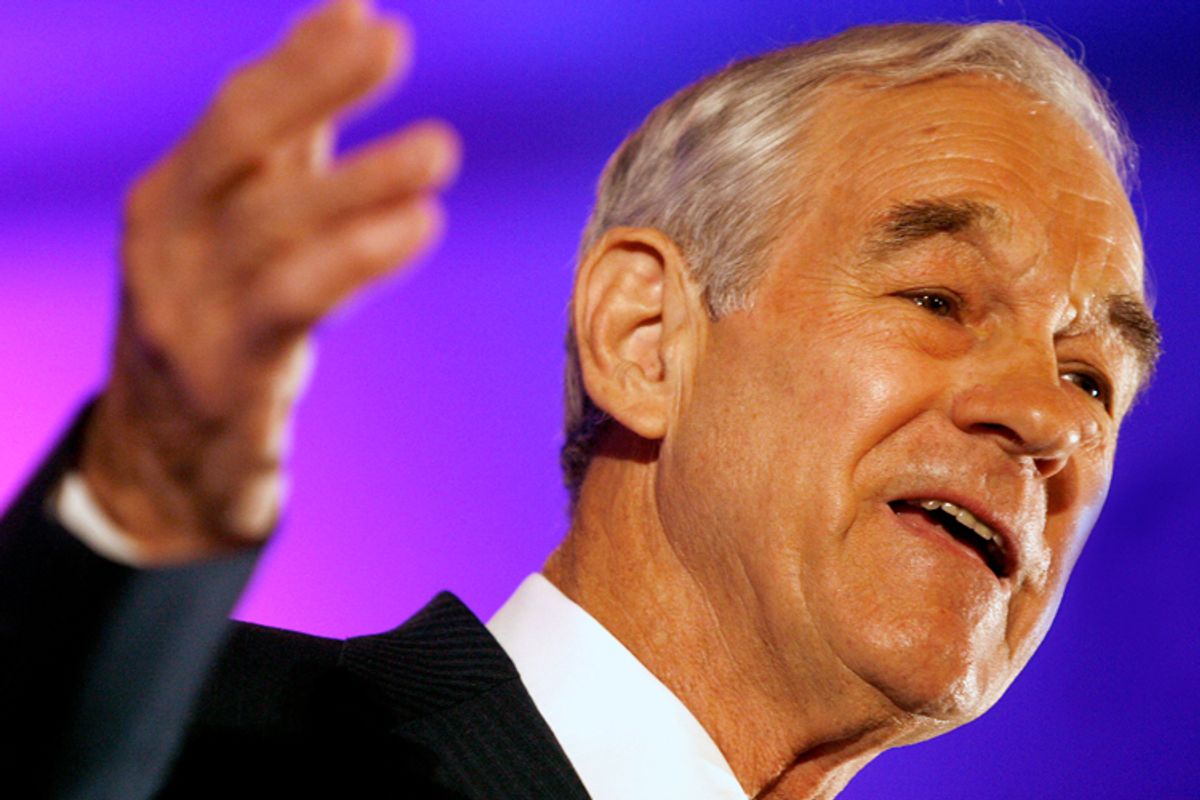 "People ask me if I think about it, and I do," Ron Paul says, talking about the possibility of making another presidential run in 2012. "I haven’t decided. It is going to be several months before I need to, or expect to, make a decision like that."

As he mulls his options, the 75-year-old Texas congressman finds himself -- not for the first time -- in a peculiar situation. Last time out, in 2008, his campaign was roundly mocked by media commentators and Beltway insiders, but in the end he bested several supposedly more serious candidates, notably erstwhile New York City Mayor Rudy Giuliani and former Tennessee Senator Fred Thompson.

Admittedly, Paul was never within reach of capturing the GOP nomination -- but he also proved himself to be much more than a punchline to the pundits' jokes. He racked up ten second-place finishes (it helped that he refused to drop out even after every other aspirant had conceded to John McCain) and seventeen third-places in primary contests, and his campaign raised more than $30 million, powered by fierce grassroots enthusiasm.

Of his '12 calculations, Paul says, "There could be some personal factors that I would take into consideration -- family things. There will be the exact condition of what’s happening in the financial markets, whether I think people will continue to be interested in the Fed and whether we can excite people about ending our foreign policy.

"If I still think [my support] would be only three or four percent, that would be one thing. But I think our numbers our growing, so I’ll just have to assess it next year."

A decision, he adds, will come "by spring."

The political landscape, which has become markedly more hospitable to Paul's libertarian brand of Republicanism in the last two years, probably makes the idea of another run tempting. Paul's ultra-skeptical view of the Federal Reserve was, in 2008, cited as axiomatic evidence of his kookiness. Now, mainstream unease about the Fed appears to be building, most recently finding expression after Ben Bernanke’s decision to launch a $600 billion bond-purchase plan earlier this month. Even Mitch McConnell and John Boehner wrote to the Fed chairman to express their "deep concerns" about his move.

Paul has other winds at his back, too. The Tea Party is, to be sure, something of a ragbag grouping. But it has done much to popularize the fiscal conservatism and literalist reading of the Constitution that Paul favors. Add to this a host of more generalized concerns -- from the spiraling deficit to unease over the continuing war in Afghanistan -- and it is easy to see why Paul might believe that 2012 presents an ideal opportunity to improve on his 2008 showing.

The question, though, is whether he is best placed to take advantage of the moment. Even some who are sympathetic to the congressman wonder if a man who will be 77 on Election Day 2012 is really up to the rigors of a national campaign. "If I didn’t think that, I surely wouldn’t do it," is how Paul addresses the age question. (The oldest serious non-incumbent candidate for a major party nomination in the modern era was Bob Dole, who turned 73 a few weeks before officially claiming the Republican nod in 1996.)

There is also the question of his public persona. Those 2008 achievements were certainly prodigious. But Paul can still come across as somewhat obsessive, especially about esoteric elements of monetary and fiscal policy. With his pixie-like appearance and palpable disinclination to package his message into TV soundbites, he does not exactly scream "populist appeal."

There is, of course, an obvious heir to his mantle: his son, Rand, now the senator-elect from Kentucky. Rand has his own weaknesses -- it will be a long time before his contortions over the 1964 Civil Rights Act are forgotten -- but as his surprisingly polished performance in a series of debates this fall demonstrated, he's better suited than his father to the modern age. But Rand Paul has given no indication that he'd consider a presidential bid as early as '12. And Ron Paul scoffs when asked whether he would encourage his son down that path.

"Oh!," he says with a flash of impatience. "I think that would be really premature for me to even volunteer anything like that. He hasn’t even been sworn-in yet."

(Attempts by Salon to secure an interview with Rand Paul for this article were unsuccessful.)

The libertarian ranks are not exactly swollen with credible national candidates, so if both Pauls decline to run, the spotlight might then fall on Gary Johnson, the former New Mexico governor who is widely assumed to be toying with a bid for the GOP nod, but he cannot explicitly confirm this because of the laws that surround the type of political committee he heads. (Johnson's official role is as honorary chairman of the Our America Initiative, a 501 (c) (4) organization which cannot promote a current candidate for federal office.)

Johnson, who was profiled in Salon earlier this year, has in recent weeks been attracting the attention of everyone from the Daily Caller to The New Republic, and has even drawn transatlantic praise from Britain’s Spectator. As a popular two-term governor of a swing state, he can claim a measure of credibility and electability that is otherwise in rather short supply among Republicans of his ideological hue.

His admirers also include Ron Paul himself:

"We are friends and I think our views are very close together," Paul says of Johnson. "I would think that both of us are interest in promoting our cause and not in any way attacking each other."

Is Johnson, hypothetically, a candidate whom Paul could support if he did not run himself in 2012?

"I think, hypothetically, that is the case," comes the cautious answer.

The admiration runs both ways. When it comes to libertarian issues, Johnson says, "I think Ron Paul has done a terrific job raising awareness in this country."

While Johnson’s admiration for Paul appears genuine, one doesn't have to read very deeply between the lines to see that he also harbors some misgivings about Paul’s capacity to build on his 2008 foundation. Asked whether he considers it fair that Paul got labeled as a fringe candidate in 2008, he replies: "I haven’t been labeled that way and I hope I don’t get labeled as some sort of fringe candidate. Fair or unfair, Ron Paul got labeled that way."

Johnson also argues that there may be a subtle difference between the two men when it comes to military matters.

"Ron Paul, I think, really got labeled as a non-interventionist. And I would not apply that label to myself," he says. "Although I believe we should be out of Iraq and Afghanistan and we should be looking at significant reductions in defense spending, I would say that we should be very vigilant as to national defense."

Asked whether he would be more effective as an advocate for the libertarian cause than Paul, Johnson’s answer is ostensibly modest -- but also meaningful:

"I'd rather not say that I am going to be more effective at it. But for somebody to go further than Ron Paul has gone, they are going to have to do just that."

Johnson clearly believes that the libertarian constituency can be expanded in 2012. He insists that "the voice of the Republican Party is up for grabs" and asserts that the 2012 race is "absolutely wide open."

Still, both he and Paul are willing to acknowledge that, in many way they remain out of step with their fellow Republicans. Paul dryly notes that his message "appeals to liberals and independents and libertarians and constitutionalists -- but not necessarily, you know, the conventional Republican Party member."

Johnson, asked how someone like him or Paul could compete against a candidate with the money of Mitt Romney or the celebrity of Sarah Palin, chuckles.

"Well, yeah!," he says with exaggerated emphasis. "What your question pointed out is the impossible. How could that possibly happen?"

Johnson remains a happy warrior. Of Romney or Palin, about all he'll say is that they are "very strong" overall as candidates and that "I think we could all sit down and agree what the weaknesses might be."

Ron Paul, as befits a man who has spent much of his life struggling against the Republican establishment, delivers a rather more damning verdict. Asked what he would think if Romney ultimately become the nominee, Paul pauses and sighs.

"Well, it depends on whether he changes his viewpoints on some issues," he says. "He instituted a government-mandated [healthcare] program in Massachusetts, which didn’t please me. If he wants to do the same thing nationally, that would be a problem to me."

And how would he feel about a Sarah Palin candidacy?

"I don’t think [I would feel] a lot different from many other Republicans," he finally says, and begins to laugh.

Could he expand upon that a little.