How "The Sims" turned me into a home wrecker

I was single and almost 30 when I first found the man of my dreams. Too bad he was a computer game character 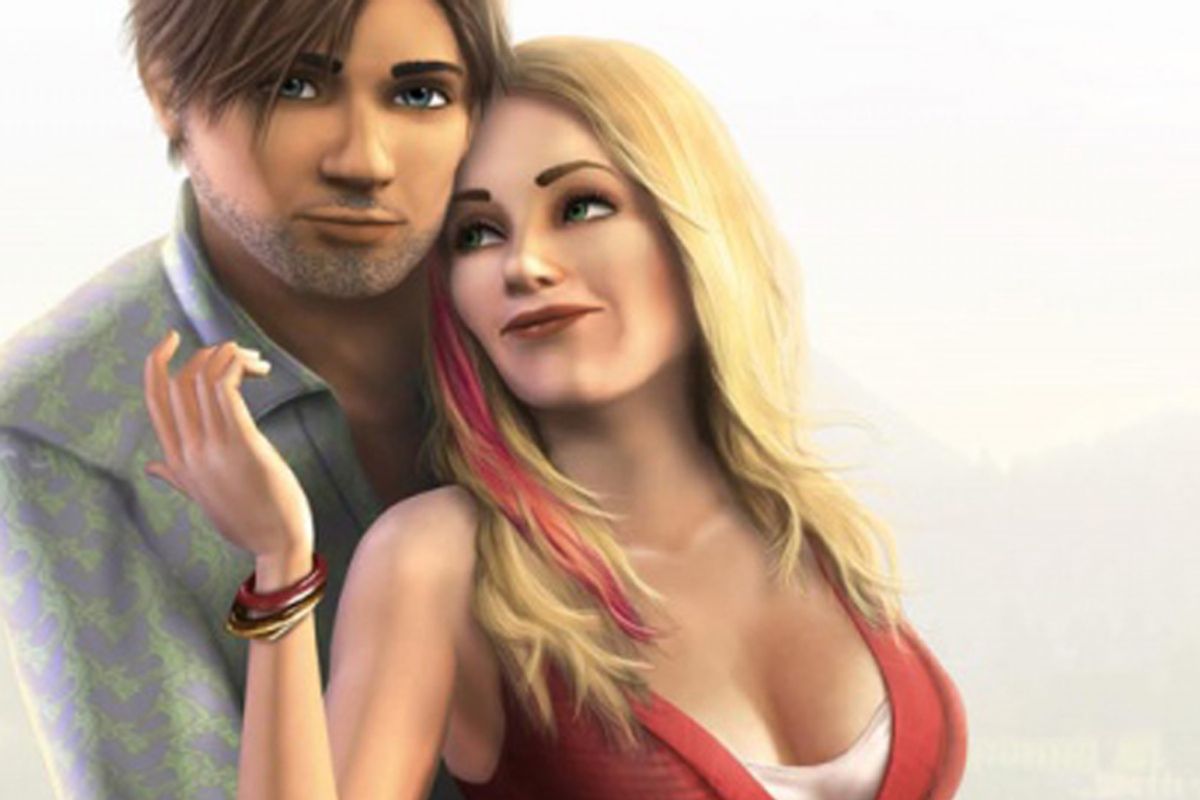 One month before my 30th birthday, a well-meaning aunt cornered me at a family function.

"Have you found anyone special yet?"

I smiled defensively and informed her that I hadn't. Not yet, anyway.

"So you haven't caught the eye of anyone at all?" Her playful, teasing tones did little to conceal a telltale note of pity. When this woman was my age, she already had 2.5 children.

I was tempted to tell her the complete and unabridged history of my romantic disappointments. All of the it-was-fun-but-I'm-not-really-readies and the almost-but-not-quites and the you're-really-great-can-we-still-be-friends and especially the I'm-in-love-with-someone-elses. I've had every plotline except the one I always dreamed I'd have. Wriggling away from concerned relatives at gatherings had become fairly easy to me, but nearing that milestone birthday, I could not escape my own mounting, internal panic. My friends were getting engaged, getting married, getting pregnant. I was sitting at home, eating Mini-Wheats for dinner (again) and streaming episodes of "Jersey Shore" on YouTube.

In journalism, typing -30- at the end of a piece means that it is over.

When I was younger, I figured I'd have everything together by 30. I would have a stable and rewarding career. A partner I loved and trusted. A quaint little bungalow on a tree-lined street. Maybe even a child. But here I was, rounding the corner to the big three-oh and none of these things were even a blip on the horizon. Sometimes, even finding a matching pair of socks to wear in the morning was a small personal triumph. At 29 and 11/12ths, I felt like less of a grown-up than I did at 25 -- the last time I actually had dental insurance.

There was nothing I could do to slow down time. So, in an effort to distract myself from the dreaded birthday countdown, I picked up a habit I hadn't dabbled in for years.

I started to play video games.

I hadn't been interested in video games since I was a teenager, but I have always understood the vicarious joys that others get from the pastime. You're a military sergeant without the mortal danger. A ninja without the physical prowess. A secret agent. A skilled assassin. A prince of Persia. But I wasn't interested in throttling entire armies to death with my bare hands. My fantasies figured more along the lines of a decent man, solidly built furniture and premium cable.

I downloaded "The Sims 3" for iPhone.

If you've never played this enchanting little game, it's basically Life: Version 2.0. -- a simulator that allows you to go through the minutiae of everyday life using an avatar. Sound boring? Then you've never played it. With a few taps and a literal wave of the finger, "The Sims 3" for iPhone allowed me to build an enviable career, renovate my home, buy a car, maintain a thriving vegetable garden and secure an actual committed relationship. Magic. Longing to have those grown-up things that always manage to elude you? There's an app for that.

It is impossible to overstate how astonishingly easily my dream life came to me, how addictively its rewards added up. At the beginning of the game, for instance, I was given a charming little house in a nice neighborhood. Given! It was handed to me! I didn't have to scrimp or save or deal with real estate agents or even apply for a mortgage! Landing a terrific job was as easy as showing up to the town hall in a pair of tight leather pants. I told my boss a couple of jokes and was instantly rewarded with a promotion and a healthy raise. In real life, my neglected tomatoes wither on the vine, despite my best intentions. In the game, I harvested huge, succulent crops after watering them no more than twice. I became a master angler and a gourmet cook, whipping up red snapper and catfish gumbo as if I were the secret love child of Nigella Lawson and Bobby Flay. Everything was easy.

And then I met Walter.

Walter lived alone in a big lovely house on the edge of town. He was the immediate neighbor of my best friend, Jill, and her intolerable husband, Jack. Walter was significantly older than me and a touch neurotic, but he laughed at my jokes and was an excellent conversationalist. We were just friends -- until we weren't. He moved in almost immediately.

It's worth noting that Walter was not an avatar controlled by another human being. This wasn't some real guy sitting at his computer on the other side of the country, unlike the complex and sometimes erotic online relationships that develop in "World of Warcraft" and other multiplayer role-playing games. All of the characters in the app are automated. Walter existed as an automaton, our virtual romance not extending beyond the sphere of my own making. At first, life with my simulated husband was lovely. Then it became comfortable. Eventually, it became dull and routine. I started to resent how often Walter hogged the shower or how he always managed to get underfoot whenever I was trying to read or tend the garden. He never shopped for groceries. He never cooked. One day, we ran out of things to talk about.

I renovated our home and rearranged our living room furniture in a desperate bid to gloss over the cracks that had emerged in our marriage. I needed a bit of distraction from my distraction.

And then I met Bernie.

Bernie had dark hair and wore these cheap polyester suits that made him look like a hotel lounge singer from the 1950s. I don't recall exactly what drew me to him, aside from the fact that he wasn't Walter.

Walter and I divorced. And just as deftly as Betty replaced Don Draper with Henry Francis on "Mad Men," I had swapped out Walter for Bernie.

Bernie and I got married as a matter of course. It just seemed like the thing to do.

Once I started to get to know my new husband, however, I knew that I had made a mistake. He was lazy. Selfish. Mean-spirited. Walter and I would often have heart-to-heart talks in the middle of the night. Whenever I tried to initiate Bernie in such tendresse, he snored away.

I started to miss Walter. Kind, loyal, simple Walter! He had never once turned his back on me. What had I done? After much soul-searching, I knocked on Walter's door one night. I did some frantic damage control and we rekindled our lost friendship. And then some. (Oh, Walter! How foolish I've been! )

Bernie and I morphed from loving spouses into stoic roommates. I barely looked up from my book when he came home from work. I cooked only minestrone soup and only for myself. Some nights, I didn't even bother coming home.

I bought a new kitchen table, a fun coffee machine and a brand-new car. I renovated the house again. After an argument culminating in a dramatic slap across the face (my hand, his face), I ordered Bernie to get the hell out of my house.

I was lucky to have so many people around to help me through my second virtual divorce. Jack, my best friend's husband, suddenly became much less intolerable in my time of need. He offered more, uh, comforts than most.

I know what you're thinking: You virtual home-wrecker! You pixelated whore! Why can't you keep your animated hands to yourself?

In my defense, it's just a game. Adultery and betrayal are not how I roll in real life. Just as the overwhelming majority of people who relish blood-spattered first-person shooter games could never imagine killing an actual person in cold blood, I could never imagine creating needless drama and emotional turmoil in my real life. I am not someone who jumps from man to man out of sheer boredom, nor would I even entertain the notion of bedding a friend's husband. But things were very different in this alternate universe; it was not unlike lucid dreaming. Here, I could build up relationships and unceremoniously tear them down without leaving devastation in my wake. Here, I could treat men as disposable and/or interchangeable -- the way I have sometimes been treated in my actual life -- without hurting anyone or losing shards of self-respect.

After my third Sim marriage ended, my little virtual house seemed different to me, somehow. It felt light and airy and all mine. I took naps whenever I wanted to take naps, cooked whatever I felt like cooking and blissfully read my Sunday afternoons away. I watched stand-up comedy instead of police dramas. I took long baths and longer drives. I went fishing at the crack of dawn. I visited with friends whenever I felt like it (and slept on their couches, if it got too late.) I made grilled cheese for breakfast, lunch and dinner.

I did whatever I felt like doing. I answered to no one except myself. I was single again. And everything was easy.

Sofi Papamarko is a freelance writer who lives in Toronto. Her blog, www.sexytypewriter.com, documents her spectacular failures in dating and being a grown-up.