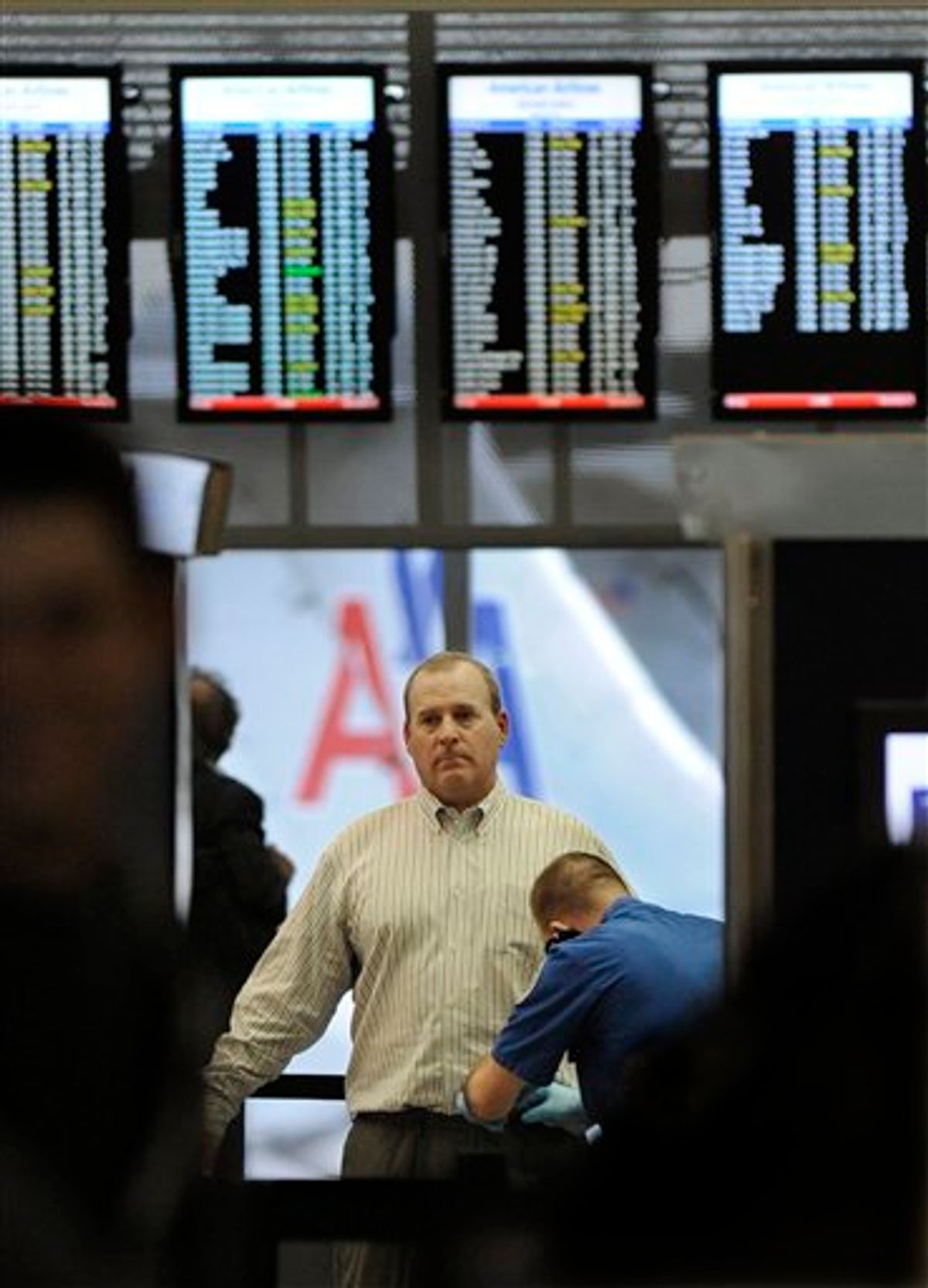 An airline passenger is patted down by a TSA agent at O'Hare International Airport in Chicago, Monday, Nov. 22, 2010. There are new requirements at some U.S. airports that air passengers must pass through full-body scanners that produce a virtually naked image. Those who refuse to go through the scanners are subject to thorough pat-down. (AP Photo/Paul Beaty) (AP)
--

The public fury over the new TSA airport security measures intensified this week, with harrowing stories of a breast cancer survivor forced to show her prosthetic breast and a male passenger whose urostomy bag leaked urine all over him when it was roughly manhandled by airport agents during a "patdown."  So what does the Federal Government do to address this growing public anger?  That's easy: the playbook is well established:

White House: Terrorists Have Discussed Use of Prosthetics to Conceal Explosives

U.S. intelligence has picked up terrorists discussing the use of prosthetic or medical devices to conceal explosives, sources tell ABC News.

The revelation about the intelligence, which is not new but relevant to debate over new security measures at airports, comes as the White House today acknowledged that the implementation of the security procedures has not gone perfectly.

This is the all-justifying, cure-all solution for every problem: government officials run to the nearest media outlet they can find and anonymously scream "TERRORISM."  No evidence is needed; the anonymity precludes all accountability; fear levels are quickly ratcheted up; and everything the Government wants to do then becomes justifiable in its name.  That's the frightened, authoritarian society we've allowed ourselves to become.  Speaking of journalists who dutifully disseminate whatever fear-mongering claims their anonymous government friends tell them to write . . . .

The New York Daily News today excitedly trumpets the debut appearance of . . . . The Next Anwar al-Awalki:

The NYPD intelligence division, CIA and FBI are concerned Sheikh Abdullah el-Faisal is becoming a new Anwar al-Awlaki, the Yemeni Al Qaeda cleric who went from preaching to plotting.

"El-Faisal is focused on propaganda," one U.S. counterterror official in Washington told the Daily News. "But the last few years, he's dabbled in operational things like recruitment and facilitation."

"His reach goes far beyond Jamaica," the U.S. official said. "He's trying to expand his network in Africa and Asia". . . .El-Faisal is charismatic like Awlaki, but "willing to say things that would make even Awlaki turn pale," said terror expert Evan Kohlmann.

For those of you who support Obama's assassination program aimed at Awlaki: what do you think?  Have we read enough anonymous government claims in the newspaper yet about how el-Faisal "has dabbled in operational things like recruitment and facilitation" to cheer for his eradication, or do we still need a couple more articles like this one anonymously accusing him of being a Real Terrorist?  Maybe we need Leon Panetta going on the TV to decree that he's guilty in order to really persuade us, followed by a couple of incriminating Wikipedia entries, and then the President is good to go: drones away?  That's how we now determine guilt, isn't it?

Note that the government official to whom these intrepid, adversarial reporters gave anonymity accused the new Awlaki of being guilty of exactly that which has been repeatedly been blamed on the Old Awlaki: "He also inspired Times Square bomber Faisal Shahzad and failed airplane underwear bomber Farouk Abdulmutallab."  Maybe that can just be the all-purpose accusation which justifies a whole litany of assassinations: anytime we want to kill someone, we just have a government official anonymously claim in the newspaper that he inspired the Undewear Bomber and Fort Hood Shooter.  After all, there's no limit on how many people can "inspire" someone.

All of this underscores the ambivalence I've had in watching the TSA controversy unfold.  In one sense, this has all the ingredients of the last decade's worth of Terrorism exploitation: fear-based increases in pointless though invasive government power, surveillance and privacy infringements; further training the citizenry to mindlessly and meekly submit to directives from government functionaries; and, most of all, sleazy Washington influence-peddlers who spend time in Government ratcheting up fear levels and then return to the private sector to profit from that fear (Michael McConnell is the poster child for that behavior, but in this case, it's Michael Chertoff).  As a result, my first reaction was that the public backlash could be productive in finally drawing a line the citizenry will not permit the Government to cross with these manipulative tactics.

But I now believe that optimism was unwarranted.  That's because there's no real principle being vindicated here: with a few noble exceptions, it's all just deceitful posturing.

In one corner we have the American Right, magically re-discovering their alleged belief in privacy and government restraint now that they see an opportunity to politically harm Obama by waving that flag once again.  These, of course, are the very same people who spent the last decade cheering on every radical expansion of unchecked government authority and privacy destruction when it was their Party doing it -- ones far, far worse than these airport screening measures -- and who will undoubtedly do exactly the same thing the next time a Republican occupies the White House.

I have no doubt -- none -- that if there were a Republican President in office now, these very same people would not only be defending the TSA in the name of Staying Safe, but maligning critics as Privacy Fetishists, Civil Liberties Extremists, and Friends of The Terrorists.  Nobody has less credibility to march under a privacy and civil liberties banner than that right-wing faction (and see Darren Hutchinson on just some of the out-of-control government powers they cheer on domestically).  And that's to say nothing of their real agenda: to privatize airport security, the way our prison system has been -- as though having Blackwater or the Paragon of American Authoritarianism, Rudy Giuliani, take over from the TSA will preserve our liberties and privacy.

In the other corner, we have the Democrats, who -- in perfect unison -- would be screaming bloody murder about these methods and waving the Flag of Civil Liberties if George W. Bush were still President, as they would smell partisan advantage from doing so.  But since it's Barack Obama who is President, they are -- with a few exceptions -- meekly raising concerns, though more often acquiescent to the TSA when they aren't outright supportive.

And then we have the indignant, put-upon American People. They're not angry that the Government had adopted inexcusably invasive and irrational security measures.  They're just angry that, this time, it's being directed at them -- rather than those dark, exotic, foreign-seeming Muslims who deserve it, including their own fellow citizens.  And if there were a successful bombing plot against a passenger jet, many of those most vocally objecting now would be leading the way in attacking the Government for not having kept them Safe, and would be demanding even more invasive measures -- just directed at those Other People, the Bad Dark People over there.  Eugene Robinson is exactly right when he wrote today in The Washington Post:

What the critics really mean is not that the TSA should let underwear bombers board planes. What they're saying is: Don't search me, and don't search my grandmother. Just search the potential terrorists.

In other words, they want profiling. That's a seductive idea, I suppose, if you don't spend a lot of time worrying about civil liberties. But it couldn't possibly work. Our terrorist enemies may be evil, but they're not stupid.

This isn't to say that there aren't legitimate, principled objections to the TSA's policy across the political spectrum; there are.  And there have been genuinely heroic, principled protests, such as the one which galvanized much of this controversy by John "Don't Touch My Junk" Tyner (who, it turns out, unsurprisingly I suppose, is a regular reader here).  I wish there were a genuine unified uprising on the part of Left, Right and everyone else to draw an inviolable line, to declare that not everything is justifiable in the name of fear and Absolute Safety, which are age-old manipulated concepts, against which other competing values must be weighed.  Such an uprising is long, long overdue.

But the American Public, on the whole, is perfectly content with increasingly invasive government surveillance.  They've proven that they will submit to virtually anything before the scary specter of Terrorism: putting people in cages for life without charges, torturing innocent people, invading and destroying other nations that haven't attacked us, assassination hit lists free of due process, to say nothing of the merciless domestic Prison State that eats up the lives of millions of their fellow citizens for no good reason, fills them with Taser-delivering electric shock at will, and degrades their communities and basic liberties with a deliberately endless and corrosive Drug War -- almost all of which has a disproportionate impact on minorities.  Indeed, polls show that, despite all the uproar and horror stories thus far, majorities in America are still supportive of these TSA procedures (though the trend is toward rising opposition).

I still would like to believe that what can change public thinking on such matters is having these measures finally start burdening a majority of Americans, rather than being confined to isolated, marginalized, demonized minorities.  Human beings are self-interested, and unfortunate though it may be, it's a fact of life that it's difficult (though not impossible) to induce widespread public passion over injustices that aren't affecting most people.  If the growing anger over these TSA invasions helps change -- or least moderate -- how Americans think about Fear of Terrorism and Privacy as competing values, then at least some good will come of it.  But it seems more likely that Americans will be just as supportive of future expansions of government power just as long as the Right People are targeted.

UPDATE: Firedoglake has produced an excellent document advising passengers of the risks of airport screening procedures and their rights vis-a-vis the TSA.  It's in .pdf form and anyone can print it out -- either for themselves or to distribute at airports.