The "Burlesque" star has constantly been overshadowed by other pop stars. Will that ever change? 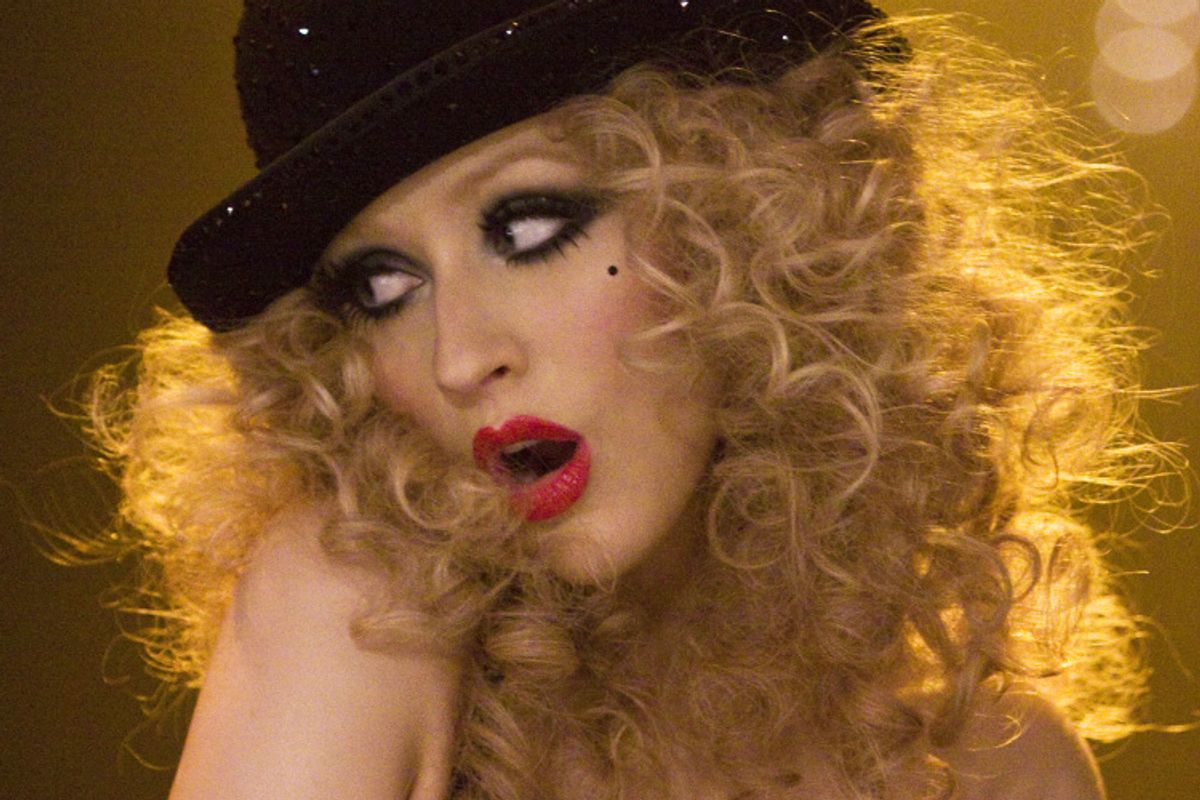 Christina Aguilera has a career that any aspiring pop star would kill for. She's been in showbiz since childhood, when she starred on "The Mickey Mouse Club." She had her first hit at age 19, and her 2002 self-affirmation anthem "Beautiful" comes preinstalled on every teen girl empowerment mix. And yet, the story of Christina might best be summed up by her performance with Britney Spears and Madonna at the 2003 MTV Video Music Awards, better known at That Time Madonna Kissed Britney. A moment later, Madonna macked on Christina, too, but who remembers that?

Grammy-winning, chart-topping Christina Aguilera, you always seem to find yourself overshadowed by the bigger, flashier dame next to you. In "Burlesque," which arrives in theaters this week, Aguilera plays aspiring showgirl Ali Rose, who, based on the trailer, appears to be the less-trashy, more rhythmic heir to Noni Malone's gold-plated stripper pole. She's the centerpiece of the story, the heart, soul and booty of the film. And yet -- OMG CHER!

This whole problem all started back on "The Mickey Mouse Club," when she was getting her Disney on with fellow stars Ryan Gosling, Justin Timberlake -- and Britney Spears. Despite the fact that Spears has never held a candle to Aguilera in the carrying-a-tune department, her wattage has always burned more brightly. The two have been pitted against each other their entire careers -- they're both, after all, blondes with their own fragrances. But Spears, she of the breakdowns and hasty marriages, got a star on the Hollywood Walk of Fame in 2003. Aguilera had to wait till this November for hers.

In recent years, Aguilera has endeavored to zig where others have zagged, releasing the retro-themed "Back to Basics" in 2006, laying low and taking care of son Max, born in 2008. But there's also another problem: Where once there was only Britney to be compared to, there are now even more players on the pop princess field. She's not the "Dirrty" girl of her earlier years, so Ke$ha can take that share of the market. She's not the badass dance rock star -- Pink's owned that one for years. And then there's the unstoppable force known as Gaga.

In June, Aguilera released her first studio album since 2006, "Bionic," a shiny, robotic star-packed and produced collection of songs that might, three years earlier, have sounded ambitious. In 2010, it sounded like a desperate imitation of the biggest star in pop. And the latexed and lipsticked video for "Not Myself Tonight" was so Gagaesque, the Lady could have sued for copyright infringement. Now, with "Burlesque," she seems set to follow in Cher's incredibly glittery diva footsteps.

She's beautiful. She acts. She dances. And she has one hell of a rocking set of pipes. In lots of ways, she's head and shoulders over the Katy Perrys and Rihannas and Fergies of the world, whose vocal shenanigans wear mighty thin if you happen to hear more than one of their hits in row. (That's usually when I reach for the Cuervo.) And yet somehow she always seems to come in second place to all of them.

It's hard not wonder if, with a little bit better timing, Xtina wouldn't just be a star, she'd be a superstar. Then again, who needs to be No. 1 all the time? She's already been in the business almost 20 years and she's still standing, cranking out new material and trying new things. And even when she's not on top, she's utterly unstoppable. Which is why, even though she's a little bit Britney and a little bit Gaga, she's also a lot like another swaggery, tenacious sex symbol. Christina Aguilera, has anybody told you how much you remind us of Keith Richards?