He'd like to be taken seriously as a public intellectual. He got the public part right 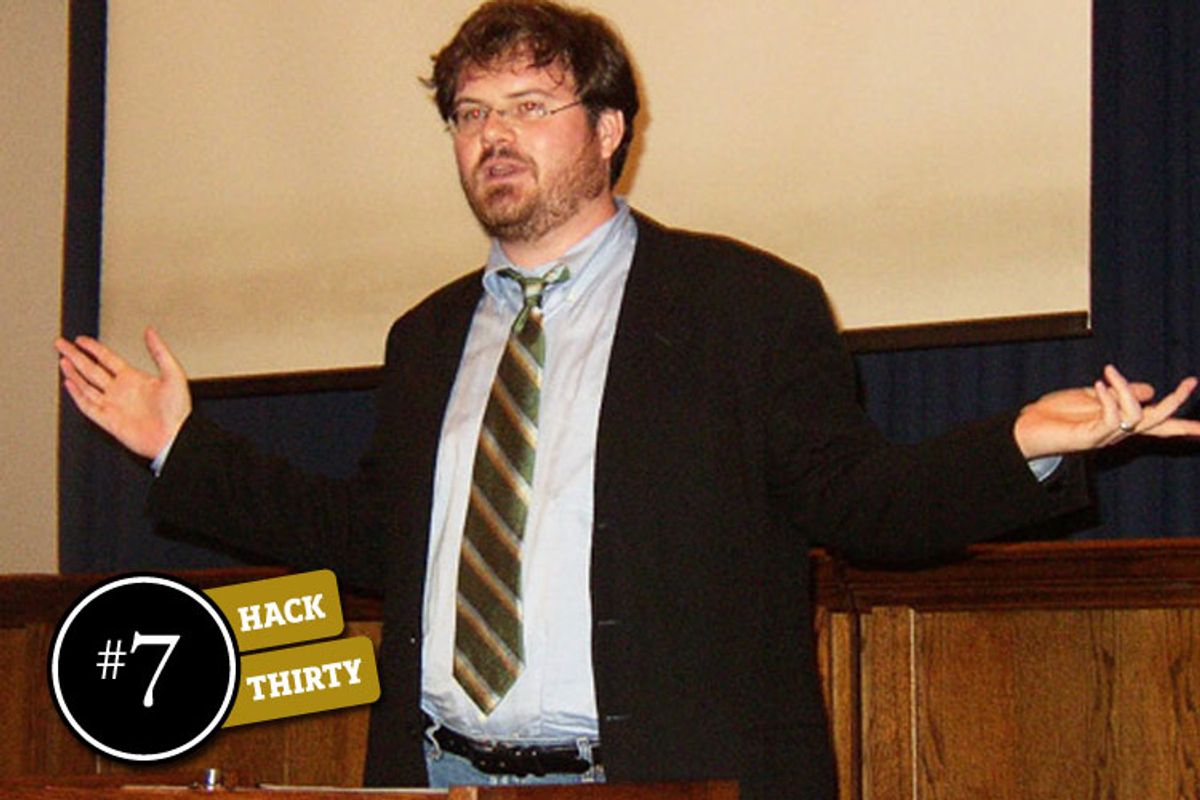 Jonah Goldberg writes the political column equivalent of weekly fart jokes, but longs to be taken seriously as a public intellectual. He has a job solely because his repellent mother took credit for inspiring Linda Tripp to secretly record private conversations with Monica Lewinsky. In 1998, in the midst of a terribly boring career producing PBS documentaries and local television, young Jonah somehow managed to get a plum gig at the National Review, the leading journal of conservative opinion.

It was at the National Review Online that he honed his dreadfully imitable style: He is an eternal college freshman, both in terms of intellectual pretensions and cultural references. He skimmed the assigned reading but writes like an expert on Schopenhauer. (Also, there are "Simpsons" jokes.)

Goldberg favorite rhetorical move is to pretend that he's making some grand, semi-controversial point, then back off when asked to defend it. He wrote an entire book called "Liberal Fascism," about how liberals are the real fascists, but constantly insists that the theme of his book was not "liberals are fascists." He wrote a column about how Julian Assange should be assassinated, but insisted that the point of his column was not to say that Julian Assange should be assassinated. Did you know that proposing that kids perform community service 'is modern slavery?!? ("No, national service isn't slavery," he eventually writes, before saying, again, that it's basically the same thing.)

That tic aside, Goldberg's at his most plainly repulsive when he's just jokin' around.

While he is the National Review's second-dumbest contributor, he is that publication's finest example of how far a name -- unattached to anything resembling an intellect -- can take you in the parallel conservative press. If the name were also attached to an attractive woman, he'd probably have his own show by now. It'd be called "No, You Completely Misunderstood My Point, With Janice Goldberg," and he could end each hour by claiming he never actually said what he said at the top of the show.

In today's syndicated column I trot out the cliche that "hindsight's always crystal clear." Several readers have already reminded me that I wrote a column arguing exactly the opposite in June of 2002. This is the danger of cliches. I was trying to make a general point which everyone understands but also ended up communicating an even more general falsehood. Like saying violence never solves anything, people understand what I mean even when in reality what I'm saying isn't true.