Pick of the week: The actor shines as George VI in "The King's Speech" -- a surprising tale about fading empire 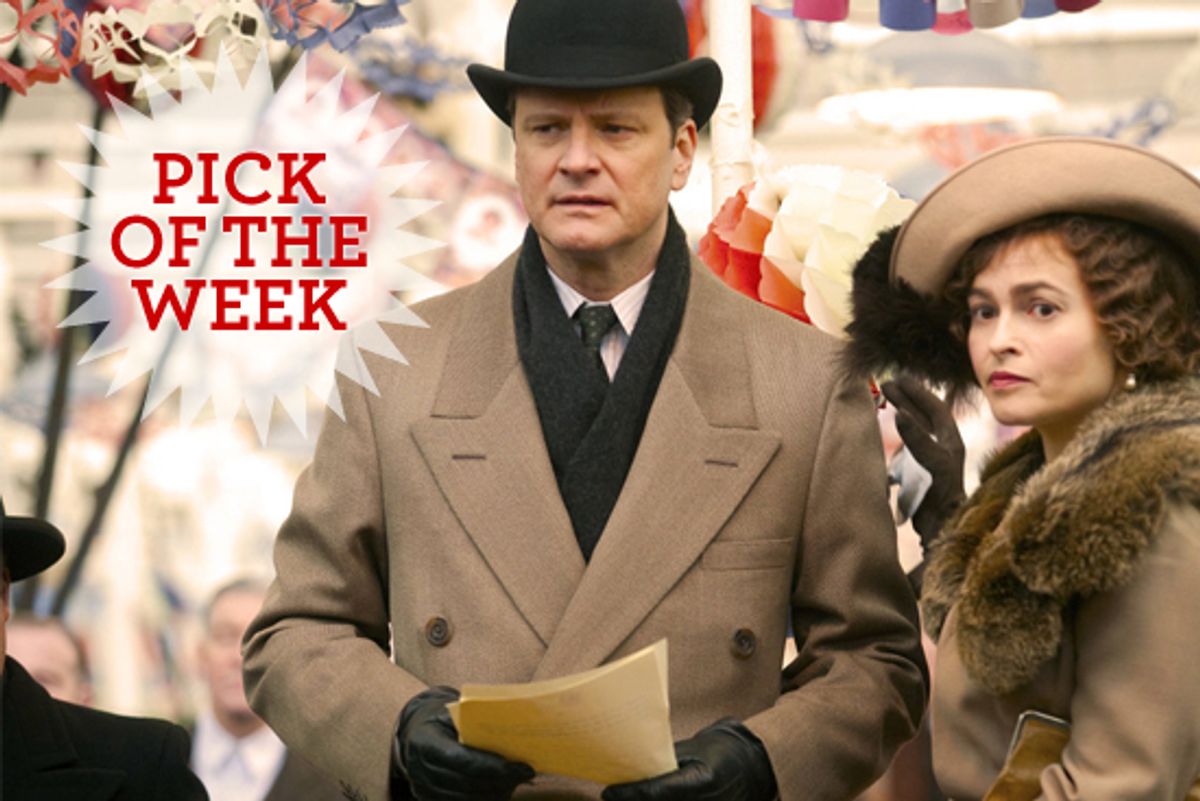 Colin Firth and Helena Bonham Carter in "The King's Speech"
--

I went to "The King's Speech" completely prepared to dig in and resist it: a British period piece, suffused with imperial nostalgia, about a member of the royal family nobly battling a disability. Trustworthy people told me they loved it, but I knew better. Could such a movie be anything but sentimental claptrap, a prettified picture of a long-gone era when kings behaved like kings and commoners knew their place, shamelessly crafted to lure Oscar voters?

Maybe not. There's nothing I can tell you about "The King's Speech" that contradicts that description, except that resistance is futile. It's a warm, richly funny and highly enjoyable human story that takes an intriguing sideways glance at a crucial period in 20th-century history. Its star performance, and probably the best reason to see it, comes from Colin Firth as the monumentally awkward Prince Albert, or Bertie, who became King George VI unexpectedly in 1936 after his older brother, Edward VIII (Guy Pearce), abdicated to marry American divorcée Wallis Simpson (Eve Best).

For all the pomp and privilege of his upbringing, Bertie was essentially an abused child, tormented by nannies, plagued by childhood ailments and raised in isolation from the outside world. He barely knew his parents (Michael Gambon plays King George V, his father), had no real friends, wore painful leg braces and suffered from early childhood from a chronic stammer that made his public appearances painful for everyone. Perhaps the last monarch reared in the old aristocratic style, with a father who ruled at least nominally over one-fourth of the globe's population, Bertie was literally a man trapped between worlds. As Firth plays him, the prickly prince (who spent his early career as a naval officer and teacher) is eager to take offense yet painfully shy, fully aware that the monarchy has become a defanged symbolic contrivance in an age of radio and motorcars, yet halfway convinced that divine right is still involved somewhere.

The unlikely story that director Tom Hooper and screenwriter David Seidler spin in "The King's Speech" is pretty much true: Bertie and his wife, the high-spirited Princess Elizabeth (Helena Bonham Carter, absolutely sparkling in a second-fiddle role), somehow find their way to an Australian-born speech therapist and amateur actor named Lionel Logue (Geoffrey Rush, in his maximum wisdom-and-twinkle mode). Logue isn't a doctor, has no academic credentials and is viewed by proper authorities as a charlatan. But his then-radical idea that stuttering was as much a psychological problem as a physiological one, and that its roots lay in childhood, is exactly the medicine the future king required.

I don't know whether the real Logue told Bertie to envision his public speeches as snatches of song (although that's fairly standard therapy), or to distract himself by exclaiming words and phrases a man of his position is never supposed to speak or even think. Either way, watching these two acting pros go at each other hammer-and-tongs is well worth the price of admission, and both Firth and Rush are being urged to clear some knickknacks off the mantelpiece before February. Their scenes together are marvelously paced and full of laughs, but add up to something richer and subtler than standard British class-barrier comedy. Each of these men is a desperate misfit -- the stuttering prince and the would-be Aussie Shakespearean -- badly in need of a new friend and a bit more self-esteem.

There is an element of rose-tinted nostalgia, perhaps, in Hooper's loving and precise evocation of imperial Britain between the wars. But even more than that, there's an appreciation for its peculiarity and fragility: The clipped, fruity BBC accents, the top-hat crowds at "industrial exhibitions" and horse races, the late-Victorian sense that the British monarchy, even with its wings clipped, is the very center of the universe -- all of that is about to give way to a new order. George VI not only had to deliver a crucial 1939 speech telling his people that they were going to war with Germany (that scene provides the film with a half-manufactured climax), he also presided over the rapid dissolution of his great-grandmother Victoria's empire. He would be the last English monarch to also be designated emperor of India and king of Ireland; by the time his daughter became Queen Elizabeth II in 1952, there was a new, nuclear-armed Yankee sheriff in town and Britain had become a second-rate power at best.

Hooper's direction is straightforward and unshowy, pretty much in the mode of high-end British TV. This is a picture full of old-fashioned audience satisfaction, and one that should garner numerous awards nominations for its cast. (Firth is the early leader in the best-actor sweepstakes, and I'd expect both Rush and Bonham Carter, who has hardly ever been this likable, to be nominated in supporting categories.) Even smaller parts and cameos are stocked with brand-name talent: Along with Gambon as the beloved but remote George V and Pearce as Edward VIII, the idiotic, Nazi-friendly playboy, we see Derek Jacobi as the Archbishop of Canterbury, a hilarious turn from Timothy Spall as Winston Churchill and Anthony Andrews as the prewar prime minister Stanley Baldwin, who forced Edward to abdicate.

In recent years, the Academy's best-picture voters have often overlooked this kind of old-school, openhearted audience-pleaser aimed at a wide adult public -- what they used to call a "honey, let's hire a sitter" movie -- and in terms of pure cinematic craft "The King's Speech" arguably isn't in the same class as "Inception" or "The Social Network" or Darren Aronofsky's forthcoming "Black Swan." That seems like a topic for another time, but the point to make right now is that even if you're an unregenerate monarchy-hater like me (and I was trained by my Irish Republican father to view the royals as corrupt, subhuman leeches) "The King's Speech" is both a great night at the movies and a terrific yarn of unexpected human and historical depth.

"The King's Speech" opens Nov. 26 in New York and Los Angeles, with national release to follow.