When the turkey took revenge, I took to vegetarian gravy

After a Thanksgiving of food poisoning, I swore off the bacteria-ridden beast and came up with this bird-free gravy 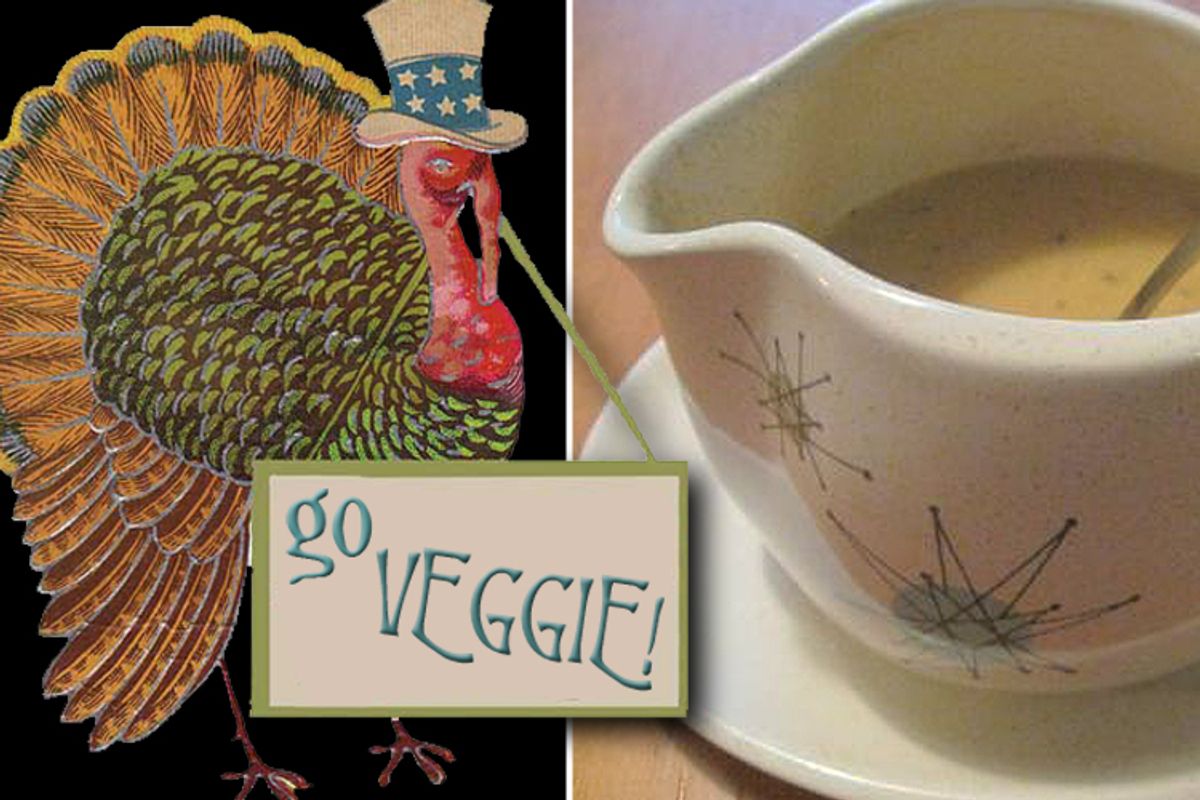 Early November 1999, I was driving down a rural highway on a sunny afternoon. As I rounded a corner, I was startled to see a wild turkey trotting across a cotton field -- faster than you might imagine -- heading toward the road. Math was not my best subject, but given my speed, the turkey's speed and our projected paths, even I could calculate that we were a bloody word problem about to happen.

At the moment his body should have been hitting my windshield and exploding like a grotesque feather pillow, he flew back a few paces and I whizzed by without hitting him. "Stupid turkey!" I groused. "You almost got yourself killed!"

A few weeks later, on Thanksgiving Day, I did something almost as stupid. I wasn't as careful as I should have been when handling the turkey (you know -- wash your hands frequently, use a designated cutting board, disinfect surfaces ...) and I spent the night singing whale songs into the deep, mysterious hole at the bottom of the toilet. The next morning, I was in the emergency room.

The CDC estimates that in the U.S. there are 76 million food-borne illnesses per year and over 5,000 deaths. Bacteria-laced poultry is the leading source of food poisoning. So there were others like me in the E.R. that morning, women and men with mint-green faces, wretchedly hunched over cramping bellies, clutching an assortment of decorative bathroom trash cans under their chins. One trash can had mockingly happy Disney characters on it. After a miserable, interminable wait, I was given IV fluids, Phenergan and another deliciously heady medicine that had me nattering on about how creepy it is that Mickey Mouse wears gloves but no shirt.

It was pretty easy to give up turkey after that. The next Thanksgiving, I brought a Tofurkey to the family gathering. It wasn't bad, just a little eerie in its fleshy texture, and in general, if I look at a food product and envision the manufacturing process -- a large vat, gelatinous slurry, an extruder -- it's an appetite turnoff. When it comes to the Thanksgiving feast, meat substitutes are unnecessary. There are always plenty of meat-free offerings among the casseroles and side dishes. I've never gone hungry.

The most difficult adjustment has been editing recipes to suit a less-than-adventurous crowd. When you remove meat from your diet you have to replace the flavor with other ingredients. Sometimes those ingredients are unconventional, even weird, and Thanksgiving seems to bring out the traditionalist in everyone. They want the same green bean casserole, the same sweet potato soufflé, the same stuffing. If I'm being honest, seeing the same spread year after year is reassuring, comforting. My mother and my mother-in-law are still with us, still healthy, and on Thanksgiving, the kitchen is still their domain.

This year, I'll bring a bowl of vegetarian gravy and a big salad with homemade dressing and croutons. I'll join the matriarchs in the kitchen, chop pecans for the stuffing,  set the table, make sure the bread doesn't burn. I'll wash my hands a lot, and remind them to do the same! And I'll be oh-so-thankful I've had one more year as a "kid."

I promise you won't miss the pan drippings! If you've ever had a vegetarian gravy or stew and the flavor was "thin," lacking umami, the missing ingredient is nutritional yeast. It's a staple in a vegetarian pantry. I add it to soups, stews, gravies, pot pie and shepherd's pie fillings. You can buy it at any health food store, just be sure you don't pick up brewer's yeast by mistake.

Note: To make mushroom gravy, add a cup of chopped mushrooms to the oil when you add the onion. To make tomato gravy, add a large tomato, finely diced, to the pan once the onions are translucent, and cook until the tomato is softened before proceeding with the rest of the recipe.