The war on Christmas heats up 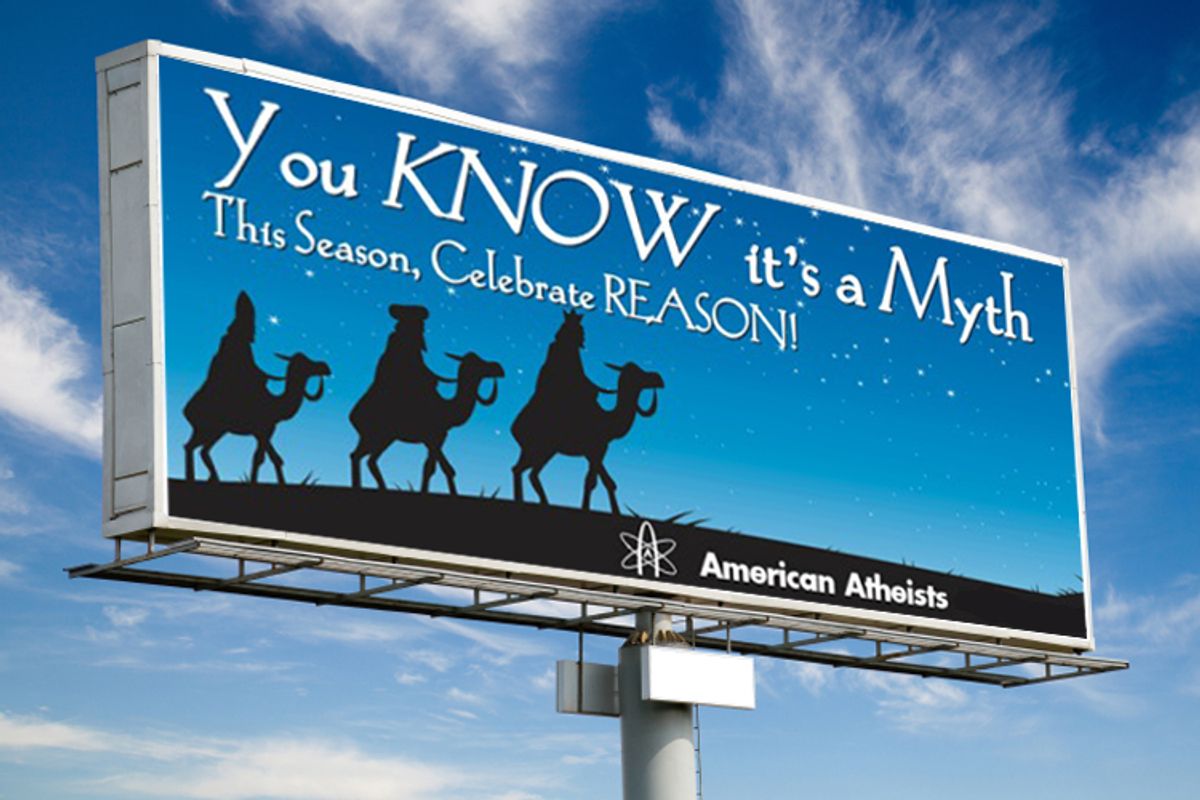 Thanksgiving is over, and you know what that means -- 'tis the season for aggressive salesmanship. Case in point: a star-emblazoned new billboard outside New Jersey's Lincoln Tunnel featuring three wise men en route to a manger, along with the message "You KNOW it's a myth. This season, celebrate REASON!" Yes, like caroling and Walmart stampedes, the war on Christmas is now officially its own holiday tradition.

I generally don't get my worldview advice from signs along the I-495, nor, I suspect, do most of the drivers venturing into the city for work or a glimpse of the Rockettes. If the American Atheists, who paid 20 grand for the sign, want to add a message of "reason" to this time of year, it's certainly less intrusive and annoying than the constant loop of Mariah Carey's "All I Want for Christmas" that's already haunting most of our dreams. And as a practicing, questioning Christian, I'm in strong agreement with the belief that church and state should firmly be separated, and with the concept of civil rights for all Americans, regardless of their points of view. Because shoving your beliefs on other people is just plain rude. Do you see where I’m going with this? Whether one unshakably believes in a perfectly swaddled little baby Jesus who arrives precisely on Dec. 25 surrounded by cute donkeys and starstruck shepherds is hardly the point. It's that snotty, oh-just-face-it-you-idiots attitude, that utter certainty, that's just as belligerent coming from an atheist as it from an evangelical.

And why, in a season that's sacred for a variety of faiths, take broadside aim at just one group? Sure, Christmas is the biggest fish in the December pond, but I can't help wondering how well a billboard featuring that same message and a menorah would have played. Maybe while they're at it, the American Atheists would like to lay out for some smaller, yet just as pointed, "Your religion is BS" messages timed to Ramadan and Diwali. A pithy, we're-not-gonna-take-it billboard may be an attention getter, but how about using some of that reason you're arguing for? How about acknowledging that traditions and rituals can be a means of honoring ideologies that are far more subtle and complex than a chorus of "Oh Come All Ye Faithful"? Or to put it another way, how about considering that faith and reason are not always in direct opposition, or that anyone who believes in anything is not automatically a myth-embracing moron?

American Atheists' Dave Silverman told Fox that the billboard is not intended to convert Christians, "The intent is to get atheists who are going through the motions to stop." Funny how they didn't actually say that in the billboard. It's even funnier that the organization itself says that "Theists love to validate their myths by trapping atheists into a philosophical discussion of knowledge and certainty." I agree; steadfast philosophical knowledge and certainty almost always leads to rigidity and douchiness.

If you don't want to get your ho-ho-hos out, by all means, abstain. But in a season of love and generosity, it's good to remember that a "We're right and you're wrong" bah humbug message to the bridge and tunnel crowd doesn't exactly sound like tolerance. And even if you don't believe in Christmas, an open mind is a gift that's worth sharing any time of year.