Did a Politburo member have a Cultural Revolution flashback after searching for himself on the Net? 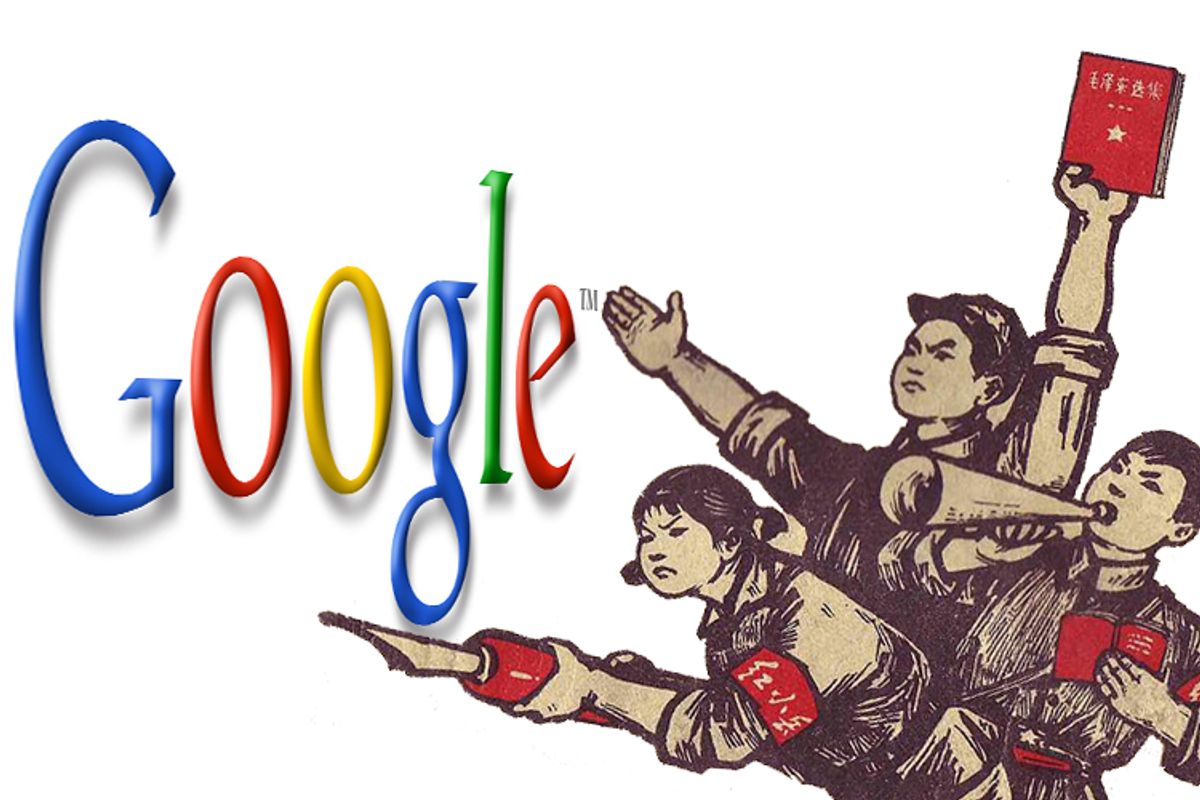 With the entire rest of the the media universe fixating on the WikiLeaks release of U.S. diplomatic cables, HTWW feels an irresistible pressure to chime in. According to the New York Times, one as-yet-unreleased-to-the-public cable from the American embassy in Beijing cites "a Chinese contact" as the source of an assertion that "China's Politburo directed the intrusion into Google's computer systems in that country" -- an incident that the search engine giant blamed for its decision to withdraw from China. The Guardian further spices up the news with a report that the hacker attacks "were orchestrated by a senior member of the Politburo who typed his own name into the global version of the search engine and found articles criticizing him personally."

The sourcing is thin, but after my own recent visit to China, I can't say the idea is inconceivable. Upon reading the news I was immediately reminded of something that a senior Chinese academic at a respected Shanghai think tank said to my visiting group of American journalists after we asked him why China was so dedicated to censoring the Internet. After a boilerplate preamble that rambled on and on without answering the question, the professor suddenly delivered a startling conclusion:

"The last time anyone could say anything they wanted in China was the Cultural Revolution. And no one who lived through that wants to live through it again."

Maybe I haven't been paying enough attention (or spent enough time talking to senior Chinese academics), but this was the first time I had ever heard an explicit comparison between the destabilization wrought by the Cultural Revolution and the potential chaos that could be unleashed by the awesome power of a searchable Internet. But the more I think about it, the more sense it makes. The great paradox at the heart of the Cultural Revolution was that even though the movement was started by orders from the very pinnacle of the Chinese Communist Party, the result was a toppling of hierarchies all over the country -- the elevation of China's youth as the destructive arbiters of culture and politics. In a country where respect for hierarchy is embedded in the cultural DNA, the Cultural Revolution was almost unthinkably subversive. And so, essentially, is the Internet, which gives more people more room to say nasty things about people in authority than any medium of communication heretofore invented.

China's senior leadership is deeply scarred by the traumautic events of the late 1960s, and I can easily imagine a Politburo member having awful flashbacks after searching for his name on Google and discovering his own personal denunciation. A very obvious explanation for why China's rulers are so intent on maintaining order is that they have a much more up-close-and-personal experience of chaos than do their counterparts in Europe or the U.S. or Japan.

The really interesting question about China's future that needs answering is what happens when that generation no longer holds the reins of power? The Chinese who have come of age in the last two decades are far more familiar with cutting-edge cellphones than they are with wrenching nationwide cultural disasters. I'm not saying that China will ever experience a shortage of Confucian-empowered authoritarians who are happy to act upon their deep conviction that the common people need and want to be told what to do by their leaders, but when the nation as a whole no longer feels the deep wounds inflicted by the 20th century, I'm guessing that the impulse to clamp down on the Internet -- as well as the tacit acceptance of censorship by the general population -- will become less and less of a priority.