The unexpected genius of Leslie Nielsen

The "Airplane!" actor will be remembered as a manic goofball -- but his comedy success almost didn't happen 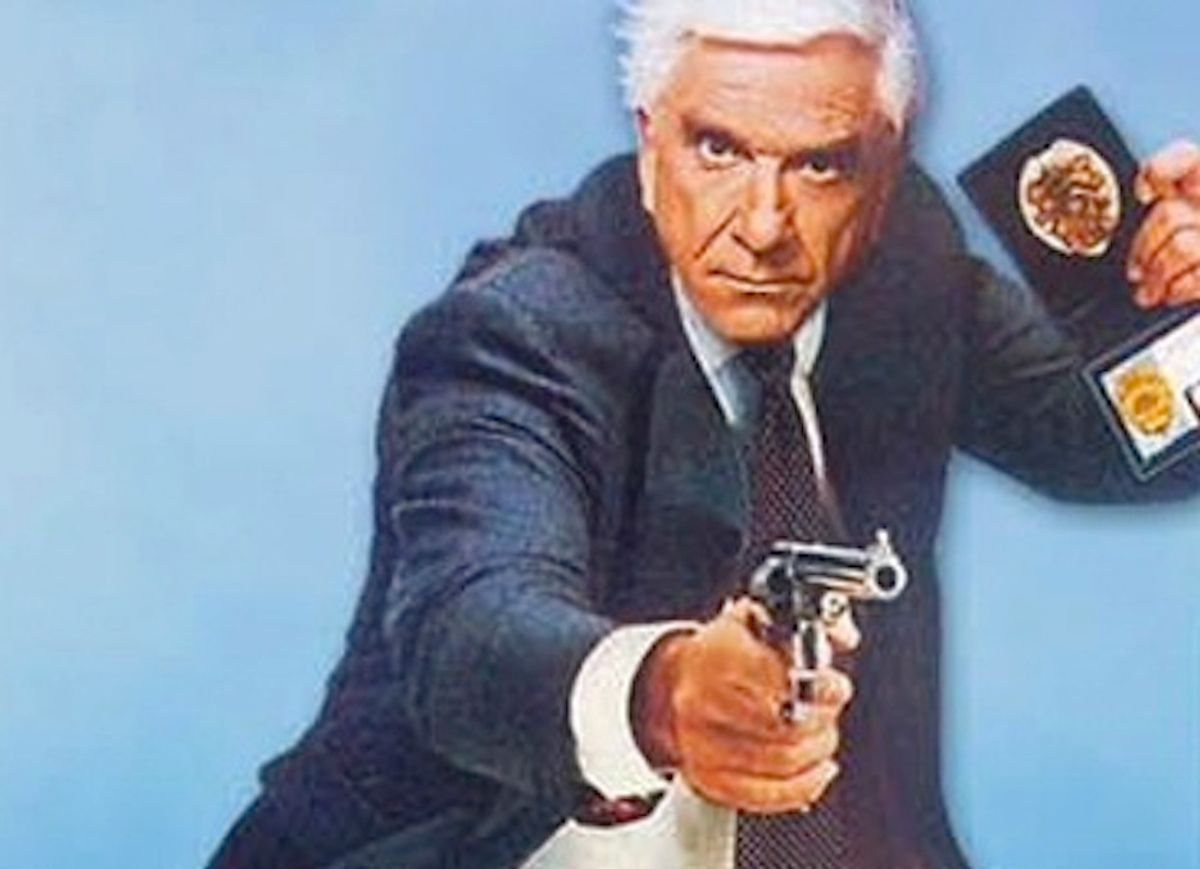 Detail from poster for "Naked Gun"
--

As a child, Leslie Nielsen, who died yesterday at 84, was obsessed with the Johnny Weissmuller Tarzan movies. When he heard there was an open call to cast Tarzan and Jane's adopted child in 1939's "Tarzan Finds a Son!," he started fantasizing about playing the role.

And then he stopped. "They found a guy; Johnny Sheffield was his name," the actor told an interviewer at a 2008 repertory showing of "Airplane!" "But it dawned on me before then that I never had a chance to be Tarzan's son. It was just not in the cards. And why? Because I'm bow-legged. You can't have a bow-legged kid swimming and running around and doing all those things Johnny Sheffield could do."

Prior to that 1980 comedy by Jerry Zucker, David Abrahams and David Zucker (also known as ZAZ), there was little on the Canadian actor's résumé to suggest a world-class clown in the making. He was a well-liked, capable leading man who had spent the previous 30 years supporting himself in a cutthroat industry without turning into a jerk -- no small feat, admittedly, but not the stuff of legend either. Every now and then he'd get to be funny -- for instance, playing opposite Don Knotts in "The Reluctant Astronaut" or playing a cop on "The Red Skelton Christmas Show." But those were the exceptions. Whether he was acting in a classic sci-fi film ("Forbidden Planet"), romantic melodrama ("Tammy and the Bachelor") or disaster picture (he was the captain in the original "The Poseidon Adventure"), or guest-starring in a TV show -- often playing characters whose names were preceded by Dr., Col., Officer, Agent and other official titles -- Nielsen projected dignity, competence and wary charm. He was on "Ben Casey," "Dr. Kildare," "The Big Valley," "Bonanza," "Gunsmoke," "S.W.A.T." and many other series. Sometimes he was the bad guy: a murderer, a crooked businessman, a craven desk-jockey obstructing the heroes. But most of the time he was just another actor in the frame, helping tell a story whose weight was being carried by performers with bigger names and fatter paychecks.

Then came "Airplane!" and ZAZ's short-lived but much-loved 1982 series "Police Squad!," which was reincarnated on the big screen as the "Naked Gun" franchise. Nielsen was reborn as a gray-haired clown. He turned his radio-ready baritone into a comic instrument and played it with gusto.

Between his scene-stealing turn as the doctor in "Airplane!" ("It's a big building with patients, but that's not important right now"), his hard-boiled/softheaded Drebin (narrating his own case files in Philip Marlowe-style deep-purple prose), and subsequent roles in the same vein, audiences tended to forget the first half of Nielsen's career. That's not a slam against Nielsen as a dramatic actor (or announcer; he did a lot of voice-over work). But it is an admission that while Nielsen was good in straight parts, he rarely appeared in roles that made you think, "What an original screen presence. I can't imagine anyone else playing that part."

This sad state of affairs changed the minute ZAZ, who'd previously cast Nielsen in a bit role in their 1977 debut "Kentucky Fried Movie," handed him the role of Dr. Rumack in "Airplane!," who keeps warning terrified people on a doomed jetliner to stop calling him Shirley and inspires the hero with a monologue about George Zip, aka "The Zipper." Suddenly Nielsen wasn't an aging utility infielder anymore. He was unhinged and unpredictable -- a silver-haired goofball whose very existence on-screen was a sight gag, as well as a reminder that typecasting prevents viewers from knowing what performers are really capable of.

The actor Martin Donovan once told me that in the entertainment business, as in every business, the majority of decisions are motivated by the desire not to get fired. "That's why you see a certain actor playing cops over and over again, or a certain actress playing the funny best friend that the heroine tells her problems to," he said. "The casting agent says, 'I could give this part to somebody I think might be able to do it but hasn't done it before and get fired if I'm wrong. Or I can give it to somebody I know for a fact can do it because he's already done it three times, and keep my job.'" "What the hell, why not?" thinking lets actors give some of the greatest and most unexpected performances of their lives: Gregory Peck in "The Gunfighter"; Mary Tyler Moore in "Ordinary People"; Nancy Marchand on "The Sopranos"; Gerald McRaney, aka Major Dad, as the terrifying George Hearst on "Deadwood"; Nielsen as Frank Drebin. I don't think it's a coincidence that William Shatner -- who had spent much of his career playing cocky, nervy, macho hero-types -- started his own remarkable career reinvention in the sequel to "Airplane!," 1982's "Airplane 2."

"Airplane!" was a low-budget, low-stakes movie being made at a time when its releasing studio, Paramount, was too preoccupied with bigger films to second-guess the filmmakers. If ZAZ's bosses had paid more attention, business-as-usual might have prevailed, and the film would have stunk, and Leslie Nielsen as we now know him would never have existed. There's almost nothing in Nielsen's early career to suggest he could nail the dance scene from "Naked Gun 1/2" opposite Priscilla Presley (another beneficiary of ZAZ's prankster attitude toward casting). But nail it he does. "The man is as dirty as a coal miner's underwear in January," Drebin exclaims, doing the swim.

When I interviewed the "Airplane!" co-directors for a 30th anniversary piece this past summer, they said the film's success was based almost entirely on casting a spoof with actors known for playing things straight -- Nielsen, Peter Graves, Lloyd Bridges, Robert Stack, Beaver's mom Barbara Billingsley -- and telling them to behave as if they were in a nail-biting drama. Some of the cast took a while to get into the ZAZ groove; Nielsen was in it from Day One. His costar Robert Hays told me that Nielsen carried a tiny whoopie cushion and used it during takes to keep the other actors on their toes and keep himself amused. "He played that thing like a maestro," Hays said. (I unfortunately wasn't able to interview Nielsen for that piece, by the way; his press agent, David Kramer, told me he was an impulsive person who accepted or rejected interview requests for all sorts of random reasons. "I've lost him," Kramer wrote me. "He's off in the trackless wastes with some buddies, and typically incommunicado.")

Friends and family said Nielsen was always a cut-up. Once he started appearing mainly in comedies, that aspect of his personality took center stage. Playing the doctor in "Airplane!," Drebin in "Police Squad!" and the "Naked Gun!" spinoffs, the president of the United States in two "Scary Movie" installments, and other ludicrous parts didn't just make him an unlikely star at a time when most actors would have been contemplating retirement; it gave him permission to show us who he really was. You could say that by appearing in "Dracula: Dead and Loving It," "Mr. Magoo" and other such dreck, Nielsen squandered the goodwill he'd earned working for Zucker, Abrahams, Zucker and their sometime writing partner Pat Proft -- and you might be right. But I'm not inclined to condemn Nielsen for emptying a well that didn't come into existence until he was 54. He got a second chance, he made the most of it, and when he died, obituary writers described him as a comedian.

Not bad for a bowlegged boy.