Get ready for a day without celeb tweets

Stars pledge to go silent on the site to help fight AIDS -- but will we ever want them to start up again? 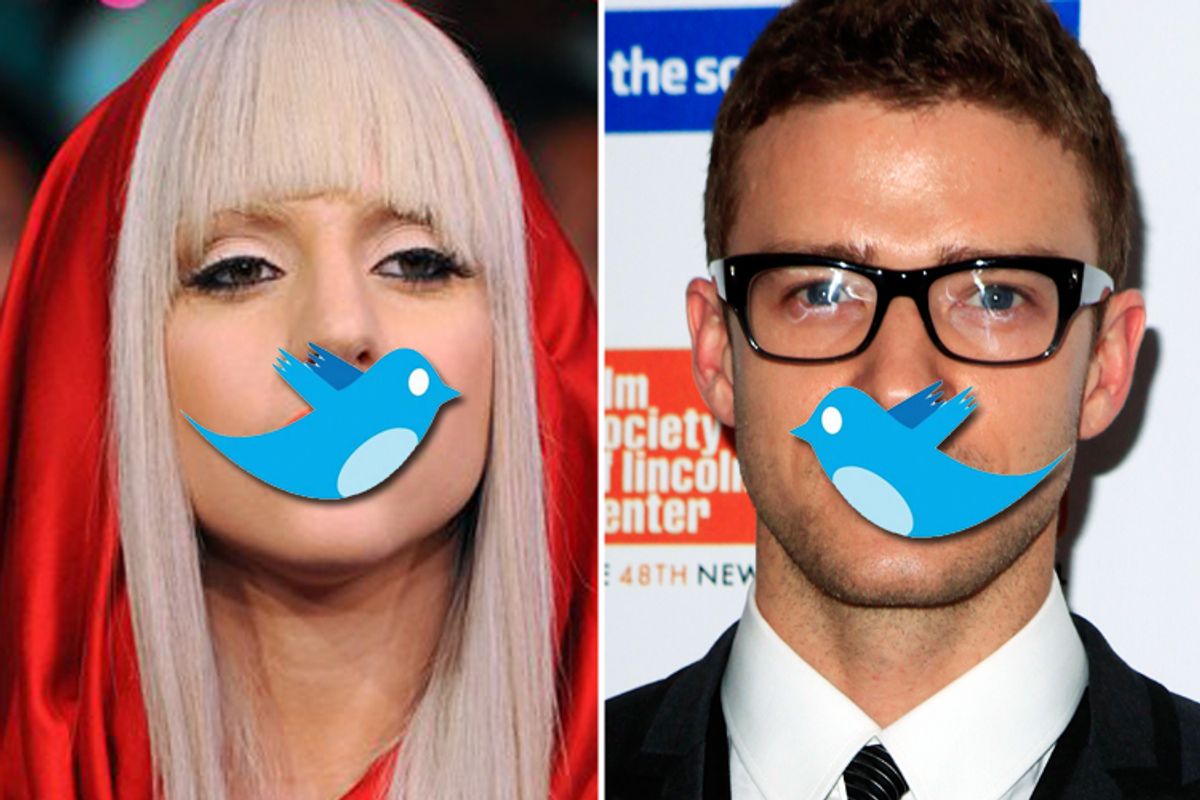 Imagine a world with neither Kim nor Khloe Kardashian's Twitter feeds ("OMG The View was SOOO much fun!"). Or Ryan Seacrest's. Or Lady Gaga's.

On Wednesday, you will be living in just such a world. For World AIDS Day, they, along with Justin Timberlake, Usher, Serena Williams and other celebs, will put their virtual lives on hiatus, abstaining from social media until $1 million is raised for the Keep a Child Alive charity to buy back their lives. The organization, co-founded by Alicia Keys, provides treatment and support for families affected by AIDS in Africa and the developing world and earns a four-star rating from Charity Navigator.

The project, which Keys says is "a direct and instantly emotional way to get people to pay attention," is inarguably a worthy cause. While the promise of more Kardashian tweeting isn't exactly my idea of an incentive program, it's still admirable for celebrities to use their considerable social media clout to call attention to a global epidemic. (Gaga alone has more than 7 million Twitter followers.) And the idea of giving up a virtual life in the cause of keeping real people alive makes for a clever metaphor.

But there's also something predictably self-aggrandizing about the image of Kim Kardashian decked out in the world's most glam coffin and a pose that looks far more afterglow than rigor mortis for the campaign's poster, which features the tag line "She sacrificed her digital life to give real life to millions of other affected by AIDS." And her huffy tweeting that she's making this grand sacrifice "to save a child's life dying from AIDS!" makes it easy to hear the self-applause all the way from here.

But perhaps the most unusual thing about all this high-profile unplugging for the cause is how much it speaks to a new and different tone in social media. Wasn't it just in September that TwitChange was auctioning off the Twitter attentions of a variety of celebrities for Haitian relief? Now, in the same month that Jimmy Kimmel declared a national "Unfriend Day," the notion of ratcheting it down instead of ramping it all up is sounding better and better.

Even though the World AIDS Day effort is a stunt, the whole thing also might come as a welcome relief for its participants -- and frankly, the rest of us. Sharing what one ate for lunch with the world and the accompanying attention it provokes are all well and good, but there's something compelling about not doing it too. The pressure to amuse one's followers, to keep up with what they have to say as well, can be a real pain-in-the-butt distraction -- whether one's circle numbers in the dozens or the millions.

So the real test of this experiment will not be how quickly Justin Timberlake and company can scare up their targeted amount of money (hint: very quickly), but what effect if any their virtual absence has on the digital terrain. Will a short-term lack of Jennifer Hudson tweets create a gaping hole in our lives? If we have to pay the Kardashians a million bucks to get back online, how much will it take to keep them off? And what if the whole thing becomes a chance to discover that a little scaling back, a little quiet, is good for the collective soul? Using social media to raise money and awareness is powerful and effective. But if none of us ever read or write another tweet about anybody going or not going to the gym today, the world will likely continue to keep spinning. And while that simple notion is no cure for AIDS, it is, in its own small way, rather healthy.