Can Franco and Hathaway save the Oscars?

In the past few years, the ceremony has been a tedious mess -- but the new hosts might be just what it needs 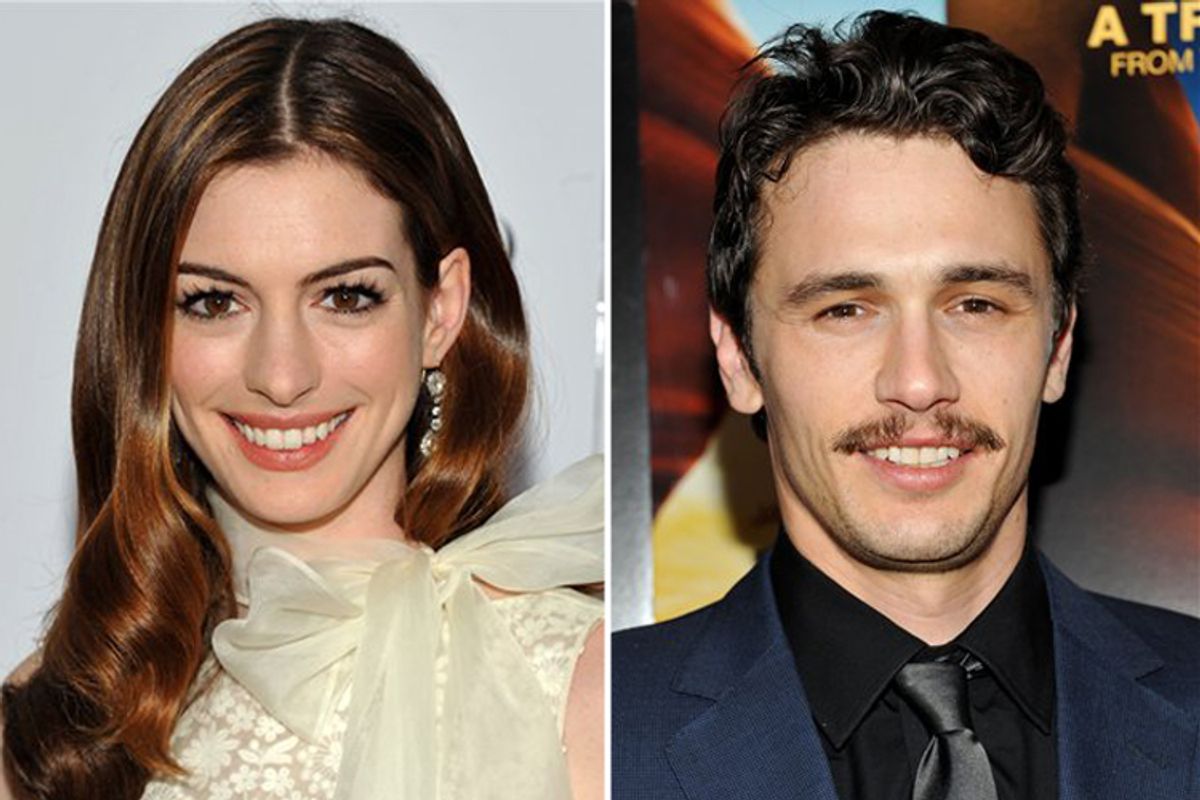 It's heresy. It's sacrilege. And it's awesome. On Monday, the venerable, tame and so-boring-it-hurts Academy of Motion Picture Arts and Sciences announced that the hosts for the 2011 Oscars would not be some beloved middle-aged talk show host or comedy star, but the young, multitalented, and absurdly attractive team of James Franco and Anne Hathaway. Oh, this should be interesting.

A spectacle that's already rife with inherent hubris and tedium, the Oscars have been cursed for the better part of the past decade with a slew of unmemorable hosts. With the glory days of Johnny Carson and Billy Crystal a thing of the past, Oscar has gone in a variety of directions hoping to capture its audience-connecting magical blend of smirk and sincerity. Comedians Chris Rock and Jon Stewart never had enough of the Hollywood glamour. Hosts who rocked other awards shows -- like Emmys favorite Ellen DeGeneres and suave Tony host Hugh Jackman -- were capable enough but seemed out of their natural milieus. This year's hosts, the smooth, reliably funny and just-movie-star-enough team of Alec Baldwin and Steve Martin, were the best the show has offered us in years, yet several months later, it's hard to recall a single runaway moment of wit or brilliance from their performances. The Academy might have done fine bringing back one or either for another go for the next broadcast, so it's surprising, refreshing and probably a sign of at least a little desperation that the awards are going in such a different hostly direction this time out.

The broadcast, which sank to an all-time low in viewership in 2008, has fared better with audiences the past two years -- notably within the coveted 18-49 demographic.  It makes sense then that the producers want to attract viewers who might not be into watching the avuncular patter typified by recent hosts. (Even those quasi-hipster choices Rock and Stewart are in their 40s.)

Franco and Hathaway, ages 32 and 28, respectively, are, in contrast, a generation younger. They're also gorgeous and personable. But unlike nearly every other host of the past 25 years, their experience with audience corralling is limited. They're not comedians or talk show hosts, and even leading man Jackman had proved his mettle as a Tony host before getting the Oscars gig. Instead, as the L.A. Times quasi-lamented Tuesday, their "primary job qualification for hosting a live variety show is their experience toplining 'SNL.'"

And while the Kodak Theater is surely no Studio 8H, the "SNL" cred may be the best thing the two have going for them. The show hasn't broken big ground for either; instead it's highlighted their natural assets -- as deft, witty and incredibly quick-thinking performers. Franco, a shoo-in nominee this year for "127 Hours,"  has over the past few years distinguished himself as a fearless risk taker, a renaissance weirdo of many trades, and a guy who winningly takes himself nowhere near as seriously as the average Hollywood heartthrob.  And former Oscar nominee Hathaway  isn't just jaw-droppingly glamorous, she just happens to be a great little song and dance gal with a wicked sense of comic timing.

Had the Oscars gone with two big yet boring young stars for the hosting gig, the choice might be uproar-worthy. But Franco and Hathaway are rapidly becoming among the most beloved movie stars on the planet on more than the strength of mere charisma. They're gifted and entertaining as hell -- seemingly effortlessly so.

But if the history of awards shows proves anything, it's that there's no set of skills the transfers perfectly into being a fantastic host. Talk show king Carson was brilliant at it; Letterman was an utter bomb. Neil Patrick Harris seems born for this sort of thing; Chelsea Handler should never go near any venue where prizes are being handed out again. Whether Franco and Hathaway can pull it off, even with their ridiculous stockpile of charm and grace, remains to be seen. But even if it's a Bruce Vilanch gag-filled flop, the whole production will likely be as unexpected and seductive as the two new hosts themselves. Hathaway will sing and dance. Franco may take off his pants. And this time around, months after the show, we might even remember it.