Pentagon review or no, repeal of the discriminatory policy is probably a victim of GOP tax cut posturing 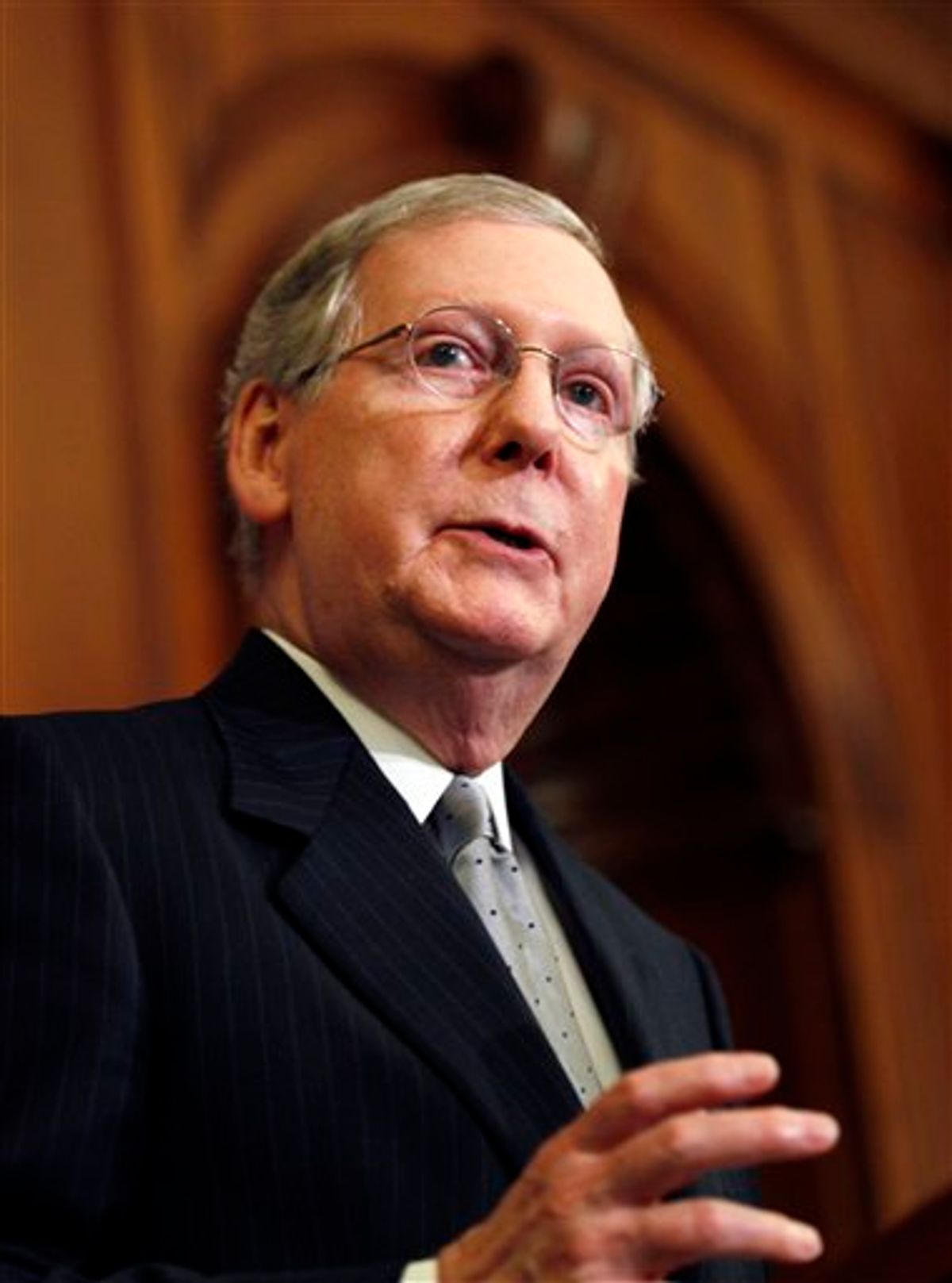 FILE - In this June 16, 2010 file photo, Senate Minority Leader Mitch McConnell of Ky., speaks on Capitol Hill in Washington. Congress returns with embattled Democrats torn between trying to show they have the answers to economic recovery and fearing the further wrath of voters over new government programs. It appears the fears will win out. (AP Photo/Carolyn Kaster, File) (AP)
--

Moderate Republicans won't have to bother to actively come up with reasons to oppose the repeal of "don't ask, don't tell," because I'm pretty sure that the infuriating debate over the method by which we'll eventually extend the deficit-exploding Bush-era tax rates will consume the entirety of the lame duck session.

Joe Lieberman, who is in the right on this issue, says there are 60 votes for repeal, but he can't say which Republican senators would actually vote to end a filibuster. He can't say which ones would do that because, if the letter all of the Republican senators signed is any indication, not a single one of them -- not Susan Collins, Olympia Snowe, Dick Lugar, or Lindsay Graham -- will vote to invoke cloture on anything until the Democrats finish caving entirely on extension of the Bush tax rates.

Democrats and Republicans may be close to some dispiriting compromise on the tax issue, but that compromise will be hammered out at some sort of bipartisan summit, and once the summit comes to an agreement (if it does!), both houses will have to vote on it, and by that point there's not a chance in hell that the Senate will manage to overcome legislative obstruction by opponents of gay rights and have a vote on "don't ask, don't tell" before everyone adjourns for Christmas.

(Please remember that Mitch McConnell, who is much smarter and cannier than Harry Reid, does not want this Senate to accomplish anything besides extension of tax cuts for wealthy people, and one thing Mitch McConnell is quite good at, besides looking like a blobfish, is delaying things.)

And then next year, we get a brand-new Congress that will be markedly less friendly to the concept of equality.

So... waiting months for that Pentagon review to provide political cover for votes in support of a popular measure that might've already have the votes anyway seems like maybe a bad move, in hindsight.