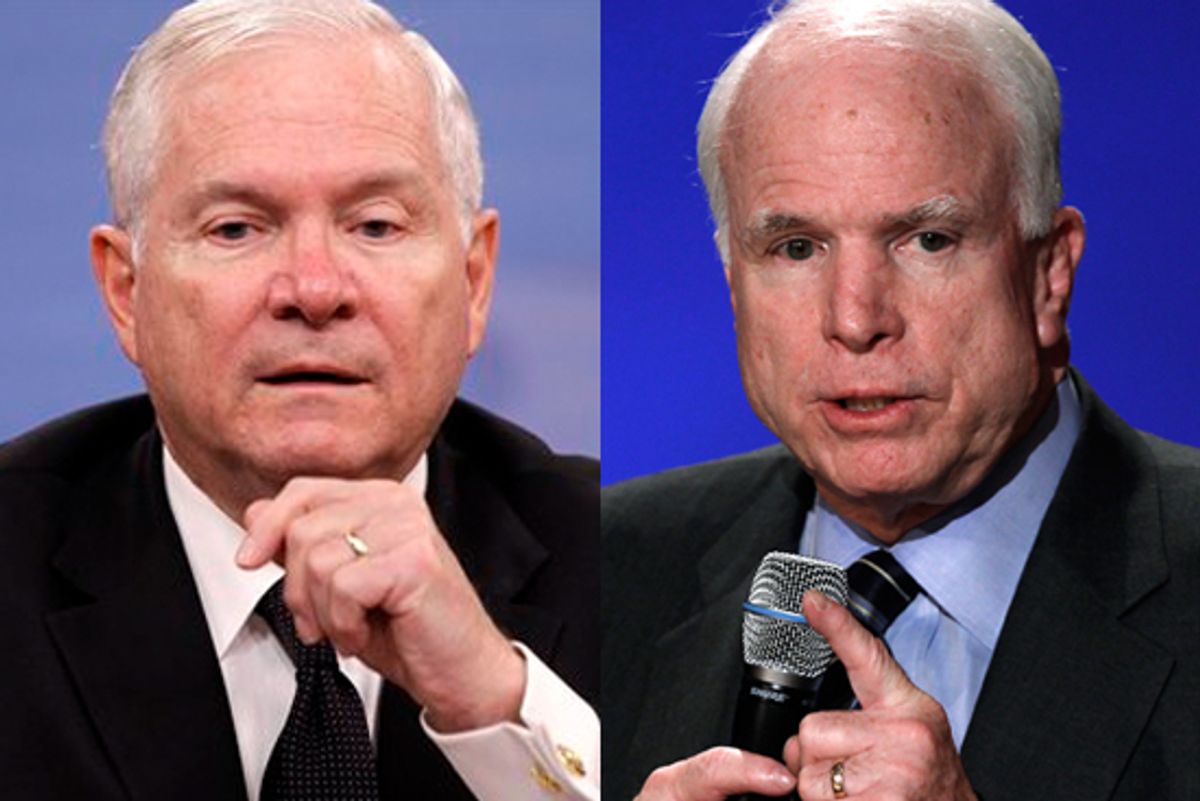 The Senate is holding hearings on "don't ask, don't tell" today, as Secretary of Defense Robert Gates continues to advocate for the repeal of the ban on LGBT troops. You may be surprised to hear that John McCain is embarrassing himself.

Sen. McCain doesn't want gay people to be allowed to serve openly in the armed forces. He doesn't want this mostly because Barack Obama does want this, but that is not a very "honorable" reason, so McCain has been making up various new new reasons to oppose the repeal of "don't ask, don't tell" for months now, developing new justifications each time his "concerns" are addressed.

Now that he has his lengthy Pentagon review that he was waiting for, he is sad that the report isn't good enough, and also he needs more time to read and debate the report that isn't good enough. According to OpenLeft's liveblog of the hearings (which are on C-Span 3 right now), McCain opened by complaining that the survey was not representative enough, and it's too long, and it didn't ask the right questions:

"[W]hat I want to know is not can our Armed Forces repeal this law but whether they should. Unfortunately, that's not the focus of this study ... this is a question that must be answered by Congress with proper consideration of the issue ... the DOD has had 10 months to complete this report. Together they contain over 1,000 pages of data and analysis. We received it 36 hours ago and are still carefully analyzing it. What I can saw now is that in addition to my concerns over what questions were not asked, I'm troubled by the fact that this report represents only 28% of the military force. I find that hard to view that as a fully representative sample set ... what appears clear is that the survey and anecdotal data ... do not lead to a firm conclusion."

The Pentagon survey's margin of error is below 1 percent, which even the most rigorous national political opinion polls seldom reach.

McCain then complained about the "rush to repeal," and said that while he's not necessarily against repeal, he is "simply saying that it may be premature ... without further consideration of this report and further study by Congress."

Of course, the policy is almost 20 years old, and repeal has been under consideration for more than a year now, but John McCain still hasn't decided if it is a good or bad idea. (When it came time to question Gates, McCain, desperate for more time to debate the policy, asked about WikiLeaks.)

The good news is that repeal opponent Jim Webb praised the Pentagon report effusively. And Maine's Susan Collins sounded very much in favor of repeal, as she always claims to be, but I'm guessing that won't translate into an actual vote in favor of her supposed conscience.