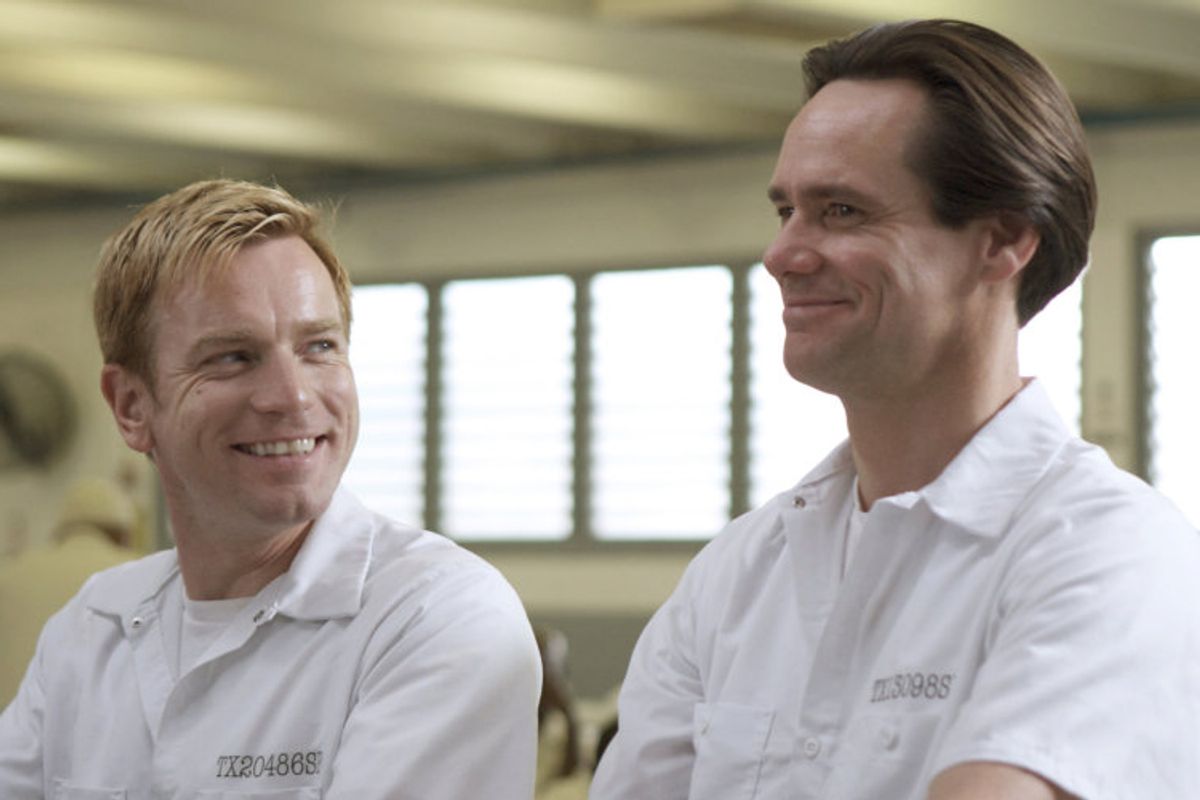 Ewan McGregor and Jim Carrey in "I Love You Phillip Morris"
--

When "I Love You Phillip Morris" premiered at Sundance in January 2009, nearly two full years ago, it felt like one of that festival's biggest talking points. The directing debut of comedy writers Glenn Ficarra and John Requa (creators of "Bad Santa" and the "Cats & Dogs" franchise) was trashy, anarchic, assaultive and often very funny. It starred Jim Carrey and Ewan McGregor. Some people loved it and others hated it, but it wasn't the kind of movie that left viewers neutral. You couldn't really have asked for a bigger P.R. splash, but as I wrote at the time, doubts and questions hovered in the air: "Although the film premiered here to an ecstatic reaction, it's impossible to know how it will translate to a real-world audience."

Ho ho ho. Everybody who saw "I Love You Phillip Morris" there and then was wondering the same thing, but none of us could have predicted that a picture with so much star power and potential news value would languish on the shelf for 22 months, only to get a small-scale release from an indie distributor in the middle of the overcrowded holiday season, long after its initial buzz had faded. This might sound paranoid, but you'd almost think there was some reason this madcap romantic comedy featuring two name-brand movie stars was too radioactive for Hollywood.

Yes, even in an age when Americans are more tolerant of homosexuality than ever before, when gay marriage is legal in several states and lesbians and gays may soon be able to serve openly in the armed forces, it's still possible to make a movie that is simply too damn gay. As married suburban cop Steve Russell (Carrey) tells the audience early in "I Love You Phillip Morris," it isn't just that he's gay. He's "gay, gay, gay, gay, gay." That voice-over accompanies a startling and hilarious interlude of Steve enjoying sexual congress with a beefy, mustachioed fellow (and how they got that scene, or this whole movie, past the MPAA with an R rating I will never know). There's considerable realistic action later on between Steve and his on-again, off-again paramour Phillip (McGregor), and I must add that while we've seen plenty of movies where straight actors play gay, this one involves some highly convincing sexual chemistry.

If you listen to right-wing commentators, you might believe that the movie industry is a massive conspiracy devoted to inculcating left-wing values in its audience, especially social acceptance of homosexuality. In fact, portrayals of lesbians and gays in the movies remain limited to inspiring mainstream fables, niche-marketed gay comedies (mostly terrible) and quasi-experimental "queer cinema" with almost no audience. Ficarra and Requa have not made a movie about noble gay martyrs or heroes or social pioneers, or a movie (à la this year's Oscar contender "The Kids Are All Right") that depicts gay people as normal, flawed parents and spouses. Instead, they made a movie that pushes the outer limits of liberal tolerance, and is unlikely to win GLAAD's seal of approval -- a movie about a shameless, flamboyant gay con artist and congenital liar and his sweet-tempered, dimwitted boyfriend, a movie about a gay American who is no less ruthless and stupid and brash and addicted to conspicuous consumption than the country around him.

In truth, the backstage soap opera of "I Love You Phillip Morris" and its long and winding road to theatrical release is complicated and not all that interesting. No doubt it's unfair to boil the whole thing down to a story of homophobia. But let's face facts, people: If Ficarra and Requa had made an outrageous farce built around two movie stars and a heterosexual love story, they might or might not have made any money, but they wouldn't have endured two years' worth of whispers and murmurs and unreturned phone calls and people treating them as if they had leprosy, boils and halitosis all at the same time, and you'd have had a chance to love or hate their movie months ago.

It's really too bad that "I Love You Phillip Morris" is likely to go down as a curious footnote in movie history, because whether you like it or not it isn't quite like anything you've ever seen before. Carrey provides one of his most whacked-out and enjoyable performances as Steve, a real-life con man who ditches his Virginia marriage and middle-class existence for the eponymous Phillip (McGregor), a sweet Southern boy he meets in prison. There's no easy way to synopsize the story, which involves a cascade of outrageous con games, prison escapes, impersonations and other felonies and misdemeanors.

Ficarra and Requa, in fact, make no effort to convince us that Steve and Phillip are good or decent people, which might be the most radical aspect of "I Love You Phillip Morris." It's not like they just want equality or tolerance or to be left alone, and there is absolutely zero discussion of gay rights or any other tedious social issue in this movie. They want fancy cars and boats and McMansions and big-screen TVs and fabulous clothes and everything else that our schizophrenic, authoritarian-libertarian society has to offer. They're crazy-in-love amoral antiheroes rebelling against a crazy world, and they're a pair of shameless homos. I guess it's amazing this movie ever got made in the first place.

Here's what I wrote about "I Love You Phillip Morris" from Sundance 2009, edited for context and clarity:

From somewhere in the middle of the 1,300 people packed into the Eccles Center here after the premiere of "I Love You Phillip Morris," somebody yelled out to Jim Carrey, "What was it like to kiss Ewan McGregor?" Wearing clunky, '70s-style glasses and his trademark pert expression, Carrey considered this with the attentive manner of a hunting hound. I wanted him to ask the questioner why every single straight actor who ever plays a gay character has to be asked the same stupid thing, but he didn't. Like all celebrities Carrey seeks to remain genial but vague in his interactions with civilians. Then a response came to him. "A dream come true!" Carrey crowed. "I mean, look at the guy!"

That got the audience eating out of his hand like tame reindeer at Santaland, and then a moment later it got better. Someone else asked a rambling, accusatory question that went something like this: OK, you made a completely crazy but compassionate film in which you and McGregor play lovers, but how are you serving the LGBT community as allies? Carrey and McGregor looked at each other; would either one rise to this bait? Toothy smile unwavering, and then Carrey stepped forward again. "I'll tell you how I'm serving the gay and lesbian community," he said. "With love and tolerance and treating everyone equally." The place fell apart. Such is the power of celebrity: An ordinary human response becomes a veritable utterance of Jesus.

Written and directed by "Bad Santa" screenwriters Glenn Ficarra and John Requa, "I Love You Phillip Morris" tells the unbelievable but somewhat-true story of Texas con man Steve Russell (Carrey's character), a onetime police officer whose long-running love affair with the eponymous Phillip (McGregor) led him to commit any number of outrageous criminal scams. Perhaps because Russell's real-life story defies all logic, the movie refuses to follow any normal narrative conventions, becoming a pell-mell, can-you-top-this odyssey beyond madcap farce into total derangement. It's like a Coen brothers movie, if Joel and Ethan did a ton of crank and decided to flush story structure down the crapper.

Within the first 15 minutes, Steve goes from being a married, Christian cop in Virginia to a gay playboy in Miami Beach to a prison inmate in Texas, which is where he meets Phillip. At least I think it's Texas -- Steve goes to prison so many times in so many places (and then escapes) that I can't keep it all straight. Whether you find this dizzying pace invigorating or just exhausting will pretty much determine your reaction to the film. I was on the fence; I admired Ficarra and Requa's blend of glossy Hollywood surface and dirty-minded, chaotic, criminal love story, but I also felt beat up by the end of the film.

You could say that adjusting to Steve's pace -- and particular pitch of insanity -- is the key question for Phillip too. McGregor gives a sweet performance, playing Morris as a shy, mellowed-out Southern boy who knows next to nothing about his boyfriend's various fraud and embezzlement schemes, impersonations of attorneys, prison escapes and efforts to fake his own death. He simply gets overwhelmed by Carrey, who gives perhaps the most amped-up and overcommitted performance of his amped-up and overcommitted career. He's great and he takes enormous chances and he's kind of too much, which I guess is how I feel about "I Love You Phillip Morris."

"I Love You Phillip Morris" opens Dec. 3 in New York and Los Angeles, with wider release to follow.