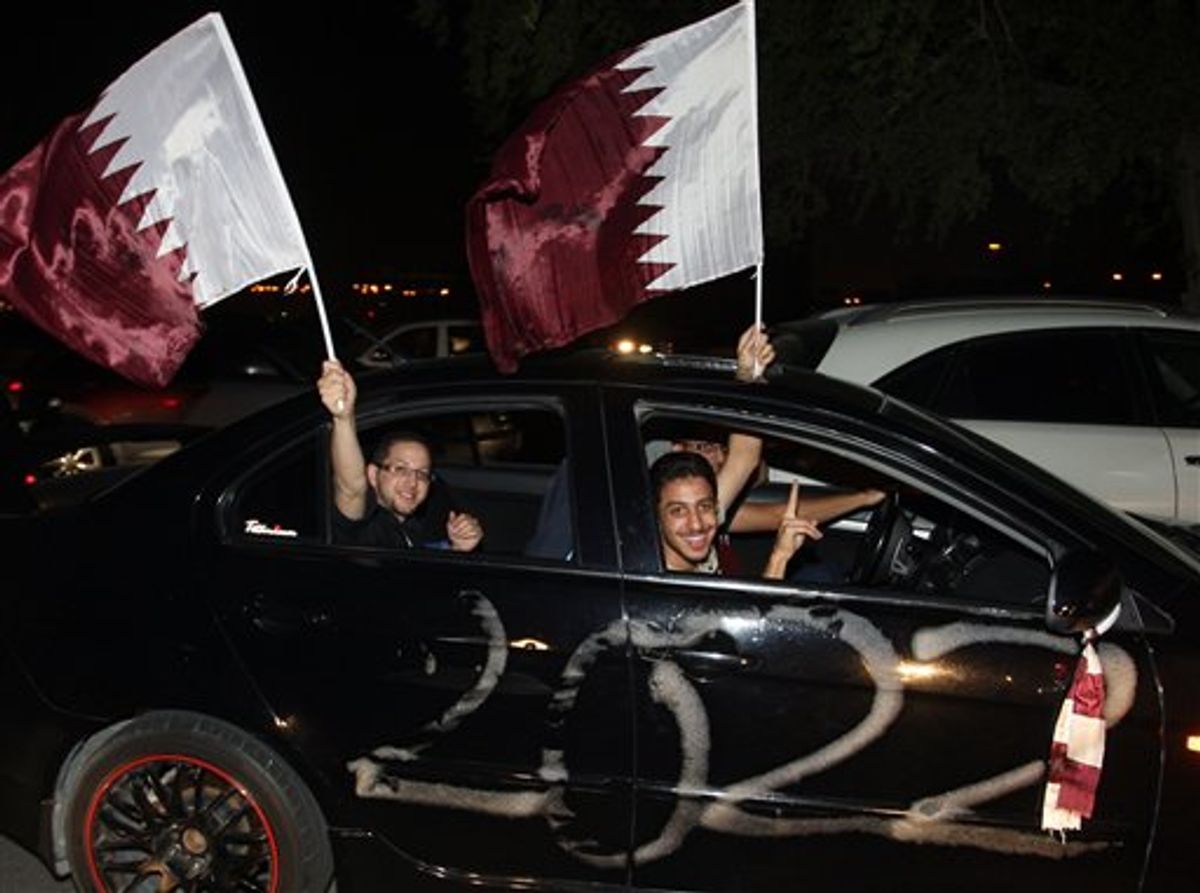 Politico's Mike Allen is outraged that FIFA didn't pick America to host the 2022 World Cup! It is his "top story" in this morning's "Playbook," his daily newsletter of birthday greetings to people you don't know and links to news articles from yesterday. (The top story comes after a line about someone's birthday, a recap of yesterday's "D.C.'s Funniest Celebrity" contest, and two news stories from yesterday about Michael Steele and online poker.)

The worst part is, not only was America snubbed, but terrorists won. The 2022 World Cup will be held in Qatar, a tiny Persian Gulf state. Behold the wrath of Mike Allen:

TOP STORY – "Russia and Qatar take World Cup to new lands" – Reuters/Zurich: "FIFA gave its ultimate recognition to emerging markets on Thursday by awarding the 2018 and 2022 editions of the prestigious and lucrative World Cup soccer finals to Russia and Qatar, both new hosts. Russia won the right to put on the 2018 World Cup, the first time it will have been staged in Eastern Europe after 10 editions in the western half of the continent. Qatar, which has never qualified for the World Cup finals, will stage the 2022 tournament, a first both for the Middle East and for an Arab country. It will also be the smallest nation ever to host the World Cup." http://reut.rs/hz0k7t

--The U.S. inexplicably lost to Qatar, which is two-faced in the war on terror and full of radical sympathizers. A Ben Smith reader points out a WikiCable "in which Mossad chief Meir Dagan briefed Bush homeland security aide Frances Fragos Townsend: Dagan characterized Qatar as 'a real problem.'" http://politi.co/f0kcmq

PLAYBOOK FACTS OF LIFE: These obviously absurd choices are the product of a corrupt process that includes no accountability. These organizations (FIFA, IOC, etc.) are Eurocentric, if not blatantly anti-American. As a wise young friend e-mails, "These bids are like a modern day 'Concert of Europe.' And we certainly aren't Prince Metternich, despite what we may think."

Lots of people consider Qatar a poor choice for the World Cup, but not because it's not America. Or because they are secretly pro-terrorist! Or because Mossad said something bad about them in a secret cable! It's considered a poor choice because it is a tiny nation with no soccer team of its own. Also it's a desert with high summer temperatures and they pump absurd amounts of CO2 into the atmosphere. And it's full of foreign-born indentured servants with very few rights. And you're not allowed to drink booze in public. But "being two-faced in the War on Terror" is pretty far down the list of reasons why this might be a bad idea.

Also, FIFA is a Zurich-based international organization, so calling it "anti-American" is pretty much a non sequitur. As for "Eurocentric," much of Europe is very disappointed in FIFA for awarding a World Cup to Qatar. (Qatar is not in Europe.) And Russia, despite its own problems, is not an "obviously absurd choice," because it's a massive world power that loves soccer. Also, your "wise young friend" sounds insufferable.

The other nations bidding for 2022 were the U.S., Australia, Japan or South Korea. All would've been fine choices, though the fact that Japan and South Korea co-hosted it in 2002 probably disqualified them, and the U.S., unlike the rest of those nations, is not a country that cares about soccer. So if Mike Allen could put aside the jingoism and Islamophobia for a moment, he would perhaps see that he should really be outraged on behalf of Australia, which has never hosted a World Cup and which put together what was, by most accounts, a pretty good bid.