Widely regarded as one of the best players never to make the Hall of Fame, he was perfect for Chicago 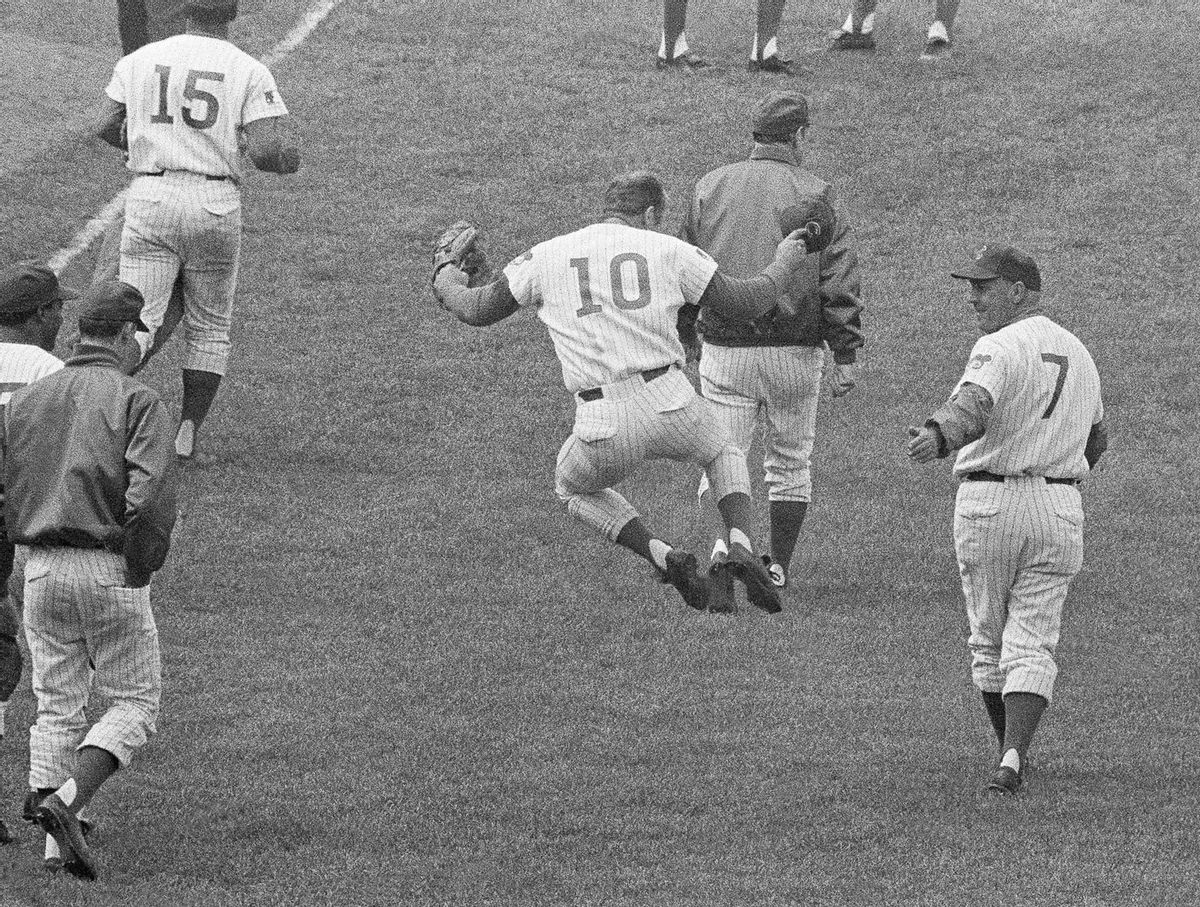 FILE - This June 24, 1969, file photo, shows Chicago Cubs third baseman Ron Santo (10) clicking his heels on the way to the locker room after his ninth-inning sacrifice fly allowed the winning run to score for a 5-4 victory over the Pittsburgh Pirates, in Chicago. Santo died Thursday, Dec. 2, 2010, in an Arizona hospital from complications of bladder cancer. He was 70. (AP Photo) (Anonymous)
--

I heard the news in the dark early this morning. I was on the stationary bicycle, huffing and puffing, with the TV simulcast of the Mike & Mike ESPN Radio broadcast on. The SportsCenter cutaway announcer came on and said, "Sad news from Chicago..."

I knew what she was going to say.

There've been two Chicagoans whom I've pre-mourned in my life. That is, the two of them were getting on in years and it was only a matter of time before some news announcer would say, Sad news from Chicago. They both meant so much to me; in fact either could have been the father I wished I had. Both of them would have been heaven. One was Studs Terkel. The other died Thursday.

Before the two died, I'd think ahead to how I'd feel when I'd hear the news. Once or twice I'd even find myself with wet eyes. I knew them both -- not well, but strangely enough, intimately. In the case of Studs, his whole life had been laid bare in the books he'd written, my favorite of which was "Talking To Myself." In the case of Ronald Edward Santo, I'd spent a month with him in the summer of 2000, eating with him, watching him rage, witnessing him charm men and women alike, recoiling in horror as he'd bark at innocent passersby merely because he was teed off about something stupid his beloved Cubs had done. And in the 40 years he'd been associated with that silly baseball team, he'd been made mad by their stupidity more times than the world's combined computer capacity can calculate.

The ESPN cutaway announcer continued: "Cubs legend Ron Santo has passed away." I stopped pedaling and called Benny Jay even though it was 6 in the morning, his time. I called his office phone, not his cellphone. I didn't want to scare him witless, waking him up with news that someone had died. He'd get to the message soon enough. I just needed to tell somebody, even if it was only the voicemail software on his cellphone provider's server. "Santo's dead," I said. "It's really, really sad."

He had a long life, a great life. Played major league baseball. Was an All-Star. Had fun. Loved pizza. Made more money after he retired from the game than he made in it. Then, for the last two decades of his life, sat in the radio booth high above home plate, trying to will the Cubs to win. But he couldn't do it, no matter how hard he tried, no matter how loud he roared, no matter how broken his heart always was by that silly, stupid team. Maybe only an omnipotent deity can will the Cubs to win. Then again, it's possible even the creator of the universe lacks the power to bend nature's rules so much.

Yep, it was a great life, albeit one with two gaping holes in it, one very personal and the other shared with millions of Chicagoans and countless emigres thereof. Santo never made the Hall of Fame. And that silly, stupid team never even got to the World Series, much less won one.

I'd try to imagine how Santo would react if the Cubs had won the Series. I'd envision them winning on a seventh-game, bottom-of-the-ninth grand slam over the Yankees at Wrigley Field, natch. I'd picture the mobs of fans pouring out of the stands and whooping and leaping with glee on the Wrigley's/Tribune Company's/Ricketts' turf. And I'd see Ron Santo bawling like a baby into his radio mike.

No question about it, Santo would have blubbered. So would I.

When I was 11, Ron Santo reminded me so much of the members of my family that, for a brief moment or two, I thought maybe he was indeed my kin. He was operatically emotional, thin-skinned, prone to tantrums, as passionate as an adolescent girl, as infuriating as an adolescent boy. He sweated and got dirty. He panted like a dog when, after the long journey from home plate, he'd hoist himself up from the dirt and brush himself off on second base. That 180-foot run was a marathon for him, as it would have been for me or my brother or even Ma, who never neglected to remind us she'd been a ballplayer herself with the Orioles, a girls' team that traveled around the city in the 1930s. She'd been a shortcenter fielder, catching high popups by cupping her hands at hip level and raising her right leg high like a Rockette. When Santo'd strike out with men on base, she'd hiss, "Damned Santo! You don't have to kill the ball; just hit it! That's how I played."

Santo sold pizza. Owned his own pizzeria out in Park Ridge. He loved to tell the story about the time his delivery drivers didn't show up one Friday night so he had to tote pizzas in the trunk of his Cadillac and ring doorbells all around the northwest suburbs.

Sounds like something my own old man would have done had he owned a pizza parlor and a Caddy.

In September 1969, with the Cubs playing in Shea Stadium in New York and their first-place lead inexorably slipping away, a black cat walked past Santo as he stood in the on-deck circle. Santo merely watched the feline slink by. Neither he nor any of his teammates budged. They were powerless against the black cat. Or, more accurately, the onrushing Mets

The myth of the Cubs being cursed was cemented by that scene. It had to be Santo standing there. He was the only player, I was certain, who was an actual fan. Even Ernie Banks, bless him, mythologized the Cubs because fate had sent him Chicago's way. Had, say, the St. Louis Cardinals purchased his contract from the Kansas City Monarchs, Ernie would no doubt have extolled the friendly confines of Busch Stadium.

Not, I like to believe, Santo. He was made for Chicago. Confrontational. Brawling. Prideful. Sentimental. Sensitive. Grinning one moment, snarling the next. He never explicated his views on the disturbances on the street during the Democratic Convention in 1968 but I could see him saying, "Gosh, the police had to crack a few heads or there'd be chaos!" just as easily as saying, "I can't believe those cops were crackin' innocent kids' heads. Jeez!"

It really wouldn't have mattered which side of the fight Santo was on, as long as he was in it. Still, I couldn't see him running down the left field line of Candlestick Park or -- horrors! -- the Astrodome, kicking his heels high after a win. If fate has conspired against the Cubs for this long century and more, it also conspired to put Ron Santo of Seattle, Wash., in a Cubs uniform. And in my living room every afternoon after school.

Right where he belonged.