WikiLeaks and the sham of "public diplomacy" 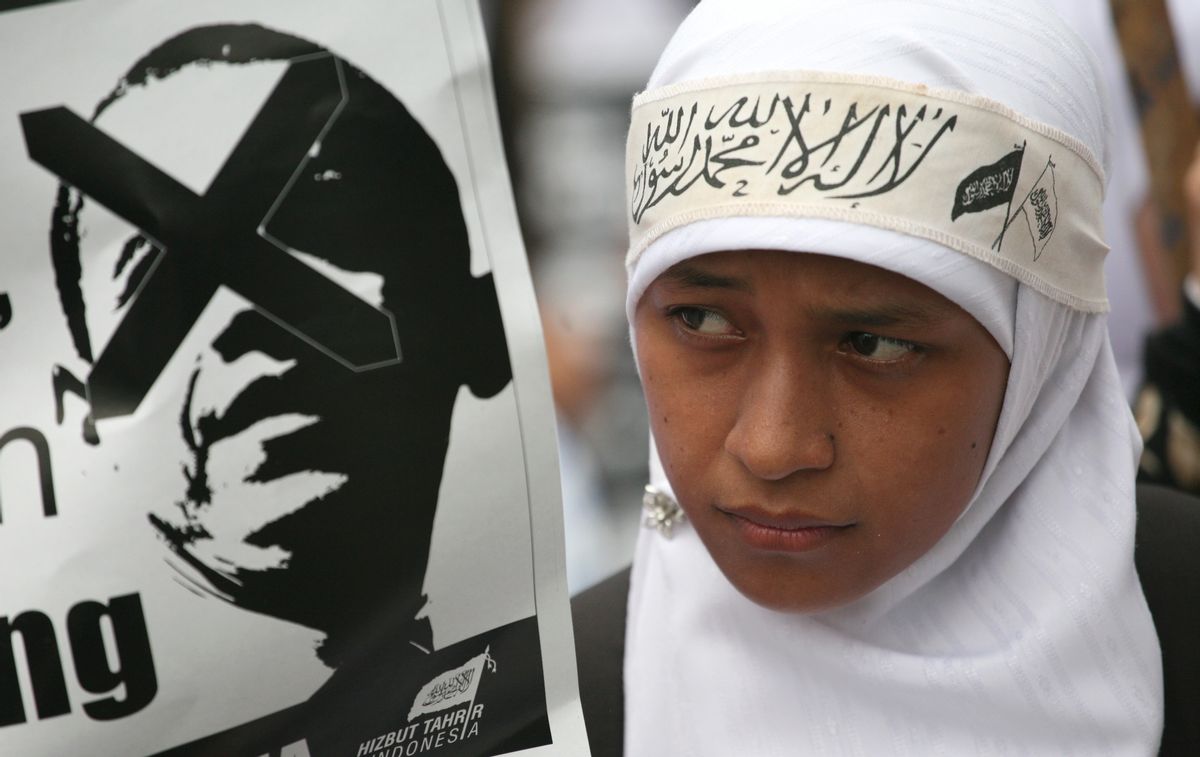 A Muslim woman displays a poster of defaced U.S. President Barack Obama during a protest against his planned visit outside the U.S. Embassy in Jakarta, Indonesia, Sunday, Nov. 7, 2010. Obama is scheduled to visit the world's most populous Muslim nation next week. (AP Photo/Dita Alangkara) (AP)
--

As the latest WikiLeaks revelations have shown, when diplomatic cables are made public they are often far from diplomatic. In fact, they aren't even good journalism.

It is shocking that in the hundreds of cables released in recent days, U.S. diplomats often repeat unverified rumors. If I tried to base a story on such information, my editors would routinely send it back to me with an admonition: "Get some better sources. Find someone to speak on the record. Verify some of this stuff."

So now the State Department is rushing to mollify foreign leaders in Italy, France, Russia, Saudi Arabia and Pakistan. This idle and unsubstantiated rumor-mongering by U.S. diplomats has shattered the brittle façade of official smiles we have dubbed "Public Diplomacy" -- a euphemism for public affairs that some also call "propaganda."

Propaganda is meant to persuade the public that black is white. Public affairs tells the public about the good things our government does while simply ignoring the bad things we sometimes do. Public diplomacy is a hybrid of the two -- explaining policies to foreign audiences with the hope of changing minds.

Winston Churchill wrote that informing the public during wartime about progress in fighting the Nazis and defending democratic civilization is a worthy and noble task. It builds hope and prepares the public for the slow and costly battle to achieve victory over evil forces.

When Edward R. Murrow was director of the U.S. Information Agency (USIA) in 1963, he told Congress that "American traditions and the American ethic require us to be truthful, but the most important reason is that truth is the best propaganda and lies are the worst. To be persuasive we must be believable ... "

However, the field of international relations that is called "public diplomacy" is a new breed of animal that emerged only in the past 15 years -- since Jesse Helms, installed as the chairman of the Senate Foreign Relations Committee after the 1994 elections, began pushing for the USIA to be absorbed by the State Department and shut down, something that officially happened in 1999.

Before that, the USIA was an open and accessible source of information set up in every international capital. It gave out official U.S. policy statements as well as fairly straightforward reports on U.S. culture, economics and politics. Foreign students, journalists and researchers found it easy to visit the American libraries attached to the USIA buildings, which were deliberately separate from the intimidating American embassies.

As a foreign correspondent in the 1980s and 1990s, I would go to USIA public affairs officers for information and to set up interviews with political officers. The American Libraries were a breath of fresh air in countries that either lacked freedom or were so poor that most journalists could not afford to buy its varied publications, dictionaries, encyclopedias and newspapers. In many cities, the USIA would obtain by fax or cable the top daily international stories from U.S. newspapers and provide free copies to many newspaper editors each morning -- a service they could not have afforded to purchase.

These days the Internet provides free access to U.S. media and State Department statements. And anti-American terrorism in recent years has made all U.S. facilities overseas less open. Had we not shuttered our USIA offices and American Libraries, visitors would have to pass a terrifying barrier of heavily armed guards, searches and security checks as they do at embassies today.

But the abolition of the USIA has caused great harm to America’s ability to tell its story to the world. To save money and consolidate U.S. international affairs under the State Department, the 2,000-strong independent agency was abolished in 1999. Its staff was now under the control of State Department bureaucrats, forced to rein in the open, informal style of their contacts with the international and U.S. media. "Public diplomacy" was thusly born.

Some -- including the conservative Heritage Foundation  -- say that the lack of a quasi-independent public affairs office that knows how to speak to the international media without resorting to deliberately confusing "State speak" has crippled efforts to reach Muslims who are subject to a global barrage of anti-American Islamist propaganda.

Our diplomats have been so enamored of their fancy toy of public diplomacy they believe if they can word a policy cleverly enough other nations will swallow it, no matter who benefits. For example, one secretary of state announced her policy would be "transformational diplomacy," which meant to the rest of the world -- if you read some of its materials -- that we would transform you. It was not widely swallowed.

Other senior public diplomacy officials circled the globe trying to persuade foreigners that they would happily accept U.S. leadership -- if only they understood what fine people we are and what great family values we had.

Another former secretary of state gave me heartburn when she stated that the United States was "the only indispensable nation." This was diplomatic? So what about my friends and colleagues in Britain,Thailand, Israel, France, India and Morocco. Are we saying they are dispensable?

Every nation has created its own unique culture, language, agriculture, architecture and religion. But too often our diplomats and other government officials are forced to wear blinders and hew to the jingoistic party line that we are the best and the only indispensable nation.

When we fought as allies in World War II, we respected the contributions of our allies. When we faced down nuclear Armageddon in the Cold War, we did so with European allies in NATO. And in fighting the Islamic terrorism of recent years, our troops mixed their blood in the soil of Iraq and Afghanistan with Afghans, Iraqis, Brits, the French, Danes, Canadians and others.

We need to restore a public voice to this country that is freed from the onerous obligation of parroting American supremacy in order to satisfy domestic political imperatives. Even if we are less indispensable than other nations -- due to our huge military, economy, standard of living and rule of law -- real public diplomacy would know not to vaunt that status.

To counter the anti-Americanism growing not just in Muslim countries but in Latin America, it is time to treat others with greater respect and to present a more humble image around the world. We must recall the fable in which the powerful lion needed a tiny mouse to remove a thorn from his paw. We may be that limping lion. And the WikiLeaks documents show us roaring aimlessly, trafficking in unverified facts while an increasingly dubious world looks on.