From the mean streets of Dublin to America's uneasy future, Salon presents our favorite novels of the year 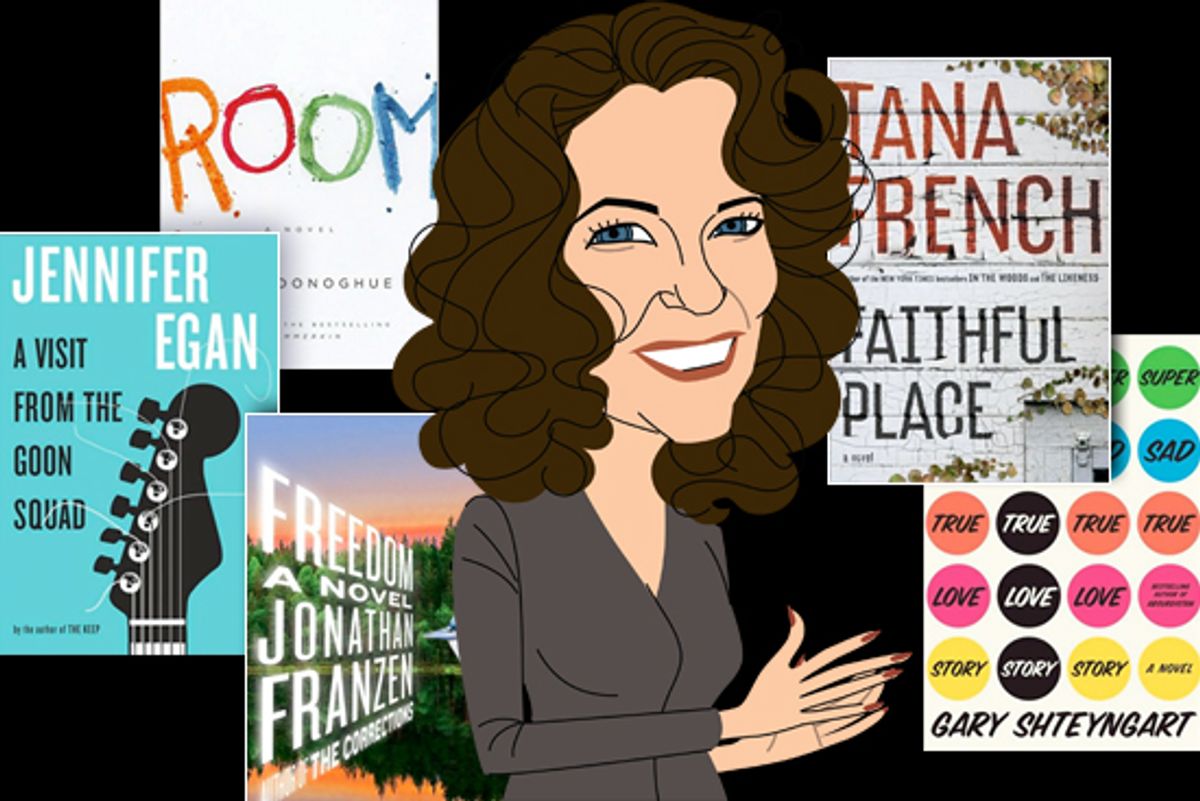 There was so much sound and fury about the critical estimation of novels in 2010, you'd think that coming up with a list of the year's best fiction would be an awfully fraught enterprise. Yet it wasn't, mostly because the five titles on this list are just so good it's impossible to be tentative about any of them. They offer great sentences and intriguing attempts to tweak the form, but above all each of these books provides an immersive reading experience -- that's been the bedrock criterion for Salon's annual best-books list for the past 15 years. To put it simply: We love these books. Were we willing to lose sleep and blow off parties just to devour another chapter or two? Did we urge copies on everybody we knew because we couldn't wait to talk about them? Will we be recommending these novels to fussy friends and relatives for years to come? Yes, yes and, again, yes. Room by Emma Donoghue
Don't be put off by the lurid-sounding premise of this novel; it's narrated by a little boy who has spent every moment of the first five years of his life in the 11-by-11-foot outbuilding where he and his mother are held prisoner by a man he knows only as Old Nick. Jack's Ma has protected and nurtured him so fiercely the boy has no idea how stunted their circumstances are; she's created an astonishingly rich world to share with him. Then hints of an impending crisis prompt Ma to train Jack for a desperate escape plan. Their bid for freedom makes for plenty of suspense, but it's after Jack and Ma break out that "Room" ripens into a truly profound work, a meditation on the interplay between innocence and experience and on the paradoxes and reversals of mother-child love.
READ SALON'S REVIEW A Visit From the Goon Squad by Jennifer Egan
A woman steals her date's wallet. Two teenage girls make the punk scene with a lecherous record producer in 1970s San Francisco. A disintegrating family goes on an African safari. A once-powerful New York publicist agrees to work for a sinister dictator. An exhaustively target-marketed concert -- in a near-future America in which toddlers have become the premiere tastemakers -- takes an improbable turn toward the transcendent. Each chapter of Egan's novel at first seems only tangentially connected to the others, but as the book unfolds, jumping back and forth chronologically, these stories miraculously knit together into a many-faceted epic about popular music (so glorious, and yet so sordid!) and the dirty tricks and rough justice of time itself.
READ SALON'S INTERVIEW WITH JENNIFER EGAN Freedom by Jonathan Franzen
After the dust cleared -- once the cover stories had run, the concerns had been raised and the h8rs had finished their howling -- what remained were the hours we spent utterly transfixed by the story of the Berglund family and their flailing attempts to reconcile conscience and contentment in Bush-era America. Mere plot summary can't convey the scope, humor, pathos and intelligence of this novel as it ranges through gentrification, YouTube, environmentalism, neoconservatism and the Iraq war, as well as such perennial concerns as parenthood, betrayal, sex, self-doubt, contrition and that most confounding and demanding of institutions, marriage. Filled with breathtaking prose and often painfully astute observations about contemporary life, "Freedom" is above all populated by characters who seem impossibly, miraculously, astonishingly real.
READ SALON'S REVIEW Faithful Place by Tana French
In French's hands, the crime novel (this is her third) is transformed from a serviceable entertainment into a supple instrument for investigating the unfathomable mysteries of the human condition. Detective Frank Mackey gets dragged back into the world he thought he'd left behind, specifically Faithful Place, a working-class Dublin street where everybody resents tall poppies, big dreams and cops. A suitcase discovered in an abandoned building suggests that Frank's first love didn't abandon him, as he has long believed, but may have met a darker fate. Figuring out what really happened 22 years ago forces Frank back into the toxic embrace of his family and a reckoning with his own equivocations and denial. As with all of French's novels, the real puzzle lies in the dark heart of the detective himself.
READ SALON'S REVIEW Super Sad True Love Story by Gary Shteyngart
Not too many years from now, in an America teetering on the brink of political and economic collapse, where people carry souped-up mobile devices that constantly emit, absorb and rank such data as the income, social status, physical fitness, emotional damage and "hotness" ratings of everybody in the room, an aging, nebbishy bibliophile falls in love with the young daughter of striving Korean immigrants. Is real love even possible in a society that revels in transparent jeans and a messaging service that urges its users to give up text and "switch to Images today"? What can Lenny Abramov, with his embarrassingly smelly collection of old books and his dubious blood serum cholesterol, have to offer the lovely, but self-hating Eunice Park? Shteyngart moves from the post-Soviet settings of his first two books to another faltering superpower, which turns out to be every bit as absurd. The razor edge of his social satire, however, is always in service of the fragile humanity we often seem eager to efface. Super-sad, yes, but most of all, true.
READ SALON'S REVIEW

Best Of 2010 Books Fiction Our Picks What To Read