A series of clips shows children's reactions to online culture. As a parent and pop culture junkie, I'm fascinated 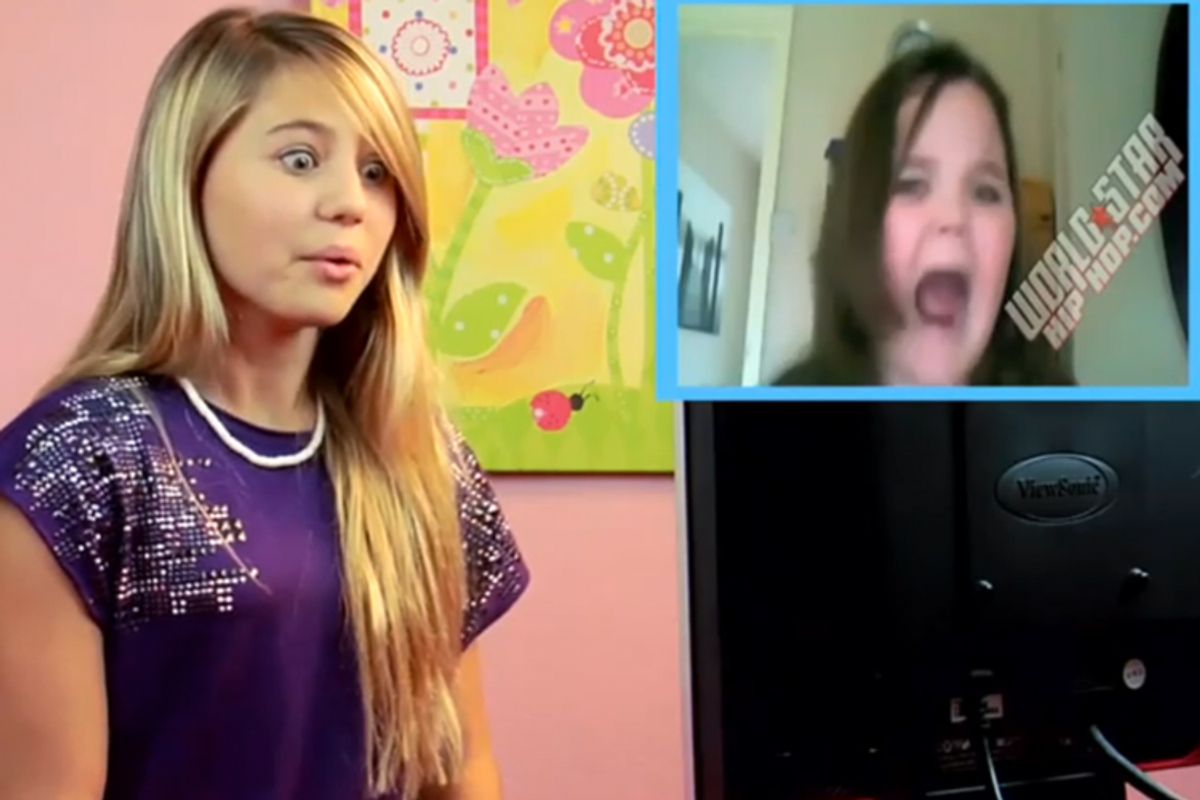 Viral videos are hilarious. Kids are hilarious. Put them together and you've got: the most hilariously meta thing that ever happened. Since October, the comedy team of the Fine Brothers – who've charmed the anti-spoiler police with collections of their fast-talking litanies of literary and cinematic giveaways -- have been bringing a little innocence back to our YouTube jaded eyes by presenting the amazed, quizzical responses of children to those oddball clips to which the rest of us have long become numb. Or as 7-year-old Emma succinctly explains, "It's raining chocolate."

In just three episodes, Kids React to Viral Videos! has become a viral sensation in its own right, prompting YouTube viewers to ponder how long before the kids will be subjected to "2 Girls, 1 Cup."  (The Fines however did expose the children to the bunny version.) And like a snake that eats its own tail -- a tail that can then eat itself -- civilization has now reached the point where we can watch children react to Chris Crocker react to Britney Spears' VMA performance -- and then, awesomely, post a reaction to the reaction to the reaction. You were right, tincerbell111, that Jake kid does seem pretty obsessed with terrorism.

My own 10- and 6-year-old daughters have seen enough viral videos to think that C. S. was the author of a series called "The Chronic WHAT? Cles of Narnia." I'm trying with varying degrees of success to teach the difference between laughing with The Maccabeats Taio Cruz send-up and simply delighting in someone else's pain.  Sure, the phrase "Charlie bit my finger" is shorthand around our house for sibling shenanigans, but I don't want my kids to grow up thinking that the whole point of the Internet is to point and laugh at the cluelessness of others.

The response video has, of course, long been a staple of viral culture; what's the point of something going worldwide if the rest of us can't throw in our own two cents? But what makes the pint-size version of the old routine unique is the sweetly unguarded way in which the kids try to process that which cannot be explained. Even when they're gigglingly asking, "Why is he crying over a rainbow?" when they're using the words "weird" and "creepy" with abandon, they're still young enough not to be the full-on haters that so many YouTube commenters already are. Even Jake, with his Bush-era stance on diplomacy ("We could just take Black Hawk jets and bomb Afghanistan"), still has abundant puppyish eagerness to please in him.

There's something about that genial freshness, the way that it teeters so close to the edge of adolescent cruelty, that makes the responses not just funny but eminently bittersweet. You need scroll down as far as the comments for the videos themselves – many along the lines of "that jake kid is retarded" and "any bets lia has already sucked off at leasst 6 people" -- to realize how easy the medium makes it to be flippantly vicious – and how capital letters are apparently a thing of the past.

While few critics could articulate the appeal of Trololo guy better than Lia's plaintive, "It won't stop," it's 9-year-old Dylan's "It makes me wanna ... turn off the TV" that's the greatest mouths-of-babes wisdom from the series. Lia, Morgan, Dylan and company are still at an age where laughing and turning the whole thing off is at the forefront of their minds. And reading some of those horrifyingly over-the-top comments directed at a bunch of kids 13 and under, it's hard not to wish more people did exactly the same.