The 4 things to know about Obama and a '12 primary

More progressive leaders are openly calling for a challenge to Obama in '12. Why he's safer than you might think 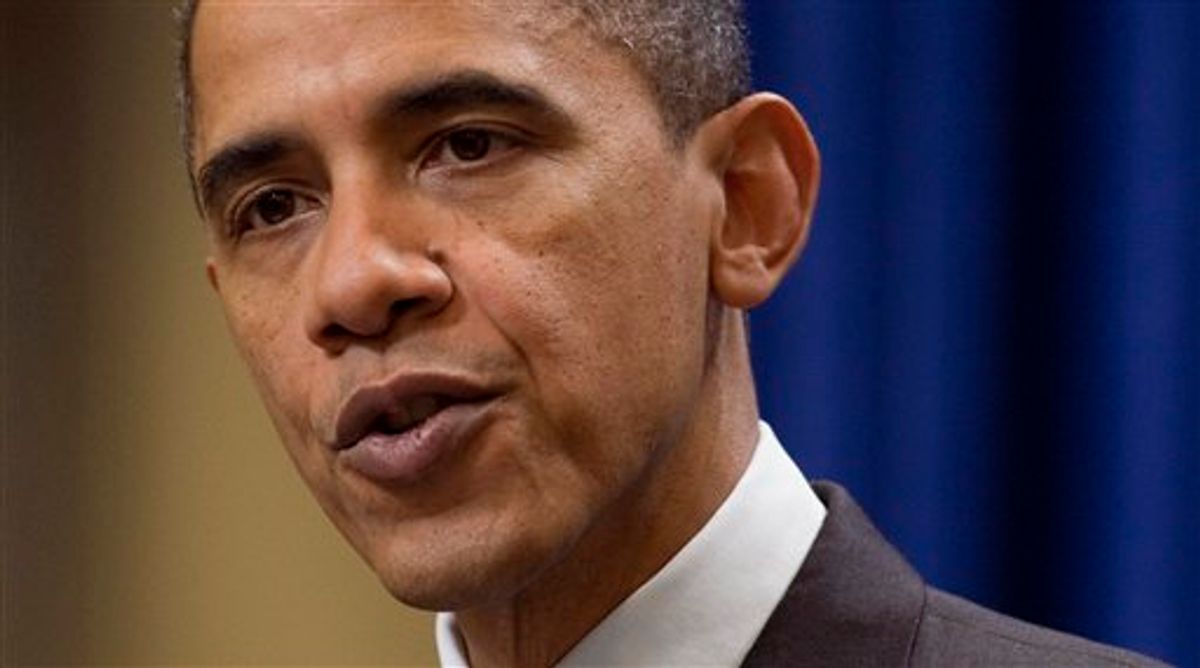 If he read much political commentary over the weekend, maybe President Obama noticed a trend: His allies (or one-time allies) on the left seem increasingly upset, and their calls for action are growing more specific.

On Saturday, Michael Lerner, the longtime progressive Jewish activist, used a Washington Post Op-Ed to urge progressives to organize a challenge to the president in the 2012 Democratic primaries -- and supplied a list of 22 potential candidates. (A sampling: Bernie Sanders, Bill Moyers and Susan Sarandon.) His call was echoed a day later by Clarence Jones, a scholar and former Martin Luther King aide, who wrote at the Huffington Post that, "[i]t is not easy to consider challenging the first African-American to be elected as President of the United States. But, regrettably, I believe that the time has come to do this."

And while he didn't address the subject of a primary challenge, Frank Rich did use his Sunday New York Times column to blast Obama as "so indistinct no one across the entire political spectrum knows who he is."

This discontent, to be sure, is completely genuine and, in many cases, well-grounded. But given that columns like these feed one of the media's favorite storylines (Who will be the Democrat who takes on Obama in '12), a reality check is probably in order: Obama is actually well-positioned to avoid a serious primary challenge in 2012. There are four main reasons why:

1. Obama is actually not that unpopular with Democrats. For all the grief he's taking from the liberal commentariat, Obama's standing with rank-and-file Democrats is actually quite strong. According to Gallup's most recent data, 81 percent of Democrats currently approve of the job he's done as president. That's 7 points higher than Bill Clinton's score after the Democrats' 1994 midterm drubbing and 5 points higher than Ronald Reagan's score among Republicans after the 1982 midterms. Notably, the last Democratic president to receive a serious primary challenge, Jimmy Carter, was at just 62 percent among Democrats at this point in his presidency -- the same score that Lyndon Johnson, who was challenged in the 1968 primaries, posted after the party was throttled in the 1966 midterms. It's possible that Obama's numbers will drop in the months ahead, particularly if opinion-shaping Democrats step up their attacks on him. But it's worth keeping in mind that opinion-shaping voices on the left have been voicing profound displeasure with Obama for some time now, but it hasn't trickled down.

2. There's no great ideological divide in the party. Yes, there is real disappointment from many prominent liberals that Obama hasn't produced more results on their issues -- or at least demonstrated more of a zest for confrontation with Republicans. But fundamentally, Democratic voters still view Obama as a guy who is on their side -- and who is up against Republican opponents who are dedicated to destroying him. And it's not that hard to frame Obama's first two years in terms that resonate strongly with the party base. Here's how Andrew Sullivan, taking issue with Rich's excoriation of Obama, tells the story of Obama's presidency to date:

The Democratic base still very much likes Obama -- and he has the message and the communication skills to stay in their good graces.

The situation was much different for Carter, who steered the party dramatically to the right (at least on domestic issues) when he was elected in 1976. His insistence on conservative fiscal policies infuriated key elements of the Democrats' old Big Labor/New Deal/Great Society coalition, which was then a much more dominant force than it is today. (Remember that Carter bested the Old Guard for the '76 nomination because he was the only candidate to fully grasp the significance of that year's radically expanded primary and caucus calendar.) From early in his presidency, when his overall poll numbers were still high, Carter faced the real threat of a challenge for the renomination in 1980 -- especially with Ted Kennedy looking for an excuse to run. This has not been the case for Obama.

Some have also suggested that Afghanistan could end up doing to Obama what Vietnam did to LBJ -- that is, turning much of the party base against him and fueling a credible primary challenge. I've previously written about why this comparison is flawed.

3. There's no big-name challenger waiting in the wings. Carter had to worry about Ted Kennedy, a certified political celebrity with a built-in national following, harnessing the Old Guard's frustration with him. LBJ was paranoid -- for good reason -- about Bobby Kennedy capitalizing on the left's Vietnam rage. When it comes to Obama, though, no one with similar stature is poised to oppose him. Hillary Clinton, obviously, would bring instant credibility to the race -- which is why, as John Bohrer noted here a while back, Obama was so smart to bring her into his administration. After Hillary, who'd be on the list? Howard Dean? Russ Feingold? Dennis Kucinich?

A Democrat with serious national ambitions will have some compelling reasons to steer clear of challenging Obama. Given the president's deep well of support among Democrats, the odds of success would be essentially nonexistent. And there'd be no moral victory, either: The party establishment would regard a primary challenge as an act of treason -- and in the event of an Obama loss in the fall, the rank and file would blame any challenger for softening him up for the Republicans. For the ambitious Democrat, better to stay loyal to the president in 2012.

To be sure, this doesn't exclude the possibility of a symbolic challenge -- like when Reps. John Ashbrook (from the right) and Pete McCloskey (from the left) both challenged Richard Nixon in the 1972 Republican primaries. Obama could well face something like this in '12. Lerner suggested this kind of effort could actually save Obama in the general election, by forcing him to the left. That logic is somewhat dubious, but at least he conceded the essential futility of a primary challenge.

4. This is the season for primary challenge chatter. Just about every president deals with this same phenomenon at this point in his presidency. The first two years of any presidency invariably disappoint at least some ideologues -- and a bad economy (and thus, poor poll numbers that suggest the president will face difficulty winning reelection) creates a sense of urgency.

Here, for instance, is an Associated Press story from January 1983, when Ronald Reagan -- who is now celebrated by the right as a symbol of pure, unyielding conservative leadership -- was presiding over a dismal economy and saddled with sub-40 percent poll numbers. Wouldn't you know it: Prominent voices on the right were calling his presidency a failure:

Hard-line conservatives will meet this weekend in Dallas to discuss complaints against the administration and perhaps lay some groundwork for challenging President Reagan if he seeks re-election in 1984.

"We've either got to fish or cut bait," said Howard Phillips, chairman of the Conservative Caucus. "Either we get some changes out of the administration or we have to go in a different direction."

Phillips said the purpose of the Dallas meeting of about 20 conservatives would be to "see if there is a consensus among conservatives about where we go from here."

Phillips and conservative publisher and fund-raiser Richard Viguerie are openly urging Reagan not to run again in 1984.

"I would think the conservative cause and the Republican Party would be better served if the president doesn't run for re-election," said Viguerie.

"If the president is not off the dime to turn this thing around in the next several weeks, I think there will be an all-out effort to persuade him not to run in 1984," said Phillips.

The angry conservatives talked about recruiting Jack Kemp, William Armstrong or Jesse Helms to an '84 race against Reagan. All three of these men, of course, knew better than to even nibble. Reagan, they realized, was still broadly popular with the GOP base -- just as Obama now is with Democrats.

Don't forget, also, that it was widely assumed after the '94 midterms that Clinton, if he even bothered to seek a second term in 1996, would face a primary challenge. The names of Jesse Jackson, Bill Bradley, Paul Tsongas and Bob Kerrey, among others, were all floated. None of them ever came close to jumping in.