In a new gambit against the WikiLeaks founder, the Swiss Post cites "false information" as invalidating the account 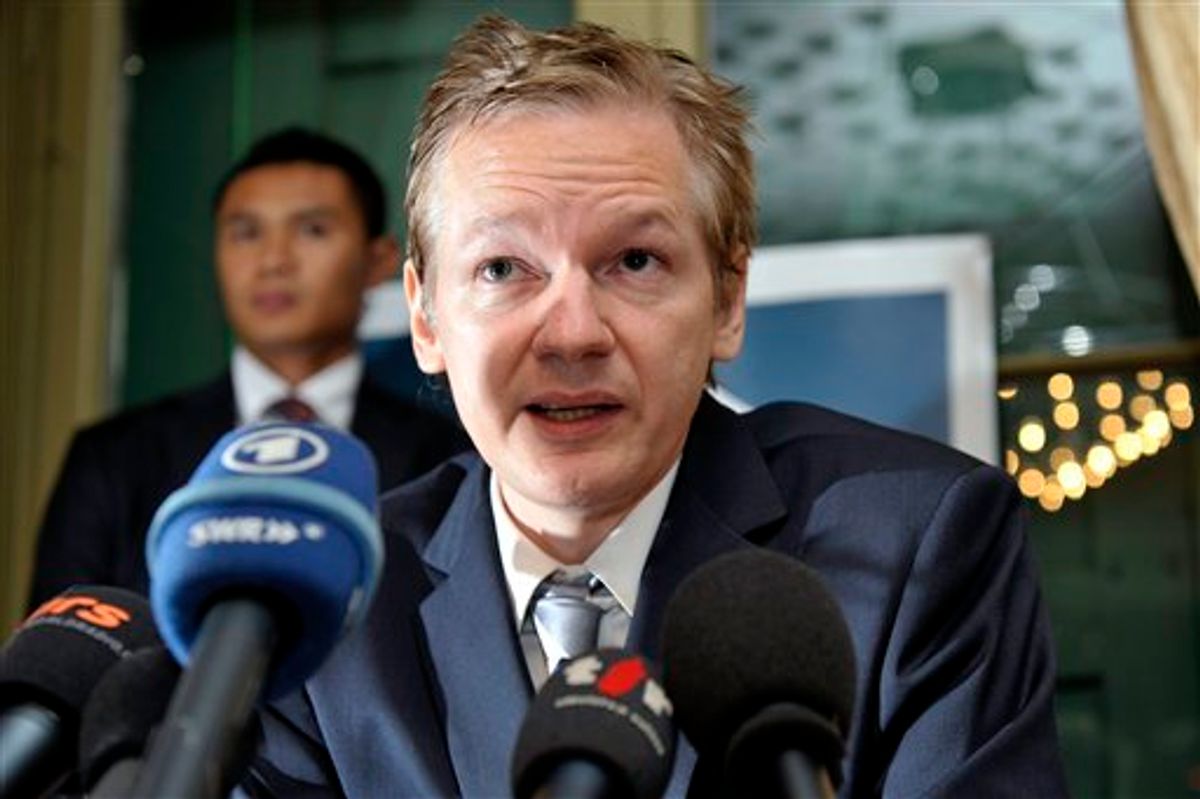 FILE - In this Nov. 4, 2010 file photo, Wikileaks founder Julian Assange speaks during a news conference at the Geneva press club, in Geneva, Switzerland. Assange is a former computer hacker who has embarrassed the U.S. government and foreign leaders with his online release of a huge trove of secret American diplomatic cables. (AP Photo/Keystone, Martial Trezzini, File) (AP)
--

The Swiss postal system stripped WikiLeaks founder Julian Assange of a key fundraising tool Monday, accusing him of lying and immediately shutting down one of his bank accounts.

The swift action by Postfinance, the financial arm of Swiss Post, came after it determined the "Australian citizen provided false information regarding his place of residence during the account opening process."

Assange had told Postfinance he lived in Geneva but could offer no proof that he was a Swiss resident, a requirement of opening such an account.

Postfinance spokesman Alex Josty told The Associated Press the account was closed Monday afternoon and there would be "no criminal consequences" for misleading authorities.

"That's his money, he will get his money back," Josty said. "We just close the account and that's it."

The setback leaves Assange with only a few options for raising money for his secret-spilling site through a Swiss-Icelandic credit card processing center and accounts in Iceland and Germany.

WikiLeaks has been under intense international scrutiny over its disclosure of a mountain of classified U.S. diplomatic cables, after previously releasing tens of thousands of classified U.S. military documents on the wars in Afghanistan and Iraq. The unprecedented disclosures have embarrassed the U.S. and other governments worldwide and prompted U.S. officials to pressure the WikiLeaks site and its facilitators.

A Swiss website, wikileaks.ch, has been handling much of the traffic from WikiLeaks after other Internet service and online payment providers began severing ties with the organization.

WikiLeaks' Swedish servers came under suspected attack again Monday, the latest in a series of online computer assaults that have knocked the secret-spilling group across the Web.

WikiLeaks, in a tweet to its followers, confirmed it was having difficulty with its PRQ severs but did not elaborate.

"We are investigating the cause," it said.

While U.S. officials are investigating whether they can charge Assange, the 39-year-old Australian faces sexual misconduct allegations connected to his stay in Sweden over the summer.

The Swedish case has been described by his British lawyer Mark Stephens as a political stunt, but it could eventually lead to his extradition from Britain to Sweden. A European arrest warrant was issued for Assange last week and it is currently working its way through the British legal system.

Extradition experts say such warrants can take weeks or even months to lead to an arrest, although high profile cases tend to move faster. The BBC said the Swedish warrant was now with London's Scotland Yard -- suggesting that matters were developing quickly.

The broadcaster didn't cite its source, and the police force declined comment.

Scotland Yard would still have to seek a warrant at Westminster and City Magistrates' Court, which handles extradition, before Assange were detained. Such a move would not be announced ahead of time.