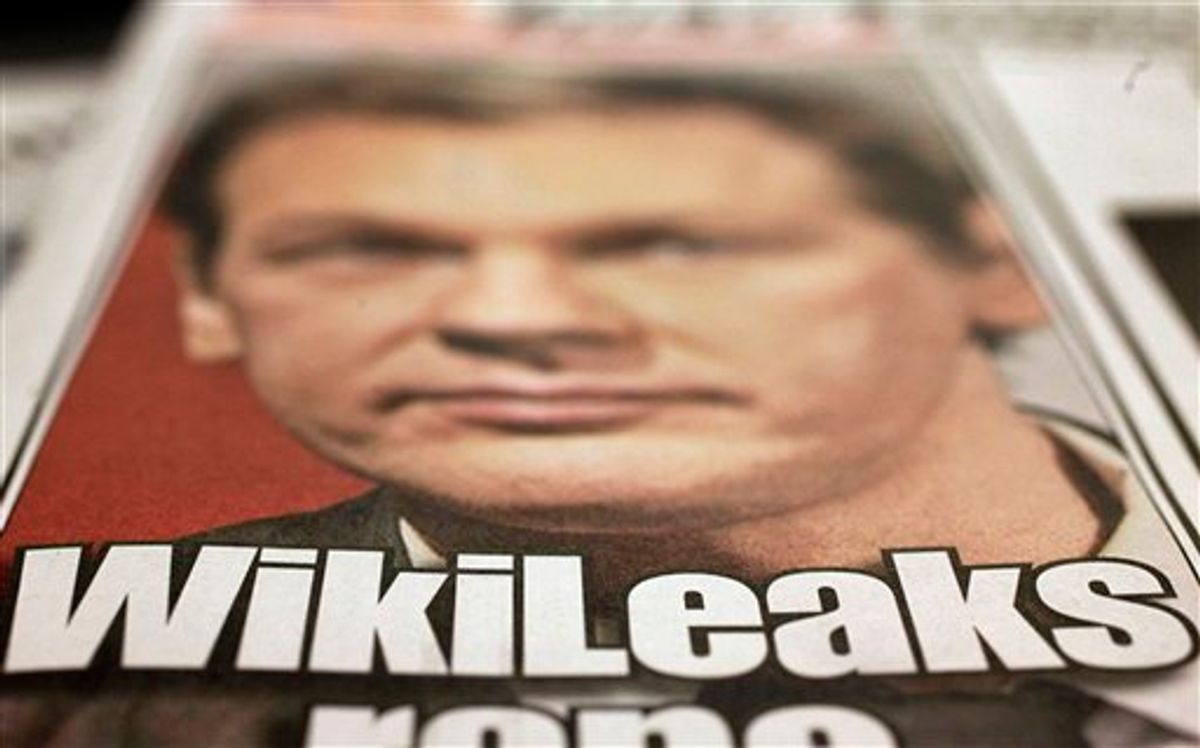 A picture of Wikileaks founder Julian Assange is shown in this photo of the cover of the Wednesday, Dec. 1, 2010 edition of the New York Post, photographed in New York, Wednesday, Dec. 1, 2010. Police ratcheted up the pressure on Assange on Wednesday, asking European officers to arrest him on rape charges as his organization continued to embarrass the Obama adminstration with a stream of leaked diplomatic cables. (AP Photo/Richard Drew) (AP)
--

WikiLeaks has never been charged with a crime, let alone indicted for one or convicted of one.  A consensus of legal experts agree that prosecuting the organization or Julian Assange for any of its leaks would be difficult in the extreme.  Despite those facts, look at just some of the punishment that has been doled out to them and what has been threatened:

Just look at what the U.S. Government and its friends are willing to do and capable of doing to someone who challenges or defies them -- all without any charges being filed or a shred of legal authority.  They've blocked access to their assets, tried to remove them from the Internet, bullied most everyone out of doing any business with them, froze the funds marked for Assange's legal defense at exactly the time that they prepare a strange international arrest warrant to be executed, repeatedly threatened him with murder, had their Australian vassals openly threaten to revoke his passport, and declared them "Terrorists" even though -- unlike the authorities who are doing all of these things -- neither Assange nor WikiLeaks ever engaged in violence, advocated violence, or caused the slaughter of civilians.

This is all grounded in the toxic mindset expressed yesterday on Meet the Press (without challenge, naturally) by GOP Sen. Minority Leader Mitch McConnell, who said of Assange:  "I think the man is a high-tech terrorist. He’s done an enormous damage to our country, and I think he needs to be prosecuted to the fullest extent of the law. And if that becomes a problem, we need to change the law."  As usual, when wielded by American authorities, the term "terrorist" means nothing more than: "those who impede or defy the will of the U.S. Government with any degree of efficacy."  Anyone who does that is, by definition, a Terrorist.  And note McConnell's typical, highly representative view that if someone he wants to punish isn't a criminal under the law, then you just "change the law" to make him one.

But that sort of legal scheming isn't even necessary.  The U.S. and its "friends" in the Western and business worlds are more than able and happy to severely punish anyone they want without the slightest basis in "law."  That's what the lawless, Wild Western World is:  political leaders punishing whomever they want without any limits, certainly without regard to bothersome concepts of "law."  Anyone who doubts that should just look at what has been done to Wikileaks and Assange over the last week.  In this series of events, there are indeed genuine and pernicious threats to basic freedom and security; they most assuredly aren't coming from WikiLeaks or Julian Assange.

People often have a hard time believing that the terms "authoritarian" and "tyranny" apply to their own government, but that's because those who meekly stay in line and remain unthreatening are never targeted by such forces.  The face of authoritarianism and tyranny reveals itself with how it responds to those who meaningfully dissent from and effectively challenge its authority:  do they act within the law or solely through the use of unconstrained force?

Yahoo News!' Michael Calderone has a very good article documenting how major American media outlets -- as always -- snapped into line with the authorities they serve by ceasing to use the term "whistle-blower" to describe WikiLeaks.

One encouraging development is the emergence of hundreds of "mirror-WikiLeaks" sites around the world which make abolishing WikiLeaks pointless; that's a good model for how to subvert Internet censorship efforts.  Those interested in doing that can find instructions here.

And here is a well-done site which asks:  "Why is WikiLeaks a Good Thing?"

UPDATE:  Just to underscore the climate of lawless initmidation that has been created:  before WikiLeaks was on many people's radars (i.e., before the Apache video release), I wrote about the war being waged on them by the Pentagon, interviewed Assange, and urged people to donate money to them.  In response, numerous people asked -- both in comments and via email -- whether they would be in danger, could incur legal liability for providing material support to Terrorism or some other crime, if they donated to WikiLeaks.  Those were American citizens expressing that fear over an organization which had never been remotely charged with any wrongdoing.

Similarly, I met several weeks ago with an individual who once worked closely with WikiLeaks, but since stopped because he feared that his country -- which has a very broad extradition treaty with the U.S. -- would arrest him and turn him over to the Americans upon request.  He knew he had violated no laws, but given that he's a foreigner, he feared -- justifiably -- that he could easily be held by the United States without charges, denied all sorts of basic rights under the Patriot Act, and otherwise be subject to a system of "justice" which recognizes few limits or liberties, especially when dealing with foreigners accused of aiding Terrorists.

All the oppressive, lawless policies of the last decade -- lawless detention, Guantanamo, disappearing people to CIA black sites, rendition, the torture regime, denial of habeas corpus, drones, assassinations, private mercenary forces, etc. -- were designed, first and foremost, to instill exactly this fear, to deter any challenge.   Many of these policies continue, and that climate of fear thus endures (see this comment from today as but one of many examples).  As the treatment just thus far of WikiLeaks and Assange demonstrates, that reaction -- though paralyzing and counter-productive -- is not irrational.  And one thing is for sure:  there is nothing the U.S. Government could do -- no matter how lawless or heinous -- which (with rare exception) would provoke the objections of the American establishment media.

UPDATE II:  Those wishing to donate to WikiLeaks can still do so here, via Options 2 (online credit card) or 3 (wire to bank in Iceland).

UPDATE III:  One more, from CNET, roughly 30 minutes ago:

As the article says, this is "a move that will dry up another source of funds for the embattled document-sharing Web site."  Remember:  this is all being done not only without any charges or convictions, but also any real prospect of charging them with a crime, because they did nothing illegal.