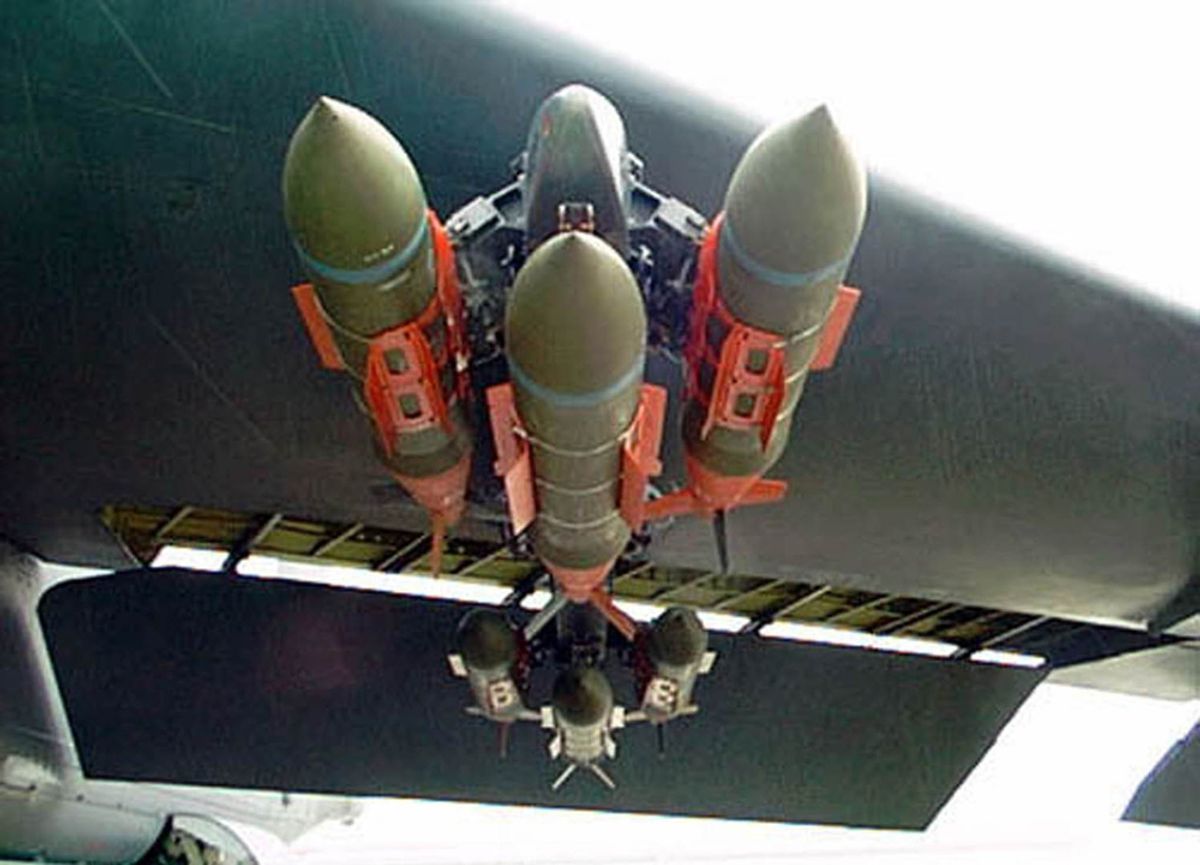 The 2,000-pound "smart" bomb that killed two U.S. special forces troops and injured 20 others in Afghanistan on December 5, 2001 is one of the most modern and precise weapons in America's military arsenal. Such "JDAMs" (joint direct attack munitions) bombs, which are dropped in both 1,000-pound and 2,000-pound versions, were developed after the 1991 Gulf War for more precise day and night use against ground targets through fog, clouds or other bad weather. A JDAM cluster is shown in this undated Air Force photograph. REUTERS/USAF/Handout RC/SV (Â© Reuters Photographer / Reuters)
--

Here's another WikiLeaked cable that offers an unfiltered look at a little-discussed aspect of American foreign policy: the Bush-era State Department panicked in 2008 after Afghanistan unexpectedly signed an international treaty banning cluster bombs, with the U.S. fearing that the military could no longer store and use the controversial weapons in Afghanistan.

The December 2008 cable followed an international summit at which Afghanistan and over 90 other countries -- not including the U.S. -- signed the Convention on Cluster Munitions (CCM), which ban the use of bombs that scatter so-called bomblets over a wide area. Some of the bomblets typically do not explode, creating a deadly hazard for civilians that can last for many years.

Because the treaty prohibits not only the use of cluster bombs, but also the storage of the munitions, the State Department was worried about the fate of the American store of the bombs in Afghanistan. So Washington sent a note to the embassy in Kabul to pressure the Afghan government on this point:

The U.S. Government believes Article 21 of the Convention provides the flexibility for signatories to continue to cooperate and conduct operations with U.S. forces, and in turn for U.S. forces to store, transfer, and use U.S. cluster munitions in the territory of a State Party. The Department requests that Post approach appropriate interlocutors at the Afghan Ministries of Foreign Affairs and Defense to urge Kabul to interpret Article 21 in a similar manner, minimizing any potential impact of Afghanistan,s signature of the Convention on U.S. operations and military cooperation. Given the political sensitivities in Afghanistan surrounding cluster munitions as well as air and artillery strikes in general, the Department believes that a low-profile approach will be the best way to ensure a common understanding that the CCM does not impede military planning and operations between our two governments.

Remarkably, one of the U.S. talking points argued that the use of cluster bombs would actually reduce civilian casualties (emphasis added).

Not allowing the use of cluster munitions will increases risk to Coalition forces engaged in combat from enemy counter-fire, reduce responsiveness, decrease the number of different targets that can be attacked within a specified timeframe, and will substantially increase risks of collateral damage by requiring usage of a greater number of large, unitary warheads to accomplish the same mission.

The Guardian has more on how the U.S. also labored to keep cluster munitions in Britain, which, like Afghanistan, signed the treaty.