The best nonfiction books of 2010

Mad Russians, scheming bond traders and an immortal woman are some of the unforgettable characters in our picks 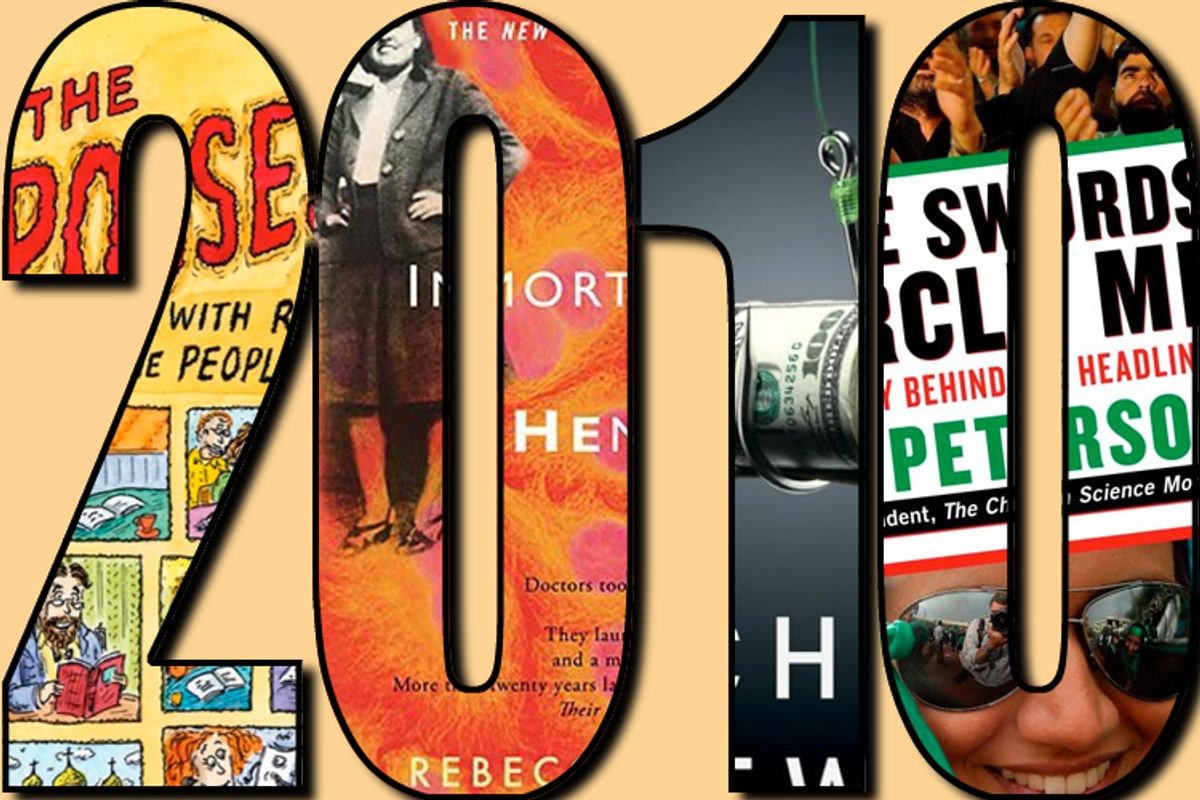 Yes, "nonfiction" is a misbegotten category that defines a mind-boggling assortment of books by what they are not. On the upside, though, when you're selecting the five best new books from a vast conglomeration that encompasses history, current events, science, biography, autobiography and more, you end up with the real crème de la crème. Here are the titles that most enchanted and best informed us in the past year. The Possessed: Adventures With Russian Books and the People Who Read Them by Elif Batuman
Think of this charming collection of essays and reportage as an idiosyncratic safari into both academia and Slavomania. Well, except for the hilarious account of Batuman's season spent studying the somewhat mythical Turkic language of "Old Uzbek" in Samarkand, a city whose bookstores carried no publications in what's supposed to be its native classical tongue. It seems that Batuman can't go anywhere without being strong-armed into judging a "best legs" contest at a Hungarian boy's camp, instructed on the finer points of Muscovite ice sculpture or invited to contemplate the metaphysical significance of Aeroflot's lost luggage department. Even in graduate school, she watched as her circle enacted the storyline of a Dostoevski novel titled "The Demons" and befriended the kind of student who ended up joining a monastery. In other words, she's a magnet for eccentrics, and they have never found a more gifted or devoted bard.
READ SALON'S REVIEW

The Big Short by Michael Lewis/I.O.U. by John Lanchester
This one's a tie because, while Lewis' impressively reported account of the careers of several players in the subprime mortgage bond meltdown turns the arcana of the financial crisis into a crackerjack story, there's still a lot of arcana. Anyone who's been dithering around in the humanities for the past couple of decades and has only the fuzziest grasp of high-altitude capitalism will get a lot more out of "The Big Short" if they first read "I.O.U." Lanchester began poking his nose into the finance industry while researching a novel, which is what he ordinary writes (and very well, too). But his astonishment at the high-wire gambits of his sources soon led to gigs writing on the subject for British literary journals. As a result, his primer on the workings of late capitalist finance is lucid, funny and written with exceptional style. The more economically literate might want to jump straight to "The Big Short," which chronicles the adventures of the handful of financiers who spotted the mortgage bubble for the Ponzi scheme it was.
READ SALON'S REVIEW OF "THE BIG SHORT" BY MICHAEL LEWIS
READ SALON'S REVIEW OF "I.O.U" BY JOHN LANCHESTER Let the Swords Encircle Me: Iran -- a Journey Behind the Headlines by Scott Peterson
Peterson's history of Iran since the revolution of 1979 will leave you much better informed about the nation that has become the United States' primary antagonist in one of the world's most volatile regions -- but that's not the main reason to read it. It is above all a captivating epic. Peterson, a reporter who has visited Iran more than 30 times and done extensive interviews with Iranians from all walks of life, weaves the many strands of his subject's individual stories into a narrative of Tolstoyan scope. A fanatical hard-liner, a womanizing businessman, a disillusioned reformer, a party-loving female student and an old Iran hand who dispenses hard-earned insights over endless cups of mint tea are among the many people whose personal experiences during the past three decades contribute to this saga. You will indeed finish "Let the Swords Encircle Me" with a far better understanding of Iran's charismatic but erratic president, its restive younger generation, its tradition of ecstatic martyrdom and its love-hate relationship with America, but you'll be too caught up in the story to notice that until after you're done.
READ SALON'S REVIEW The Immortal Life of Henrietta Lacks by Rebecca Skloot
In 1951, a sample of cancer cells was taken from an African-American woman in Baltimore's Johns Hopkins Hospital. Henrietta Lacks died not long afterward, but her cells live on, proving to be so exceptionally easy to culture that if you were to gather together all the tissue grown from them, the result would weigh 50 million metric tons. Lacks' famous cell line (christened HeLa) is now used in virtually every medical lab in the world, a remarkable scientific success story. Yet, as Skloot thoroughly and sensitively documents, Lacks' own descendants muddle through without health insurance or the education required to understand what their forebear contributed to the world. In fact, the Lackses have had a long, fraught and confused relationship with Johns Hopkins Hospital itself, characterized by mistrust on one side and condescending utilitarianism on the other. Skloot's skillful account of Henrietta's dual legacy is not, however, an indictment of particular researchers or labs. Instead, it masterfully reflects the tricky intersection of science and society and an American medical establishment responsible for both astonishing triumphs and lamentable failures.
READ SALON'S REVIEW The Warmth of Other Suns by Isabel Wilkerson
Two decades in the making, Wilkerson's monumental reinterpretation of the Great Migration -- the departure of nearly 40 percent of the South's African-American population for the North between 1915 and 1970 -- demonstrates how history can be transformed by the way we choose to frame its stories. Focusing on three individuals, each of whom moved north during a distinct phase of the migration, Wilkerson describes both the intolerably oppressive conditions they endured below the Mason-Dixon Line and the dreams they pursued in the storied cities above it. These Americans were, like the waves of white European immigrants who arrived in the U.S. during earlier periods, refugees seeking freedom and economic opportunity, and their courage and initiative changed the face of the nation.

Best Of 2010 Books Nonfiction Our Picks What To Read